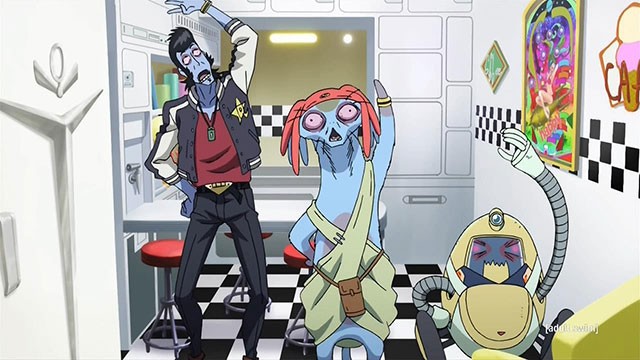 A pompadoured bounty hunter, a Betelgeusian feline and an AutoTuned vacuum cleaner voyage together across the universe in search of exotic aliens and enhanced mammaries. In the crowded competition for “weirdest show on Adult Swim,” the genre-busting international hit Space Dandy might just take the cake. This weekend’s Florida Anime Experience (floridaanime.com) at the International Palms Resort boasts an array of attractions for Japanese animation fans, including an authentic Akihabara-inspired “maid café experience” that organizer Tom Croom describes as “a fun and exciting atmosphere full of dance, games, snacks and boba tea drinks.” But the biggest draw may be voice actor Ian Sinclair, who spoke with me recently about his titular role in the Funimation series, which returns to Cartoon Network in July for its second season.

Getting started in voice acting
“I was horrible when I started out, and I can say that because I’ve directed. I know what’s good and what’s not, and I look back on my early days – I was not good. But only by building a volume of work can one ever reach their potential, so I just kind of kept plugging at it.”

Who is Space Dandy?
“He’s a dandy guy, in space. He’s a guy that goes with the flow … It’s a beautiful Zen dandy kind of lifestyle. The word ‘dandy’ has just taken on a new meaning.”

Criticism of Boobies, Space Dandy’s Hooters-like hangout
“Some people were concerned that this is a show that’s going to be nothing but this guy who’s going to a breastaurant all the time. My response to that is: Space Dandy wants to go to Boobies all the time, but he doesn’t get to do that. If he did, we wouldn’t have a show; you would have a dude in a booth smiling for 30 minutes every week. … I think a lot of that comes from them just watching the pilot and not seeing more of the series.”

Space Dandy’s unusual simultaneous English & Japanese releases
“The Japanese [animators] only delivered a couple episodes at a time, and I had no way to preview. … Because I wasn’t able to prep for the show, it was nice that this was a ‘go with the flow’ character, because it forced me to do that as an actor. Pretty much just like Dandy, I just say ‘Hey, you’re a weird alien, whatever.’ I just kind of shrug.

“We had to be immediately available at all times. If we get an episode in, we have just a few days to dub it and send it right back out to Cartoon Network. The writers who do the translation get far, far less time; I think they have only two days to take a translation and turn it into the hilarity that you see.

“We have no idea what is going to happen next. Any other anime, I can watch all of it or at least the entire season. … It helps that the episodes are so self-contained, and it isn’t a show about continuity really – that we know of. Because we have no ability to preview, you have to kind of live in the moment, and that’s the Dandy way.”

Continuity in the Space Dandy universe
“I view this show as an art piece … every single [episode] is a beautiful, complete and self-contained homage to a different style, to its own type of animation, to its own type of storytelling. It’s a beautiful art piece; each episode is its own gem. … Since nobody knows what is happening or what’s coming, the theories the kids come up with online are amazing.

“The brilliant thing about Dandy is that there’s an episode for everyone. Every single episode is so different … it’s a show that I don’t believe can be pigeonholed.”

Attending fan conventions
“I love them. I started going to conventions as a kid. I’m a nerd – I’m currently wearing a Spider-Man shirt, one of many that I own. I’ve been going to cons since I was a kid, so it was cool when I started going to them as a guest. I have no problems sharing about the process; I enjoy talking about voice acting. I’m kind of a voice acting nerd. I love all the technicalities of it. It’s an art form and it’s cool to talk about it. Normally you record something and can’t talk about it for six months … I’m getting pretty instant feedback at the cons, and it’s amazing to hear what people like about it, how they view the story. And I nerd out with them. We have some really, really smart fans.”