In Jeremy Seghers' production of 'Saint Joan,' a luminous Joan is judged by a poison gospel 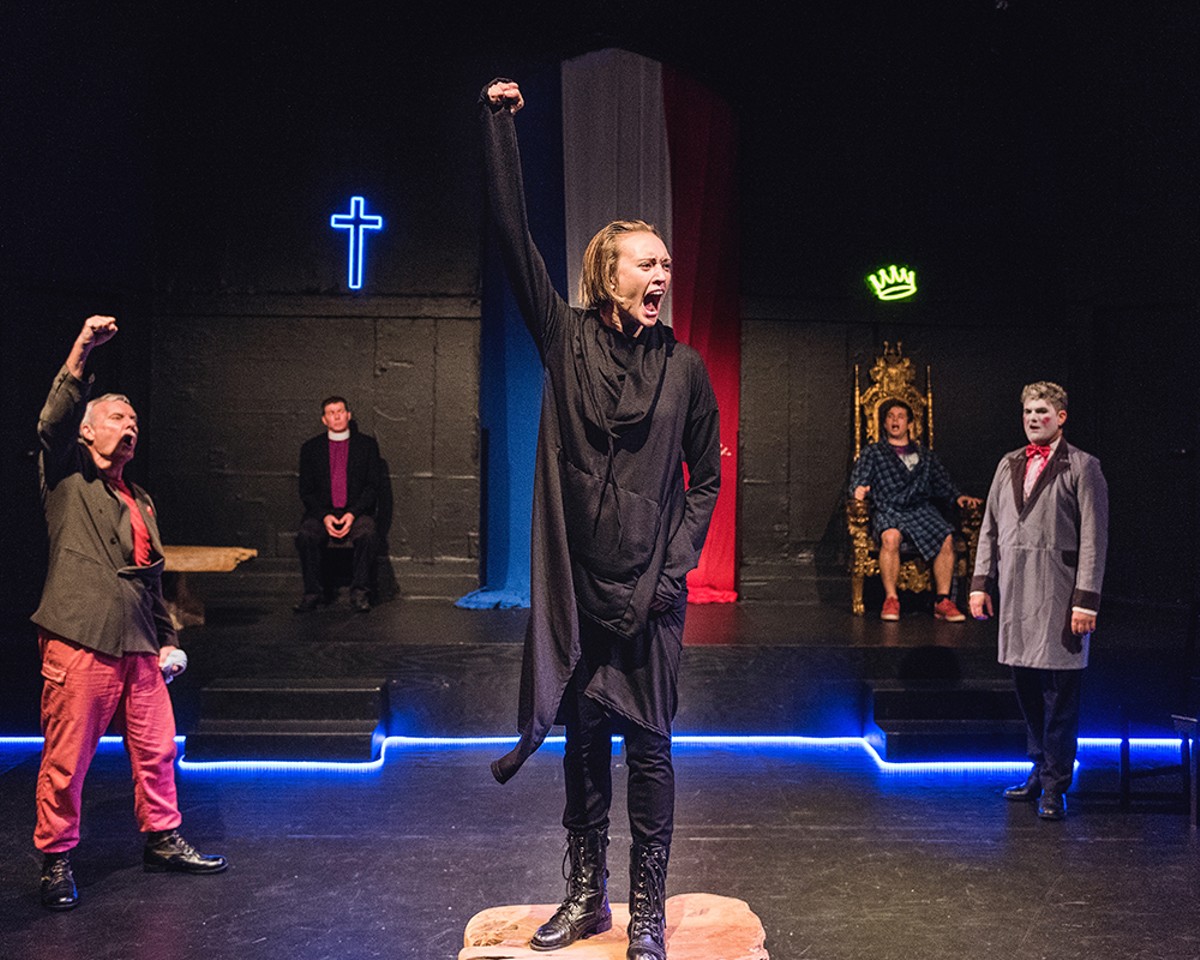 Theresa Hanson as Joan of Arc Photo by Matthew Mendel

It is a time of war, and the stability of Western civilization is being shaken by rising tides of nationalism and religious strife, which threaten to overturn the established order. A cowardly man-child is poised to assume political power when a woman dares to stand up and claim the mantle of leadership. She's selfless, strong-willed and (most importantly) almost always right on the issues. So naturally, powerful men join forces against her, undermining her authority with misogynist insults about her appearance and unsubstantiated accusations of criminal and spiritual corruption.

If this scenario sounds suspiciously similar to recent events, it only goes to show how timeless George Bernard Shaw's historical epic Saint Joan still is. "This play, written in 1923 about events that happened in the 15th century, is still relevant today because we aren't learning from history," says producer-director Jeremy Seghers, whose electrifying staging of Joan of Arc's story is running at Rollins College's Fred Stone Theatre through Saturday, Aug. 5.

"The idea of persisting in the face of complete abandonment from your allies is relevant today, especially for women," Seghers said to me after opening night of his production, "because I think our government can feel like it's turned its back on women."

Seghers earned a reputation with his productions of Equus and This Is Our Youth for intimate, edgy, site-specific shows in unconventional locations, so Saint Joan is a striking departure for him. He was drawn to the Maid of Orleans' saga of ascension, execution and eventual canonization after seeing some Joan of Arc-themed stained glass on display at a Miami museum. He picked Shaw's retelling of the tale in part because "it was kind of hard to deny the contemporary parallels," but also for the opportunity to direct a strong woman: "I've been focusing a lot on dudes and how fucked up they are, so I wanted to do something with a female lead."

Seghers initially considered staging Saint Joan inside an actual church, but chose Rollins' recently renovated Fred Stone instead because, as a former chapel, "it has enough of that church feeling." Seghers calls the theater, which is available for public rentals when school isn't in session, as "a great space [that] is under-utilized," praising its newly installed acoustical panels and resident lighting designer Kaitlyn Harrington. With scenic designer Jamie DeHay, Seghers has arranged audiences around the thrust playing space in groups of 12 "so that everyone is on a jury," and while he calls the production style "submersive rather than immersive," the viewer is never more than a few feet from the action.

At the center of that action is Joan, the Maid of Orleans herself, as heartbreakingly embodied by the luminous Theresa Hanson. A Gainesville transplant and relative newcomer to Orlando's theater community, Hanson radiates a kind of purposeful nobility and clear-eyed conviction that could easily rally an army, without losing sight of the simple teenager underneath the armor. "There is a very straightforwardness to her Joan that I connected to," says Seghers, recalling Hanson's audition. "She wasn't hysterical and weepy," instead exhibiting the militant mettle of a proto-Princess Leia or Wonder Woman. "There was just the right amount of youth and maturity in her. I got very lucky."

Hanson's passionate performance is ably supported by the ensemble, which includes Jim Cundiff, John Moughan and Colton Butcher in multiple roles. Most notably, Cole NeSmith plays the Catholic Inquisitor during the pivotal trial scene, delivering a fiery sermon against individualism that's simultaneously inspiring and insidious. NeSmith, a real-life minister in his own church, preaches this poisoned gospel with such effortless eloquence that even Joan might agree to her execution, adding a compelling complexity to the inevitable outcome. "Bernard Shaw is very clear that he didn't write the play with any villains in mind," Seghers says. "They all think they are doing what is right."

It's only fair to warn you that, at three and a half hours long (including two intermissions), Saint Joan is a marathon for both actors and audience. While conceding that the script can be wordy, Seghers hasn't edited the text or inserted fight scenes to make it more palatable, as other directors have, asking rhetorically, "Why bother doing Shaw if you are going to cut down the dialogue?" But Seghers' aesthetic imprint is evident through his production design's "mishmash and mix-up of genres and periods," which somehow incorporates archaic garb with '80s New Wave and a touch of clownish drag to "show the timelessness of the story, which could have taken place in many different time periods."

Finally, just because Joan "takes herself and everyone very seriously" doesn't mean the show is without levity; the highly theatrical acting style embraces elements of vaudeville, especially during the surreal dream sequence that serves as an extended epilogue, which provides some much-needed comedy while also creating a Brechtian distancing effect from the horror of Joan's grisly doom. "People come in expecting it to be super dark. I think people will be surprised to find themselves laughing." Just don't laugh too loudly, lest you miss a word of this thoughtful, challenging work.