The last time I spoke to artist-activist Felichia Chivaughn was in late summer 2020, during the peak of both the pre-vaccine pandemic and Black Lives Matter protests, and the co-founder of Central Florida Entertainment Entertainment Advocacy (CFEA) was “not OK.” I’m happy to report that Chivaughn is feeling much better now, as the Orlando-based director readies Katori Hall’s The Mountaintop for its run at the Garden Theatre (Friday, Jan. 21–Sunday, Feb. 6). But as I learned in my interview, she’s lost none of her passion for diversity and justice during this trying past year.

How are you doing now, and what have you been up to since our last interview?

I am well. I am grateful. Some things have changed, some things have not. But I’ve learned to keep my peace, and figure out what to focus on and where to put my energy.

Then I got to direct Sweat at Rollins. It was amazing. The students worked so hard. We really dug into this work in such a bold way. I was so grateful to be the first Black director to direct in their mainstage season. So that was special to share with those students, and I’ll never forget that.

What is new with CFEA, which advocates for local Black theater professionals?

We’re all busier than ever. Because everyone in different ways returned back to working, thankfully, we’re trying to continue our advocacy efforts, as well as get back into our arts community. Thankfully, our Black Book, [which] was one of our goals that we had, is up. So a lot of artists have booked gigs from there; a lot of theaters and entertainment companies have been able to source Black artists and actors, and artists of color.

What drew you to direct The Mountaintop, a fictionalized play imagining the last night of Dr. Martin Luther King, Jr.’s life?

My first time encountering The Mountaintop was when I performed it at a theater here in Orlando [in 2014]. I played the role of Camae in a black box theater with Clinton Harris, and it was just one of my best and most fulfilling theatrical experiences. I loved the script; I love the writing, I love the story, I love the nuances and the complex characters. 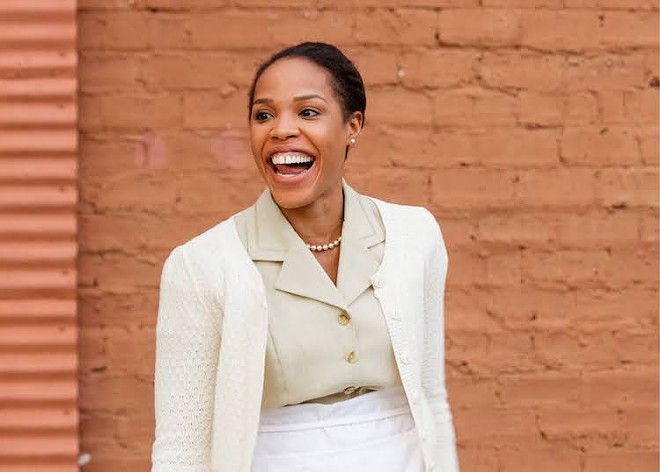 In 2020 I was on a Zoom call and [artistic director] Joseph Walsh messaged me and said, “We’re doing The Mountaintop. Will you direct it?” And I was like, “I don’t know, can I?” I know what it takes to do this show; it’s seemingly simple, but it’s a huge undertaking. It is in itself a mountain to climb.

The work that they’re doing at the Garden, they’re actually doing the things that we asked when we talked about equity and diversity and inclusion: making the table bigger; if you don’t know one, grow one. [Walsh] reached out to me and gave me this opportunity, and they’ve been providing support along the way … For it to come back again, years later, just really felt like a full-circle moment.

Was it challenging balancing the play’s fantasy elements with a revered historical figure like MLK?

I know everything that comes along with us doing anything regarding Dr. King, and so did Katori Hall, the playwright. She got a lot of criticism for taking this man off the pedestal that we love to keep him on.

When talking with the actors, when we’re working on it, we always start with what the truth is and then we go from there. So no matter if it’s a moment of magic, or a moment of vulnerability, you can find the truth in that. Whether it’s something that makes you feel like you’re floating versus something that you sit with yourself and cry about. Everything we’re doing is grounded to discover and explore that universal truth of fear, loneliness, feelings of unworthiness, mischief, curiosity, courage [and] regret.

It’s a challenge portraying someone that people are so already familiar with in their mind, because they come in wanting to see what they’ve already seen. We’re approaching it from the actor, bringing his authentic self into the shoes of this man. Really evaluating and analyzing his path, his concerns [and] his world, as opposed to just giving you an impersonation.

Where did you find your performers, Essex O’Brien (as Dr. Martin Luther King Jr.) and Anita Whitney Bennett (as Camae)?

We had an open audition, am I grateful to whatever wind blew Anita Whitney Bennett into Central Florida and whatever circumstance that allowed a very booked film actor, Essex O’Brien, to be available to do this show, because they are the perfect people for it.

Every night I leave inspired; every night I’m just amazed and in awe of their commitment, and their curiosity, and their courage, their vulnerability and their ability to listen to each other and support each other on stage. A two-person play can become a little competitive, but they are really just so in sync that it is just beautiful to see; it feels like they share breath.

How has your experience been working with the Garden Theatre’s staff, which includes CFEA members Roberta Emerson and Desiree Montes?

The people that I’ve had contact with have been so accommodating, so inviting, and really made room for my voice. I feel like they went above and beyond. Typically when there’s a show, most people don’t really advertise who it’s been directed by, nor is there such support for having your voice echoed in marketing materials. I feel like the theater was very intentional about that, so I felt so, so welcomed.

Sometimes when you do a show there are so many obstacles, because you’re coming into someone’s home. These people work at this theater all the time, and they’re very protective of it, and so there’s a fight that you have. But at the Garden, it really felt like I was coming home in a way, even though it was my first time [directing] there.

Who is The Mountaintop for?

My heart was for this show to be an invite for nontraditional theater-goers, because theater is for everyone. I really hope that this show can be that that bridge to people who may never have stepped foot in the Garden, or in any theater, that they can find that feeling of home that I felt.