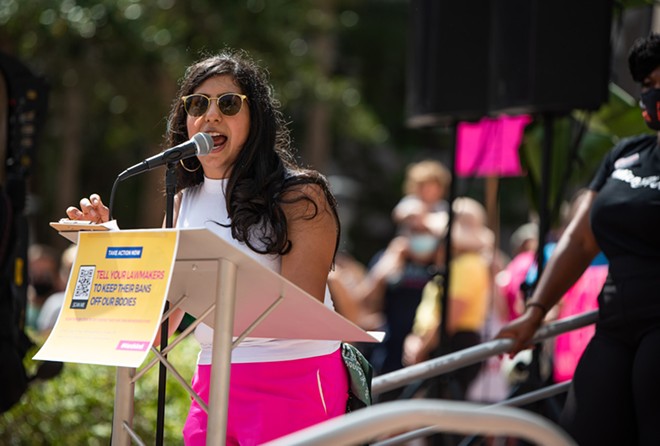 After a long year of attacks on abortion rights, Florida’s LGBTQ+ communities and the teaching of “controversial” issues in classrooms (and the faculty/teachers who facilitate it), Orlando Democrats kicked off 2023 with a rally in support of abortion access.

Under overcast skies, a crowd of about 200 people gathered downtown at Orlando City Hall early Saturday afternoon. A counter-protest was also scheduled, but ended up being just, like, five lonely people standing in front of the Bank of America building.

Saturday’s pro-choice rally, organized by State Rep. Anna Eskamani as part of a national weekend of action for abortion rights, was staged just one day before the 50th anniversary of the U.S. Supreme Court’s landmark Roe v. Wade decision, which guaranteed a constitutional right to abortion. It was just one of at least 18 planned events in Florida, including an event in Tallahassee on Sunday that's getting a visit from special guest Vice President Kamala Harris.

But the commemoration is a sober one. In June 2022, the U.S. Supreme Court overturned Roe v. Wade with their decision in Dobbs v. Jackson Women’s Health Organization, rolling back generations of reproductive rights. 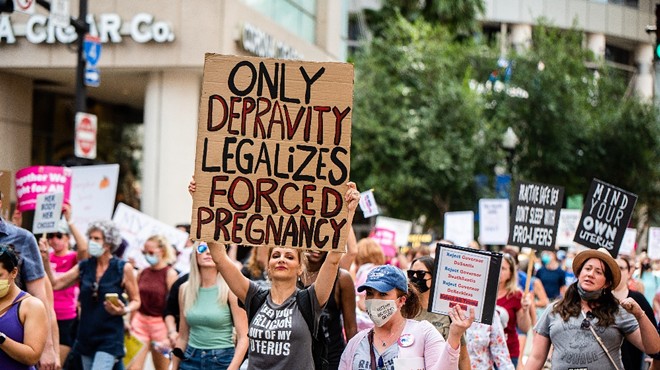 Only 48 hours after the ruling, abortion care providers had closed across nine states. Today, abortion is effectively banned in 13 states. And, according to Abortion Finder, a project of the nonprofit Power to Decide, 14 states are now without a health center that offers any abortion care, impacting more than 72 million people.

“I would not be where I am today, or who I am today, if it wasn't for my access to reproductive health,” Eskamani said. Last year, Florida's Republican-dominated legislature successfully pushed through legislation, signed by Gov. DeSantis, that bans most abortions after roughly 15 weeks of pregnancy, without exceptions for cases of rape or incest. A legal challenge to that law is being considered by the state Supreme Court, but that hasn’t stopped Republican lawmakers from teasing further restrictions.

Last week, Florida House Speaker Paul Renner told reporters, “We [the House] have a ‘pro-life’ majority,” indicating that the GOP could easily push for a stricter abortion ban this year during the 2023 legislative session. State Senate President Kathleen Passidomo, a Republican, has also voiced support for pursuing a 12-week abortion ban, this time with exceptions for victims of rape or incest.

“This is all about control,” Eskamani argued. “It was never about life. If it was about life, why don't Republicans expand Medicaid here in Florida? Why don't we pass this assault weapons ban?” Eskamani asked the crowd, earning cheers.

“This is all about control,” Rep. Anna Eskamani said, of the Republican-led effort to restrict abortion access.

Maxwell Frost, the first Gen Z and Afro-Cuban elected to Congress, was up next. He also expressed dismay with the priorities of conservative politicians who dubiously mistake generous donations from anti-abortion groups for popular support among the American populace for abortion bans.

“The first things I voted on in Washington, D.C., were two anti-freedom, anti-abortion pieces of legislation,” Frost shared. “Two things meant to rip away the freedoms and rights of our people all across this country.”

As Democrats often do, Frost — like other speakers — encouraged Floridians to get out and vote for legislators “who actually give a shit about us,” and who will “value people over profits.”

Polls from last year showed most Florida voters oppose abortion bans. Anti-abortion activists, however — including groups such as Students for Life, March for Life and Susan B. Anthony Pro-Life America — are pushing for even stricter bans in states like Florida, Virginia, North Carolina and Nebraska, per The Washington Post, as part of a campaign to recriminalize abortion procedures that's years in the making.

And it’s poor folks, Black and brown folks who are less likely to have access to generational wealth, and folks who live in abortion deserts (even prior to the fall of Roe, and after) who will be impacted the most, abortion rights advocates say. “Not only are these bans classist and sexist, they’re also racist,” said State Rep. LaVon Bracy Davis, a Democrat of West Orange County.

But several speakers on Saturday also made it clear this isn’t just about abortion access. Rather, that abortion bans are just one component of a broader conservative agenda that’s materialized in Florida — and other Republican-heavy states. Advocates say public education, LGBTQ+ rights and safety, and academic freedom (no, not DeSantis’ definition) are also on the line.

“Now, we're not only fighting these threats to our bodies, but in the state of Florida, we are fighting threats to our minds, to the freedom to learn about the complexity and wonder of difference and diversity in our world,” said Dr. Jen Sandoval, a UCF professor and chief negotiator for her union, the United Faculty of Florida at UCF. “These attacks are based in fear,” she said, “and I gotta tell you, they should be afraid, because we are not backing down.”

After about an hour, the rally officially transitioned into a cop-heavy march to the federal courthouse. Dozens of Orlando Police Department officers (reader, I did try to count) were on standby, either blocking off traffic along the route with marked and unmarked vehicles, or zipping by along the perimeters of the marching crowd on bicycles — as chants of “Whose streets? Our streets!” and “Abortion rights are human rights” reverberated down the streets of downtown.

Marchers — varying in age, race, ethnicity, disability status — were surrounded on essentially all sides by the very same public employees ostensibly involved in the process of enforcing the criminalization of abortion care. Orlando Weekly asked OPD and Rep. Eskamani’s team about who organized the police presence. The latter said police were notified of the event during the required permitting process — and thus, flagged it — but that they didn’t explicitly request they show up. One OPD officer and a sergeant on site told OW they didn’t have an answer.

Abigail, 23, drove to the Orlando march on Saturday from Republican-heavy Brevard County. It was her first time attending a rally, and she braved the trip alone, after her partner was called into work. She told Orlando Weekly it was a 2023 resolution of hers to get more politically involved, not just in work concerning abortion rights, but LGBTQ+ issues as well. “I feel like the attacks on the LGBTQ community, the attacks on abortion rights, are pretty hand in hand,” said Abigail.

Vicki Impoco and Nelly Cardinel, both self-described activists, told Orlando Weekly they’ve been involved with human rights advocacy — including the fight for reproductive rights — for decades. Impoco, of Satellite Beach, said if lawmakers fail to protect Floridians, and Americans more broadly, from abortion bans, she predicts the re-emergence of something like the Jane Collective, an underground network in the 1960s and early '70s in Chicago that illegally provided abortions pre-Roe.

“We’re here to voice our outrage” with abortion restrictions, said Impoco. “What else can we do?”

photo by McKenna Schueler
Vicki Impoco and Nelly Cardinel hold an "RIP Reproductive Rights" sign at a rally for abortion rights in downtown Orlando on Jan. 21, 2023.

Florida, the third most populous state in the country, is considered by some senior Biden administration officials to be "at the forefront of the fight" for abortion. It’s long been a safe haven of sorts for accessing abortion care in the South, as many neighboring southern states have imposed stricter regulations or bans on abortion procedures.

Last year, there were more than 68,000 abortions reported in the state of Florida, still down from 79,817 in 2021, according to data collected by the state Agency for Healthcare Administration.

While the landscape for the future of abortion access seems grim, there are also cities and states that have stepped up to blunt the impact of last year’s Supreme Court decision. Five states granted protections for abortion rights in the first post-Roe election in 2022. Some cities, like Atlanta and Philadelphia, have passed measures allocating money to donate to abortion funds in the wake of Roe's fall. The city of St. Petersburg, Florida, ismulling over the idea.

“We're going to fight until abortion is accessible for everybody, until sexual liberation is a safe reality for everybody,” Stephanie Loraine Pineiro, executive director of the Florida Access Network (an abortion fund with several offices across the state), said on Saturday.

Eskamani told Orlando Weekly that supporting abortion funds like the Florida Access Network is part of the long-term vision to support abortion access — that is, making sure financial barriers don’t exist in cases where abortion is particularly cost-prohibitive. If you’re on Medicaid, for instance — which doesn’t cover abortion care in Florida — or don’t have insurance, or don’t have any alternative funding source.

But with the 2023 legislative session just around the corner, that also means adopting the tactics to “delay, amend, destroy,” according to the Orlando Democrat. Delay legislation that further restricts abortion access; amend it to reduce the harm associated with it and to slow it down; and do what you can to destroy it.

“Marching is important,” said Eskamani. “The opportunity to come together is powerful. But it’s what happens after that makes a bigger difference.”