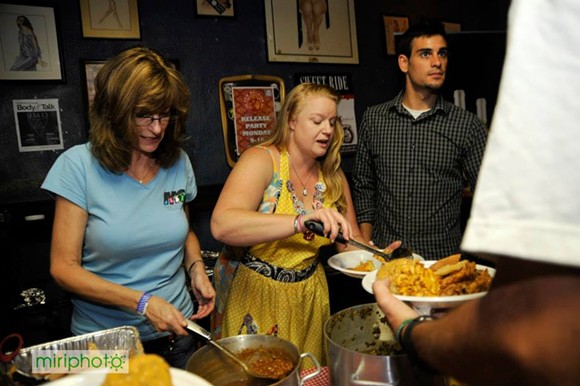 Miriphoto
Pawli (center) serving food at the 2013 Benefit for Mustard Seed of Central Florida
A few rockin’ Southern bands here, a mountain of pulled pork there, a roomful of friends around that corner and you’ve got yourself a typical Southern Fried Sunday—Orlando’s most delicious monthly music event. Under the leadership of founder Jessica Pawli, this gem originating at the Copper Rocket Maitland likely would’ve never blossomed into the Orlando staple that it’s become, which is deservingly celebrating its 10-year anniversary at Will’s Pub this Sunday.

Born out of the ashes of Honky Tonk Sundays at the Copper Rocket, Pawli seized an opportunity with the event and rebranded it as “Southern Fried Sunday” to accommodate more musical genres, such as rockabilly, alt-country, bluegrass, Americana and folk. SFS had its humble beginnings with shows that usually featured a meal, two local bands and an acoustic opener, with attendance hovering around the 50-person range. “It’s always been a community event and there’s just something to be said about sharing a meal together. It has a different feeling than going to a show,” Pawli states.

However, as word got around, the food line got bigger and the live acts got more popular. “We started to have issues at the Copper Rocket where people had to wait outside. It was like two in, two out. People couldn’t get in for the show, or we would have to take the furniture out once everyone had eaten,” Pawli remembers.

After running into one logistical hurdle after another, Pawli made the jump and moved SFS to Will’s Pub in the Mills 50 neighborhood in early 2011. “Will’s was a benefit in that it was moving it closer to the area where a lot of people were driving [from] to the Copper Rocket. It was like putting it in peoples’ backyards,” Pawli says about the enthusiasm SFS received from the Mills 50 crowd.

More space meant more freedom, and with that SFS saw more touring acts play the Will’s Pub stage, like Bright Light Social Hour from Austin, Texas, or Matt Woods from Knoxville, Tennessee. But not everything changed with the new address. Pawli continued to host the annual blowout charity event for the Mustard Seed that coincides with her birthday in July. The birthday bash would host over 15 bands across multiple Mills 50 venues and feature other activities such as a dunk tank and pin-up girl contest. Other music festivals like Music on Mills and Total Fuck Off took inspiration from Pawli’s efforts to create a multi-venue festival in the Mills corridor.

In an age when bands and bars crash and burn in the blink of an eye, it’s more than commendable that SFS has made it to the 10-year anniversary mark. Proving once again that she’s the queen of organizing shows, Pawli booked the popular rockabilly band Reverend Horton Heat to play the outside stage of Will’s Pub.

For Pawli, who started out promoting events during Orlando’s ’90s electronica heyday, the evolution of Southern Fried Sundays has been personal as well as professional. “I did some small-scale booking DJs or promoting club nights for friends, but I didn’t know that I had the kind of skill set that would allow me to organize something like this. … Without Southern Fried Sunday, I don’t think that I would’ve known that I could do those sort of things, so as the event has evolved, as the music has evolved, as the music scene has evolved, so have I,” Pawli reflects after a decade of keeping SFS afloat and moving forward.