This Little Underground: 'Purple Rain' live and the attendance myth 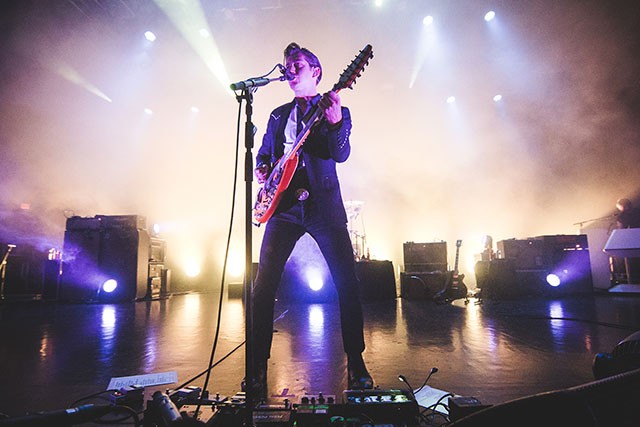 I may just have to start getting religious because, apparently, some prayers do get answered. Finally, the music of jazz titan Sam Rivers will once again be a regular live happening in the city. After two successful autumn concerts, the New Sam Rivers Rivbea Orchestra will honor the legend in grand, big-band style on the last Wednesday of every month at Will’s Pub beginning Feb. 26. Amen.

The reenactment of Purple Rain (Jan. 31, Will’s Pub) was the biggest local street-level production in some time. More than just a basic, easy cover show, this was an extravaganza that went for total transformation.

I see Orlando musician Gerald Perez (Maximino, Thee Wilt Chamberlain) out a lot. Recently, however, his billowy lion’s mane of a coif had taken on a svelte, even sassy cut. And it was all in preparation for his phoenix rise as Prince. But even that noted metamorphosis didn’t fully prepare me for the immersion of walking up on the street frontage of Will’s Pub done up like Minneapolis’ First Avenue, wading through a capacity madhouse and seeing a full local replica of the Revolution onstage.

Besides just full-on fun, this show kind of busted a big myth about live music attendance. While apathy does genuinely exist here – I’ve gone on and on about it – this happening proved that people will come if you put enough work, imagination and planning into making not just a show but an event (see: Dave Plotkin’s John Vanderslice adventure). It’s about the fire of excitement and buzz. I don’t know if it’s the Internet factor, eroding work ethic or the age of entitlement, but who exactly is responsible for sparking that seems a little confused nowadays.

Tons of work and concept went into this Purple Rain fantasy experience. And the turnout reflected that by selling out early and necessitating an on-the-spot decision to do a second show late that very night, just to accommodate all those who didn’t make the cutoff. Now that’s dope. The takeaway for musicians (and promoters)? Approach your shows like a worker and creator, not a charity case. This is rock & roll – optional with the possibility of glory – not welfare.

Another sellout earlier that night was Arctic Monkeys (Hard Rock Live). From the beginning, I liked them all right. But, more and more, I really like what they’re becoming. They’ve translated their punky hot-wire workouts, which can only go so far, into rock power that’s deeper, richer and more enduring. Instead of just a thick accent and too much caffeine, they’re now a legitimate band for the ages. And though they burst onto the scene in a blitzkrieg of hype, they’re proving to be less a blinding flash than a lasting sun.

But here’s to the Orwells, too. These Chicago kids opened things nice and right with a punk & roll sound that’s loaded with heat, scruff and hooks. More than just attitude and posture, their garage-punk brashness overflows with super-tight melodies. And they burn through ’em like cheap, inexhaustible rags. Yeah, these boys kick.

An event that caught some surprise, 11th-hour fire in my world was Talib Kweli spinning at Bullitt Bar, mainly because it’s a pretty big fuckin’ deal and a lot of people (me included) had no idea it was happening until the last minute. His credentials are heavy as an MC, not a DJ. And though his set was nothing special in turntable terms, it was musically pretty forward-thinking. Niko Is, a rising Orlando indie rapper I’ve been telling you about, opened and proved why his following is growing in size and volume. Keep your eyes on this kid.

Another nice surprise, the kind that Lil Indies specializes in, was young Illinois hillbilly trio Whistle Pigs (Jan. 29). Their old-time sound is pure bluegrass and hard folk with some assuredly blazing banjo and nice accordion dimensionality. The best testament to their live grip is the crowd that amassed throughout their performance. I recognized enough of the very eclectic gathering to be fairly certain that many of them didn’t come searching for this act, yet the passers-through were hooked nonetheless, stayed put and dug in. And by set’s end, the rapt audience was quadruple and hollering.

No. 1 party anthem: Arctic Monkeys and the Orwells at Hard Rock Live