I've found my theme! Not that a blog needs a theme, but I keep coming back to one particular point: Orlando is a great music city, whether we admit it or not. Judging by what I see in clubs night after night, the "scene" is there for the taking. There's a large and vibrant class of musically astute and creatively curious people in this town and, sure, some of 'em need Pitchfork to tell them what's good, but at least they want to know what's good, rather than simply being spoonfed radio crap.

People's evidence #1: A capacity crowd at Will's Pub for the Mountain Goats/Shearwater show (April 28) that actually watched Shearwater play, despite the fact that few people knew who they were and were there solely to see the Mountain Goats. Shearwater put on a captivating, if quiet, set and the crowd was able to follow along without yelling "Freebird" when Jonathan Meiburg whipped out his banjo or started rambling about how excited he was that they found some ivory-billed woodpeckers. It was a great set of Appalachian chamber pop that, were we the musically retarded town of popular perception, nobody would have stood still for.

People's evidence #2: A capacity crowd at The Social for the Prefuse 73/Battles show. Yes, two sold-out (or nearly sold-out) shows in the same night, both of which had seriously under-the-radar, highly adventurous music as the main attraction. Four bands in town that have probably collectively sold less than 30,000 records ever and they packed out two of this city's pre-eminent rock clubs. Self-esteem, I lift thee up! Anyway, I was told that Battles would "rock my ass off," and though I have been unimpressed by their recorded output, my ass was indeed rocked. John Stanier (Helmet, Tomahawk) is simply one of the best and most hard-working drummers in rock music, as capable of complex intricacies as he is of simply beating the shit out of his kit (sky-high cymbals and all). Abetted by a triple-guitar wash of notes and weird changes as well as sturdy keys/sequence backup, it made for a crushing bit of math-rock futurism that was heavy on the rock, but never locked into a groove of any sort. After a while, all that complexity did sort of start to blur; but maybe it was because I was exhausted and wanted to go home.

So I did. Before seeing Prefuse. And after being roundly mocked for bailing so early. Sue me. I got to see a girlfight at Bar-B-Q Bar (I didn't say I went right home), so leaving was worth it.

April 29, Iron and Wine played at The Social and it was freakish. Not the music; Sam Beam and his band delivered a set that combined sonic heft and soft-spoken subtlety and, for the most part, the sold-out crowd was more than pleased. (I did hear some complaints that indicated a preference for the stark simplicity of early I&W recordings; I was digging the new vibe.) No, what was weird was that, to make a long story short, I knew a bunch of people in Iron and Wine and didn't know it. That happens when a guy like Sam Beam (who knew me, but I didn't remember him) comes from a town like Columbia, S.C. And these weren't like casual acquaintances, either. I'm talking people in my wedding pictures. Wow. 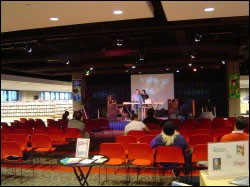 Continuing the weirdness, the afternoon of May 1 found me at the downtown branch of the Orlando Public Library watching Gestalt. Yeah, an electro-indie-pop show at the library . Apparently, the OPL is doing some sort of music series and Gestalt was part of it, sticking out like a laptop-swollen thumb among the folk and acoustic acts that make up most of the rest of the month's lineup. The laughably sparse audience, despite being almost completely composed of the homeless and the perpetually confused, was digging it. Gestalt even played a song about the library!

You'd expect a better turnout for a clutch of great local bands at a place like, say, The Social, right? Well, if you were there the night of May 1, you'd be dead fucking wrong. A phenomenal lineup – Travis Adams (from Inkwell, playing acoustic), The Julius Airwave (not technically local, but close enough), Bloom and The Band of the Name – brought the noise, but alas, only about 50 people were there to see it. I really don't understand it. Each of these bands offers something good and different and, other than the Fluffgirl Burlesque Show over at Will's, there really wasn't much else going on. I've gotta say, I was disappointed. Not just because I happen to really like all of the bands that played, but more because I feel that for a town as accepting of brave music from out-of-town bands as this one, Orlando music fans tend to disregard the possibility that homegrown talent can be just as daring and engaging.

The night of May 6 actually started in the afternoon with a way-early show at The Social (5:30 doors!) featuring The Good Life, Make Believe and Con Safos. Con Safos was indeed great, with tunes that were a bit poppy but also quite restrained and somewhat sad. Tim Kinsella's new band Make Believe still sounds like Joan of Arc, only more obnoxious. Couldn't stay for The Good Life as I had to make my way over to the always-intimate TD Waterhouse.

Now, I've never been to a Sarah McLachlan concert before, nor could I have ever foreseen a circumstance in which I would find myself at one. But there I was, because I really like the band that McLachlan's brought on tour with her, The Perishers, who were awesome. The audience gave them love after vocalist Ola Klüft charmed 'em with lines about how they'd be hanging out in Section 115 signing CDs and giving out hugs. I'm guessing their Swedish take on acoustic melancholy did a little bit in winning the crowd over too. I was sorely tempted to stay for a few minutes of McLachlan's set (just to watch the crowd), but I had to go see one of my top five favorite live bands of all time.

As I wrote in the paper, Fishbone should never have to open for any band, ever. But here I was at House of Blues and Fishbone was the opening band. Worse still, they were opening for Slightly Stoopid, a band I had heard of, but never heard, figuring with a name like that, what possible good could come of it? I was having real trouble wrapping my head around the fact that Fishbone was having to prove themselves to this batch of kids who had come out to see what was basically Sublime-lite. Whatever. Fishbone completely slayed with a set that I can only describe as weird. Obscure songs – old and new – were mixed with only a few "hits"; this mixed-up approach that Fishbone's been taking to their set lists worked fabulously. Energized by their greatness, I felt generous enough to give Slightly Stoopid a chance, and let's just say I was not surprised by what I saw. They were very courteous and gave tremendous kudos to Fishbone, but they were still totally awful.

Headed down to Will's to get my sonic palate cleansed by The Dirtbombs and it was just what the doctor ordered, as Mick Collins' version of Detroit rock & roll is always worth paying attention to. Two drummers, two bassists and a whole lot of pop hooks blasting their way through the rhythm section's voluminous din … it was amazingly powerful and they sounded absolutely great. Had I only seen Fishbone and The Dirtbombs that night, my night would have been perfectly complete. But let's just say my cup runneth a bit over, with Swedish dreamfolk, self-conscious math-spazz, stoner frat-boy dreck and charming indie-pop in the mix as well. Wow, what a crappy town we live in.

Stuck inside an office with no FM reception? Located more than five feet from Rollins College? Weary of something-to-be-desired sonics from your favorite college radio station? Well, guess who's Shoutcasting in 128kbps quality? WPRK-FM (91.5) – the best in basement radio, that's who.