Opera Orlando presents still-timely holiday tale 'All Is Calm: The Christmas Truce of 1914' 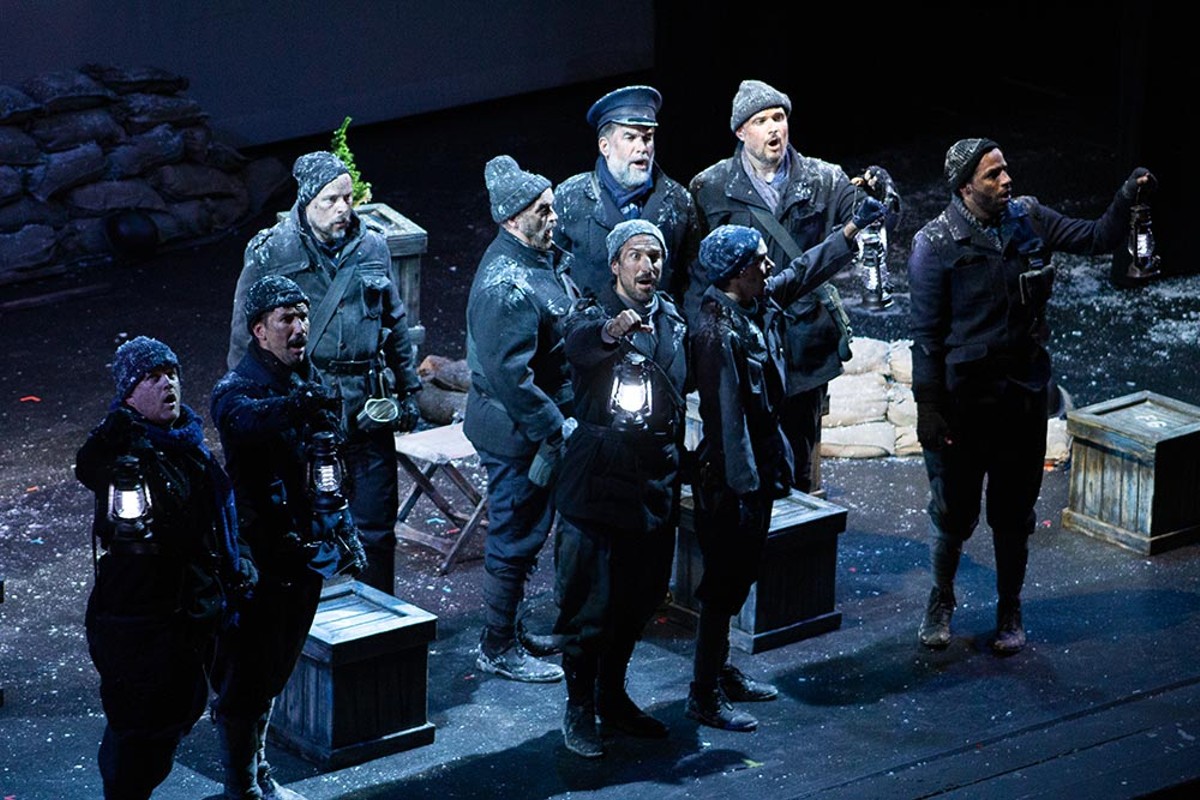 With more reports of violence and strife in the headlines this year than during any Christmastime I can recall, it's comforting to look back at a time during a Great War when opposing sides set aside their arms and embraced each other's humanity, if only for one night. I recently shared a cinnamon roll with Opera Orlando stage director Grant Preisser and music director Dr. Andrew Minear to hear how their Central Florida tour of All Is Calm: The Christmas Truce of 1914 is making opera accessible to wounded warriors and others across the region this holiday season.

All Is Calm, which Opera Orlando previously produced at the Dr. Phillips Center's Pugh Theater in 2019, was originally developed in Minneapolis by Peter Rothstein with the Cantus Vocal Ensemble and Theater Latté Da, based on authentic correspondence and a cappella carols from World War I. That first four-performance run sold out, but more importantly it connected Opera Orlando to the veterans community through their partnership with UCF Restores, which was studying music and art as therapy for PTSD.

"We just got an overwhelming response in terms of people really resonating with the production," says Preisser. "That's really what motivated us to bring it back, to expand outreach, and to try to connect with as many other veterans as we can." The result is a three-city tour that started in Lakeland's Polk Theatre and continued at Sanford's Wayne Densch Performing Arts Center before it concludes in the Dr. Phillips Center's Steinmetz Hall on Friday and Saturday, Dec. 23 and 24. 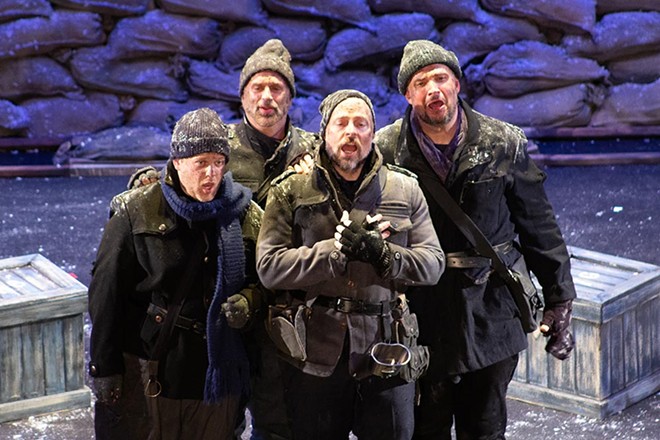 In addition to the tour stops in Lakeland and Sanford, Opera Orlando previewed the production for students at Montverde Academy and has been caroling at Veterans Administration hospitals in Lake Baldwin and Lake Nona.

"We are Orlando's opera company, but we also want to reach out to greater Central Florida," says Preisser. Still, the Steinmetz stop will certainly be the showpiece, allowing the "acoustically perfect" hall to be utilized in the unamplified concert hall configuration it's intended for. And with tickets starting at only $19 (plus a block of 200 free tickets available for veterans), it may be the cheapest admission you'll ever find to the world-class venue.

"Opera is probably the most expensive art form to produce," acknowledges Preisser. "We want as many people in Orlando to come and see opera [but] a lot of people don't give it a chance, mostly because of the sticker shock, [so we're] providing an entry-level price point."

While Preisser is obviously no stranger to Opera Orlando (he's the brother of Gabriel Preisser, the company's Grammy-winning CEO) or All Is Calm (having helmed their earlier version), Minear is a relatively recent addition to the creative team. An Orlando native and veteran Orange County Public School music educator, Minear returned to the region during the pandemic for family reasons after teaching choral conducting at the University of Alabama, and promptly founded Orlando Sings, a nonprofit choir that just celebrated its one-year anniversary.

However, Minear says his history with the Preissers goes back much further than that: "Grant and I go way back; we actually overlapped at Florida State University undergrad for one year, and sang together in the University Singers. I've known Gabe for a long time too; my mom knew him because he sang in the children's choir with her that she was leading at the time."

For potential patrons who are averse to the symphonic pomp and circumstance that usually surrounds the art form, Preisser assures, "This is not your typical opera. It's not grand opera, we don't have an orchestra." Instead, the music is created solely by the choral ensemble, which Minear says is "definitely my wheelhouse."

"I'm thrilled to be to be a part of it," Minear says, adding that "it's been a really fun challenge because there is no conductor," forcing him to devise ways for the onstage performers to establish their own pitch and tempo prior to each song. Equally as important as the music is the dialogue; each emotional monologue is signed off with the name of the real-life solider who penned it. "It just reinforces the fact that this really happened," says Preisser. "These are real people experiencing this very traumatic event, [and] then having this moment of respite and moment of humanity within no man's land."

History records that, although British and German soldiers along the Western Front did spend Christmas Eve of 1914 singing songs and playing soccer together, they soon returned to their trenches and resumed shooting at each other. That tragic truth isn't overlooked in All Is Calm, but it also doesn't extinguish the optimism that evening still inspires.

"I think that the beauty of this show is the way the soldiers speak their names [and] come to life," concludes Minear. "When you start to get to know each other on a human level, like the soldiers did when they stepped out of the trenches, [you] realize that they're just like us. And I think it's an important thing to reflect on, especially now."