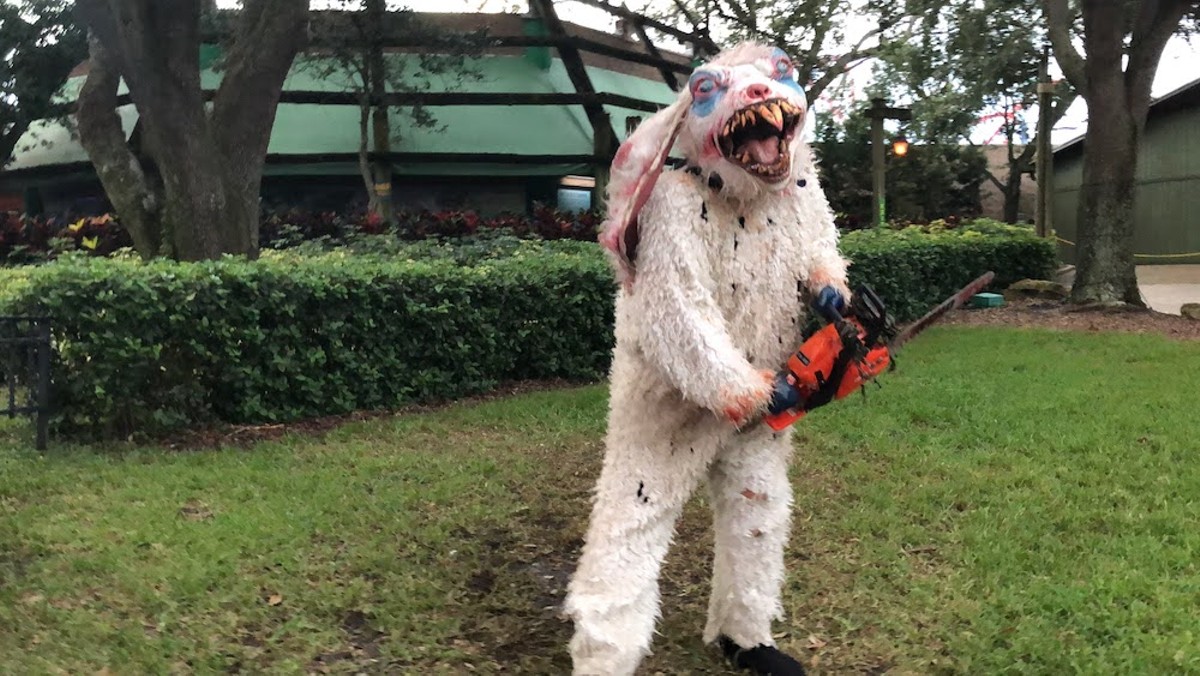 Orlando is currently in the middle of its most unusual Halloween season since 2001, and with Disney's and Universal's after-hours activities on hiatus, competitors have rushed to occupy haunt-lovers' October evenings. Recently, I've explored how independent haunted houses and drive-through events have tried to balance imaginary terrors with real-world pandemic precautions. This past week, I experienced three different Halloween attractions featuring outdoor walking trails – a fright format fit for social distancing – and found that although their budgets ranged from an independent experiment to a multimillion-dollar theme park, bigger isn't always better when it comes to boos.

Around the same time that Universal was announcing the cancellation of Halloween Horror Nights, Busch Gardens Tampa was hawking tickets for a slimmed-down Howl-O-Scream, featuring outdoor scare zones but no indoor mazes. I've always seen Busch Gardens' Halloween event as a scrappier, less polished younger sibling to HHN, and judging by the schadenfreude-soaked jabs lobbed at HHN's cancellation during HOS' satirical Fiends show, this little brother thinks this is their year to shine, but my experience on the event's opening weekend was scary in all the wrong ways.

The best part of my evening at HOS was the first couple of hours before the frightful festivities cranked up, when I got my $35 ticket's worth by riding Cobra's Curse (surprisingly snappy for a spinning family coaster) and Tigris (never never never again) for my first time, along with most of the park's other scream machines, with minimal waits. However, despite sporting signage and announcements regarding rules similar to Disney's and Universal's, social distancing in Busch's ride queues was largely ignored by guests and employees alike.

The park's 10 scare zones range in theme from a Mad Max-esque apocalypse (with motorcycles riding around) to a colorful Día De Los Muertos ofrenda to a midway of maniac clowns. At best they provide a fun photo op, if few real frights; at worst, they turn the park's poorly lit pathways into claustrophobic clusterfucks. I didn't even bother attempting the event's two new "haunted pathways," which both attracted long non-distanced conga-line queues, and was ready to flee from the flagrantly semi-masked throngs long before the witching hour. (buschgardens.com)

With a well-established, spacious outdoor venue along I-4, Sir Henry's Haunted Trail was already perfectly positioned for COVID-19, and despite a steady drizzle during the media preview, it's apparent the pandemic hasn't dampened their cast's commitment. For the first time, guests must select specific time slots and are assigned an order in which to experience the three haunts, allowing small groups to be pulsed into the paths every 30 seconds or so with minimal waiting.

While the three trails, which wind for a total of nearly a mile along uneven dirt paths, mostly follow the same route as in years past, two have new storylines and effects involving a cursed candy tree and some murderous marionettes. The third attraction, which was formerly the fantastic Ominous Descent, has been stripped of memorable set-pieces, but still provides a few shocks. Sir Henry's may not have the theme parks' movie-quality sets or makeup, but their volunteer performers make up for it with sheer enthusiasm, and a pitch-black forest is always better at concealing costumed creeps than any soundstage boo-hole.

At an hour's drive from downtown Orlando, Plant City may seem like a long way to go for a haunted walk in the woods. But even factoring in gas, I felt that Sir Henry's trio of attractions (which average out to about $10 each, depending on the night you attend) provided more boo for my buck than Busch. (sirhenryshauntedtrail.com)

Barely a month after enlisting me in their artificial afterlife experiment, Recovery, Phoenix Tears productions lured me out to Ocoee with a timely tale about a pandemic that causes society to collapse (utterly implausible, amirite?). I've been following these experimental audio dramas from writer-performer Megan Markham and director Mallory Vance since they debuted Stardust Kingdom at the 2017 Orlando Fringe Festival, and Infected is their most technically ambitious effort yet, with a dynamic soundtrack of immersive audio effects fed into each participant's wireless headphones.

During last Friday's preview performance, I followed pantomiming performers (Madison Payne, Timm Watt, Kira Silverman) along the sidewalks and back alleys surrounding Elaine Pechacek's Dragonfly Studio as we desperately tried to escape a government-imposed quarantine zone while avoiding being bitten by plague-carrying bugs. The story's pacing was a bit lopsided, with an overwhelming info-dump of exposition at the outset and an abrupt ending after an 11th-hour plot twist, but the multilayered world-building mitigated any flaws. Standing stock still in a field, hearing homicidal hornets hover so close to my ear I could practically feel them, gave me a buzz unlike any other haunt so far this season. (phoenixtearsproductions.com)