After two slow years, Orlando is about to have a ton of new rides and attractions

Image via Bioreconstruct | Twitter
A look at Dreamers Point, a new section under construction within World Celebration at Epcot
Despite omicron causing another spike in positive COVID cases, the travel and entertainment industries are experiencing something they haven’t felt in the past twenty-two months. Hope and a positive outlook for the near future seem to be permeating from every section of Orlando.

Orlando-based Darden Restaurants, the parent company of I-Drive founded Olive Garden, beat analysts' forecast when it reported strong earnings in the most recent quarter. Airports across the region are reporting crowds comparable to 2019, and the convention center has a full plate of events planned for 2022.

This optimism can also be seen at Florida’s tourist attractions. From record-breaking thrill rides on I-Drive to reimagined water rides at Tampa’s Adventure Island, after two years of barely anything new, the region is poised to make up for the quiet times in a big way come 2022.

The pandemic era wasn’t without some new attractions. Disney had welcomed Mickey and Minnie’s Runaway Railway and the Star Wars themed Rise of the Resistance just months before the pandemic. Those attractions were joined by a third new trackless ride when the long-delayed Remy’s Ratatouille Adventure opened in Epcot in the fall of 2021.

Unlike Disney and SeaWorld, which delayed most of their projects planned to open in 2020 and 2021, Universal welcomed an impressive new Bourne themed stunt show last year, just weeks after the resort came out of its extended closure, followed by the multi-launch Velocicoaster that opened this past summer. These new attractions and significant discounts for locals helped NBCUniversal recover quickly despite their California park remaining closed for more than a year. By this fall, NBCUniversal was reporting their parks were already back to making a profit. The move came at a cost, though, with little in the way of new attractions for this coming year, just as international visitors look to return to Orlando. 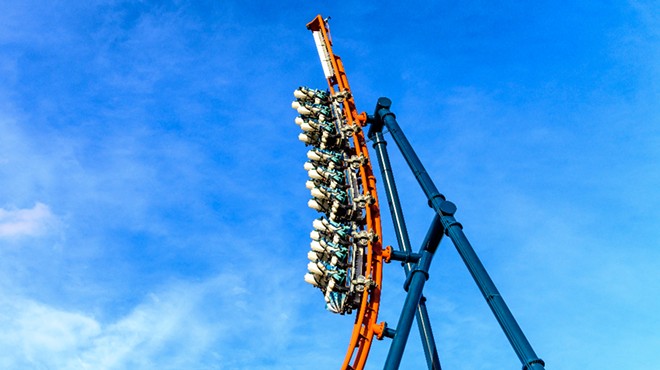 
A rumored new Harry Potter VR experience likely won’t open at Universal Studios Florida until at least 2023. It’s believed it will replace the now permanently closed Fear Factor Live audience-based stunt show. In January, Shrek 4D will also close after a nineteen-year run. Permits for the demolition of the two attractions have already been filed, indicating that Universal doesn’t plan to let these pieces of prime real estate within the park sit unused for long. Shrek replaced an Alfred Hitchcock attraction, with the switch taking six months to complete. A similar timeline for Shrek’s replacement could have a new attraction in this front area of the Studios opened by this summer. So far, Universal has yet to comment on what they plan to replace Shrek with.

By this summer, we will also see the reopening of the Revenge of the Mummy indoor coaster after its comprehensive refurbishment. This refurbishment will be the most extensive the coaster has seen since its opening in 2004.

While not the type of improvement that will generate headlines, Universal looks to be taking 2022 as a year for more minor improvements around the resort. A significant overhaul of the bus and rideshare drop-off/pick-up areas began in late 2019. This much-needed reworking will allow for higher capacity while ensuring easier access for guests arriving by bus or rideshare. There’s also work happening in CityWalk, with the space that previously housed The Groove nightclub now behind construction walls. It’s thought this large venue may be reimagined as a family entertainment center with escape rooms based on popular Universal franchises. Multiple other venues around CityWalk are also rumored to be getting replaced within the coming months. Image via Bioreconstruct | Twitter
All references to The Groove are now gone with construction walls seen outside of the former nightclub.
Disney took a more timid approach to new projects, with the company scaling back or canceling nearly a billion dollars in Parks and Resorts projects during the height of 2020. That resulted in many major projects planned for Walt Disney World’s 50th-anniversary celebration to sit untouched for months. While construction has resumed on many of these projects, others, like the Mary Poppins-themed family attraction planned for the U.K. pavilion at Epcot and the Reflections DVC resort, now look to be canceled. 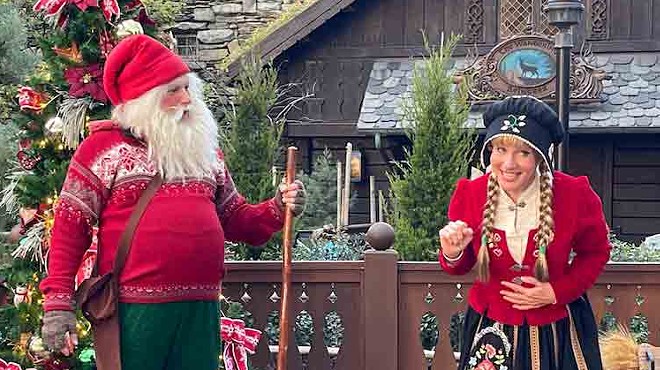 
Epcot’s major reimagining is still, slowly, moving forward. Disney has yet to share updated details and timelines for the Play Pavilion, the Circle-Vision 360 film in China, and the reworking of Spaceship Earth’s ride. While those projects look to still be on hold, other projects are pushing forward. 2022 will welcome the long-awaited Guardians of the Galaxy: Cosmic Rewind indoor coaster to the land previously known as Future World East. Now known as World Discovery, this area also recently saw the opening of the Space 220 restaurant. On the west side of the previous Future World, vertical construction has begun on the Moana-themed interactive water trail.

Image via Bioreconstruct | Twitter
The Moana Journey of Water attraction construction can be seen looking past Spaceship Earth.
This discovery trail will act as a unifier for World Nature, also home to the Seas with Nemo and the Land Pavilion. The Land Pavilion welcomed a new film just weeks before the pandemic. That film, Awesome Planet, has returned and is being discovered by many for the first time. Dreamers Point, with its life-size statue of Walt Disney, is taking shape. The new Creations Shop and Club Cool opened this past September. A new dining venue, Connections Café, will add more to this new land in 2022.

The push to make up for the delays on the Epcot projects seems to have further delayed Magic Kingdom’s new attraction. The TRON Lightcycle Run coaster has yet to be given an official opening timeline. It’s believed it will open sometime in Disney’s 2023 fiscal year, which begins in October. A tunnel for the Magic Kingdom Railroad is now under construction at the TRON site, with the train possibly opening ahead of the coaster’s opening, potentially allowing the train to reopen sometime in 2022.

Disney may have slowed down many of the projects it planned to open in 2020 and 2021, but SeaWorld Parks has sat on their completely finished new attractions for over a year now, waiting for the right moment to finally open them. That will come this spring when SeaWorld Orlando finally opens Ice Breaker. This multi-launch, multi-directional coaster was to open in the Summer of 2020. It was finished and tested, including with team members on board, but has sat unopened ever since. Image via Bioreconstruct | Twitter
Ice Breaker, seen here in early December. The coaster has sat unopened since being finished in 2020.

When Ice Breaker finally opens in February, guests coming to the park to ride it will be greeted by a new rockwork-style front marque for the park. Replacing the dated orca sign, the new rockwork signage is in keeping with SeaWorld Orlando’s other parks.

Image via Bioreconstruct | Twitter
SeaWorld Orlando's new rockwork style entrance sign can be seen under construction in this aerial photo taken in mid-December.
Like the front sign at SeaWorld Orlando, Aquatica will also see one of its most iconic elements reworked for 2022. The Dolphin Plunge dual body slides have been updated to better reflect the animal habitat riders see while on the ride. The renamed and reworked Reef Plunge will open by this spring. Joining the Commerson’s Dolphins will be a full reef of animals, including sardines and leopard sharks.

Image via SeaWorld Orlando
Concept art of the new reimagined Dolphin Plunge, now known as Reef Plunge coming to Aquatica Orlando in 2022
In Tampa, SeaWorld’s Adventure Island water park saw one of its oldest attractions, Runaway Rapids, removed to make way for a brand new dueling water slide, Rapids Racer. It will feature the world’s first dueling saucers. Guests will board the new water slides on the same platform as the Wahoo Run slide. That attraction has been enhanced with new translucent slide elements. The trippy reworking is acknowledged in the ride’s updated name, Wahoo Remix. Current plans call for both attractions to open in early 2022. Across the street at Busch Gardens Tampa, their 2020 project, Iron Gwazi, has also sat unopened despite team members and corporate staff occasionally being spotted riding it. The massive hybrid coaster will open this spring.

Winter Haven’s Legoland Resort will allow visitors to experience the famed Cypress Gardens in a way that hasn’t been possible for decades when it reopens the Garden boat tours, now themed to pirates, this spring. Also at the resort, the brand new micro-theme park, Peppa Pig Theme Park, will open this spring with more than half a dozen attractions for young visitors and their families to enjoy.

Photo via Peppa Pig Theme Park
A map of the planned attractions for Legoland's Peppa Pig Theme Park.
2022’s action isn’t just found in the area’s theme parks and water parks. Two record-breaking thrill rides opened at ICON Park on I-Drive earlier this week. The Orlando Slingshot will shoot riders more than thirty stories into the air. Next door, the Orlando Free Fall drop tower will have riders facing straight down as they plummet more than 400 feet towards the ground. The same group behind these two diabolic rides is also opening a smaller slingshot attraction in the Sunset Walk retail district at the Margaritaville Resort on Hwy 192 in Kissimmee. Image via Bioreconstruct | Twitter
ICON Park with the two new thrill rides seen on the far right.
Other new offerings are also planned for Central Florida’s smaller attractions. Kennedy Space Center will debut a space-themed flying theater as part of a larger exhibit focused on the current and future chapters of space exploration. Ripley’s Orlando odditorium will wrap up its ambitious remodeling. Pointe Orlando will also debut a remodeling that improves crowd flow through the entertainment district.

The year will also feature new details on many other projects planned for the coming years, from Universal’s Epic Universe theme park to a new skydiving attraction and museum on 192.

After two years of few new attractions, 2022 and the years following will help Orlando return to the Under Construction Forever adage the region was previously known for, and for an area that has faced so much bad news that is a welcomed change.