Everything we know about Universal's upcoming Epic Universe park

With pre-construction site work underway, in late 2019, NBCUniversal announced their most ambitious stateside theme park development in their more than 100-year history. Just as action on the site began to ramp up in 2020, the pandemic caused a multi-month pause on the project. But as 2021 wraps up, we’re now seeing significant construction starting on the site, with vertical construction on the theme park likely within the next few months. While some aspects of the 2019 proposal have since evolved, NBCUniversal seems to have remained committed to the original vision they laid out more than two years ago.

Back of house support warehouses, parking areas, and road networks are moving along significantly in their construction. That has meant the focus is now shifting to the park itself. Projects related to the park and guest areas are graded and numerous park projects have seen new permits filed in recent weeks. Based on the visible construction progress on the site, multiple areas within the park seem to be readying for foundations to be prepped in the coming weeks.

Instead of a tight, urban corridor as the gateway land to the park, Epic Universe will have a 25-acre garden-like hub area. Expansive fountains, lush landscaping, and architecture inspired by the elements are expected to make this a dream-like land with few nods to existing intellectual properties. The hub is made up of three circular corridors.

The northernmost circular corridor, where a large amphitheater and fountain can be seen in concept art, is now being formed. The fountain will sit slightly below ground level, allowing guests to see it in the distance when entering the park at the other end of the hub. This northern circle is also overlooked by the hotel. A perfect ring has been dug out, and the area graded with the staired amphitheater viewing area is now visible.

The celestial-themed hotel, the first in Orlando to offer direct theme park access, acts as the park’s back wall. The retention ponds adjacent to the hotel are complete, and work is underway on this ultra-luxury Universal hotel. Site-work and construction permits for the hotel and its guest parking garage have now been filed. Nearby a chiller plant and some backstage warehouses look to be nearly completed.

Going clockwise from the entrance plaza, guests first encounter Super Nintendo World. While Donkey Kong has been strongly rumored for this land, there was no official confirmation that Universal was developing attractions based on this Nintendo franchise. But in late September, Nintendo and Universal jointly announced a Donkey Kong mine cart roller coaster is in the works for Super Nintendo World in Japan. The announcement stated the new Osaka attraction will be the “world’s first Donkey Kong themed area,” leaving the possibility for similar lands to open after it. The artwork released as part of the September announcement is nearly identical to leaked images for a similar land planned for Orlando.

Track pieces and other elements, including elements identical to ones used in Osaka’s Donkey Kong expansion, have been seen on site at Epic Universe. Unlike Universal Studios Japan, Orlando’s Super Nintendo World will open in a single phase that will include the Mario Kart, Yoshi, and Donkey Kong based rides. The layout of the whole land has now been sectioned off with silt fencing, an indication that significant construction within this area is imminent.

There are still many unknowns surrounding the new park, believed to be at least two years away from opening, with the pandemic potentially adding another year or more to that timeline. Back in the central hub, many of the buildings have yet to be identified.

One large structure next to Super Nintendo World resembles a gift shop and may function as the exit to the land. A connected restaurant may serve items similar to the Nintendo-themed ones that debuted in Japan. Next to the land, half of what was thought to be an expansion pad has also seen movement on it, with land grading taking place in recent weeks. It’s unclear if this is an indication that another new land is planned for the park or if this will be used as a staging area for work that will take place in Super Nintendo World.

Fueling the speculation that this is a new, yet to be announced, land for the park is NBCUniversal CEO Jeff Shell's comments this summer. In speaking about what guests can expect at the new park, Shell mentions Nintendo and Dreamworks, the studio behind How to Train Your Dragon, and Illumination, the powerhouse studio behind Despicable Me, Sing, and The Secret Life of Pets. A family dark ride based on The Secret Life of Pets opened at Universal Studios Hollywood in 2019. It has proven very popular. Since its opening, there have been rumors of it being cloned in Orlando with this newly active expansion plot one potential place for it. While Despicable Me already has a ride at Universal Studios Florida, that franchise could also potentially be present in the new park. 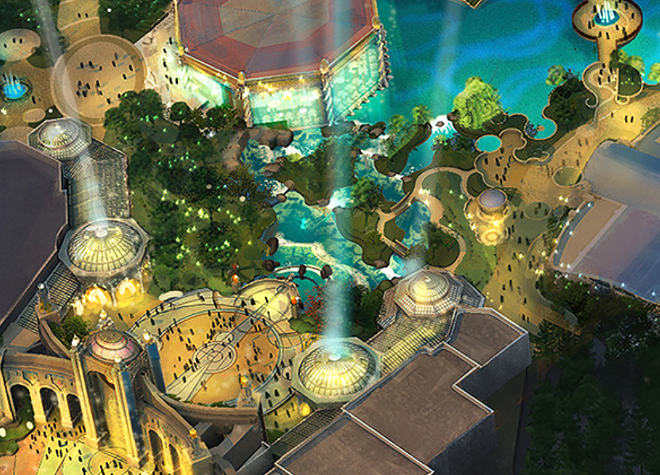 The hub holds many of the final mysteries in what to expect at the park. Multiple dining options, a dueling roller coaster, and well-manicured gardens can be seen in this area in official concept art. Another family attraction and the water fountain amphitheater round out this area that essentially serves as a fifth land to the park.

In the back corner, near the hotel and the Kirkman extension, is a Bavarian-style village. It’s believed this will be home to the classic Universal Monsters. While concept art shows an outdoor theater, recent permits confirm that it was an artistic decision to help show what this indoor theater building holds. Across the land from the theater is Frankenstein’s Castle, which houses one of the park’s tentpole attractions. Recent permits and patents uncovered by Alicia Stella, an Orlando-based theme park blogger known for her investigative journalism into Universal’s Orlando plans, show the company has recently patented a ride system nearly identical to the one that has been rumored for this area for years.

With a warehouse near the new park site and multiple ride concepts mirroring those seen in the new park, ride design firm Dynamic Attractions is thought to be heavily involved with developing many of the parks' major rides. U.K.-based ride design studio Robocoaster, which has longstanding partnership with Dynamic Attractions, debuted a ride system, the G3, that looks similar to the one now proposed by Universal. Viewed as a next-generation to the Kuka-arm based ride system found on the original Harry Potter ride, the patents confirm that while using a robotic arm similar to the KUKA ones found in Islands of Adventure, this ride vehicle will allow a wider viewing range and include an improved load/unload system.

After the park’s initial opening, Universal seems to be planning to keep the park in the media with a steady stream of new additions. A second ride in the Universal Monsters area will likely be among the first to open after the park’s initial opening. Rumors point to this being a boat ride based on the Florida-linked Creature from the Black Lagoon franchise. No major permits or site work in this area have yet to be seen.

Across the hub is a land that looks to be inspired by Paris. Believed to be themed to the French Wizarding World, this land was to have two anchor attractions.

One of the rides was a virtual reality-based broomstick riding experience. With the park delayed, that ride is now rumored to have been cut from the park and will instead replace Fear Factor Live, which permanently closed after last year’s closures. By using VR headsets, the attraction requires far less space and set production than a typical Orlando attraction. That will allow it to open ahead of Epic Universe and act as a stopgap while marketing awaits the ramp-up to the opening of the new park. Permits for other areas within this land are beginning to be published wth no action in the area of this ride. Still, so far, there’s been no indication by Universal that this proposed attraction was moved from Epic to the Studios.

The final land in Epic Universe is thought to be themed to How to Train Your Dragon. A large earthen berm has been built between this land and the park’s surface parking lot. This berm will block views of the parking lot from within the land. Other site work within the land has also begun. Patents filed by Universal ahead of the pandemic show a flying theater concept that uses ride vehicles similar to those seen on flying coasters, like SeaWorld Orlando’s Manta, with riders viewing a dome screen located below them. A family coaster, akin to Disney’s Slinky Dog Dash, circling the land can also be seen in the concept art. Recent permits and official concept art show a boat ride, likely a Splash Battle attraction by German-based ride manufacturer Mack Rides. A similar Splash Battle ride can be found at Legoland Florida. Originally opening themed to the World of Chima, that ride is now part of the LEGO Movie World. This kid-focused land will house the park’s only off-the-shelf carnival-style ride, a Gerstlauer Sky Fly.

Related A Donkey Kong land is likely coming to Universal Orlando, but first it will open in Japan

A Donkey Kong land is likely coming to Universal Orlando, but first it will open in Japan
By Ken Storey
Blogs

Early permits point to two more hotels planned for the campus. Just off-site, multiple new apartment communities and commercial plazas have opened over the past two years. Universal also earmarked another nearby section of property for a 1,000-unit affordable housing project that will provide housing within walking distance of the new park.

Epic Universe is still years away from opening, but the progress made in the past nine months has pushed the project forward in dramatic ways. This progress may not have been as visible as some fans had hoped for, it lays the groundwork for significant vertical construction to commence in the coming months. 2021 was far more similar to 2020 than was expected, but this coming year promises to bring us even further away from the threats of the pandemic. As the year progresses and we are finally able to become better anchored into the new normal, we will also see another new normal emerging in Orlando, with the region’s first major theme park since the beginning of the new millennia rising in one of the fastest-growing corners of the tourism district.