Carlo Cavaluzzi
Carlo Cavaluzzi
In a career defined by relative unpredictability, Ceremony has somehow managed to take a turn that’s just plain puzzling. Although products of punk, they’ve proven in recent years that they’re no slaves to hardcore orthodoxy. Progressively adding moody hues of gray into their sound, they’ve made a name by bucking convention. That’s why one of the last places you’d expect a defiant band that’s operated very much by its own rules to land is where they now stand with their new LP (The L-Shaped Man): a neo-Joy Division act. Not that the music is bad, it’s just perilously literal. Tally up that straight apery alongside the direct inspiration for their name (the song “Ceremony” by you know who) and this could all be verging on artistically shaky tribute-band ground here.

The thought of how this might alter the usually intense chord of their live show is probably keeping pit junkies everywhere up at night, and it looked like the nightmare might be validated when they opened their recent Orlando show (June 23, The Social) with their new sound to a floor of statues. But a band that’s pushed the brink like they have is never fully out of the game, and the minute they snapped back into their old selves, the bodies started flying again.

None of these moments happened during one of their new songs:

Carlo Cavaluzzi
Ceremony at the Social 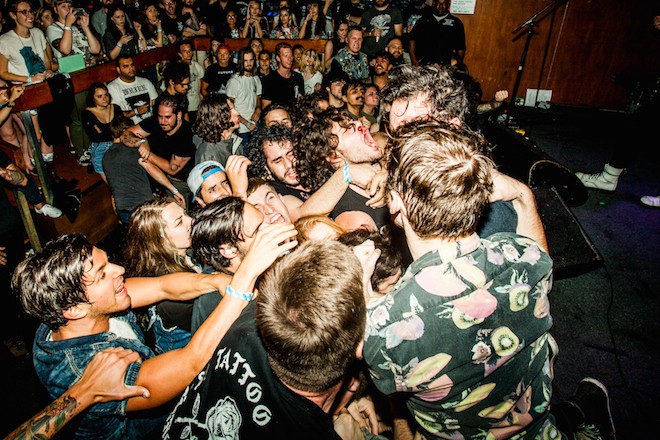 Carlo Cavaluzzi
Ceremony at the Social

Carlo Cavaluzzi
Ceremony at the Social
Overall, the bill was a notably good one with lots of quantity, variety and quality. Baltimore dream-pop band Wildhoney, for example, was excellent. A swoon of lovely flights and dizzying dives, their airy melodies coax you into the clouds only to steal your breath in a shoegaze rush when they punch the guitars.

Carlo Cavaluzzi
Wildhoney at the Social
Speaking of guitars, Tony Molina loves the shit out of ‘em. He’s got tons of sweet, straight-up melody at the core of his songs, but guitar worship dominates his band’s execution, which taps it all from the size and power of Weezer to the golden glory of Thin Lizzy.

Carlo Cavaluzzi
Tony Molina at the Social
For any pound of gut punch that Ceremony has shed in the chase of their latest muse, local openers False Punk and Gross compensated with some serious heft. These true underground heroes have built cred on torching subterranean spots around town so it’s nice to see them get on a prime stage like the Social.

Increasingly impressive in previous shows, Gross has been making more ripples lately with a buckshot spray of area performances. At this show, their metallic hardcore blasts came more assured than ever, proving their position as a band to watch out on the most thrilling extremities of modern heavy music.

Carlo Cavaluzzi
Gross at the Social
Change out frontmen and, boom, you’ve got False Punk, an entirely different band. You’ve probably heard me talk up these noise punks pretty intensely but, truth is, I had yet to see them live. Normally, because of this column, my endorsement usually stems from firsthand stage experience. But their debut mini-album Kick Rocks was just so ravagingly cogent that I signed on right then and there, giving them two Undie awards last year.

Carlo Cavaluzzi
False Punk at the Social
Still, I believe in the touchstone of live performance and have no intention in changing it. So in order to fully validate anything, rubber must meet the road. In their case, the whole damned thing – rubber, steel, flesh and bone – hit the pavement in one noisy, violent episode that managed to say everything that needed saying in 10 raging minutes. And that included a snare drum change-out. False Punk is for real, and they could be the most forceful new punk band around. 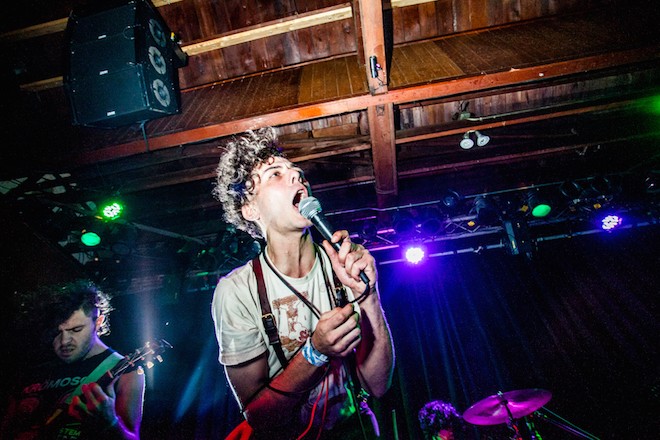