Rapper CupcakKe announces her retirement from Orlando hotel room, hours before show at the Social 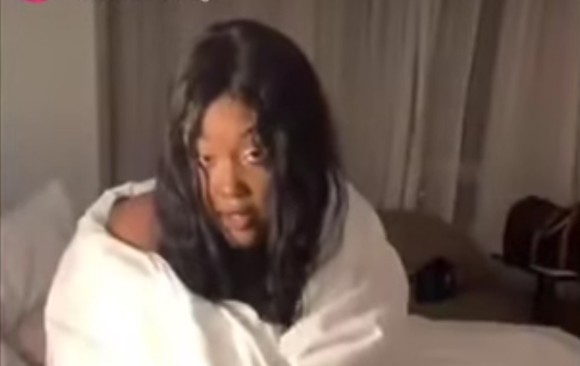 Screenshot via CupcakKe/Instagram Live
CupcakKe, the celebrated 22-year-old rapper who has delighted fans of all ages with her unique brand of over-the-top sexuality, claimed she is retiring from the business – just hours before she was scheduled to perform at the Social in Orlando.

The rapper had just played in Columbia, South Carolina, the fifth stop of her 23-city tour, called the $10K Tour because of a promotion to give away $10,000 in cash to fans. She made her emotional Sunday night announcement on Instagram Live.
She cited seeing a 13-year-old girl dancing to one of her particularly vulgar tracks as the moment things changed.

"I don't want to do music no more," she says in the tearful video. "I just want out the music industry."

She explains in the video, wearing a bed sheet from her Orlando hotel room:

"I have all-age shows, meaning people come to the events that's all-ages. [Begins crying] Ten, eleven years old, whatever,  and I feel as though I'm corrupting them with my songs. And ... I don't want to do it no more."

... "Right now you can see I'm literally in Orlando and some people were saying like, is she going crazy or is she cracking up from all the tweets in the last few days, but real fans know I don't talk about no one, I just did it to bring awareness to this, that I am through, that you will no longer see me nowhere."


"So the tour is off," she concludes. She also says she is removing her music from all streaming platforms.

Born Elizabeth Eden Harris in Chicago in 1997, CupcakKe had become an Orlando favorite, playing Pride Weekend last October, after making Orlando her only Florida stop on her 2018 Eden Tour. An MTV profile includes her penchant for writing Christian poetry as a teenager, "until she was convinced to apply her talents to rap."

In the video she also opens up about her gambling addiction, something she had not previously disclosed.

"It's been bothering me for a long time now ... in September of last year, I lost seven hundred thousand in the casino," she says in the video, between long pauses. "I learned during the time that I lost all of the money that I am very much at peace without it," she says. "Some people may say that this sounds crazy, but when I had this money all I had were people that used me, didn't care for me. So when I lost the seven hundred thousand ... I learned who my friends were and aren't."

Worryingly, she began her Sunday night video with the phrase, "So this Live is going to be the last video that y’all will see of me," especially as she has previously been hospitalized for depression after posting a suicidal tweet.
Following that tweet in January, she later posted, "I’ve been fighting with depression for the longest ..sorry that I did it public last night but I’m ok. I went to the hospital & im finally getting the help that I need to get through , be happy , & deliver great music . thanks for all the prayers but please don’t worry bout me."

Whatever path CupcakKe takes next, her openness and humor ensure many fans will be waiting to cheer on her next move – or perhaps accept her retirement.

When you need it, the National Suicide Prevention Lifeline can be a lifesaver. Free and available 24 hours every day, the number is 800-273-8255.