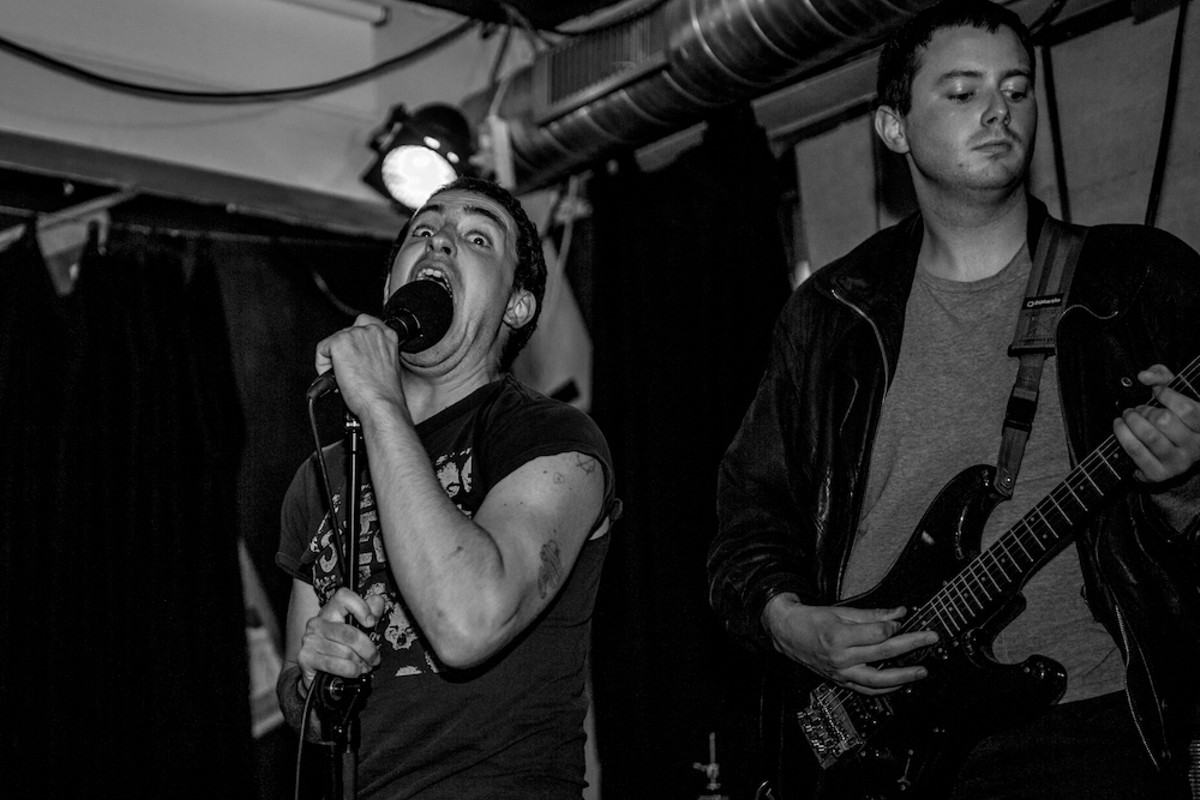 Urochromes – of Western Massachusetts and nowhere else, they'd like to make it known – are the duo of Jackie Boy and Dick Riddick. Fake names are more fun than real ones – and Urochromes, above all else, are meant to be fun.

"The band isn't always supposed to be funny, but 99 percent it is intended to be fun," Jackie, vocalist and frontman, tells Orlando Weekly over email. It's hard to read his tone, which we think (hope) is part of the bit.

If you wanted to, you could trace a red thread right through to Urochromes' place in "Punk as It Stands Today" – you could look at where they come from, ask the fanzine-inevitable "How did you get into punk?" query. But in the case of a band like Urochromes – does backstory even matter? Who cares?

Urochromes are as performative as it gets. It's all right there in front of you: Jackie, hidden behind cool-guy sunglasses, favors a promptly-soaked-through white turtleneck when he performs. They've made two music videos (music videos!), one of which takes place on the tiny private plane of a man Jackie refuses to name but calls a "local legend." There's loads of spit and blood, and there's also a truly weird fascination with the Gilbert Gottfried parrot character from Aladdin.

All of this from a relatively – dare we say – underground punk band with just two EPs and a live recording to their name.

It's an elaborately constructed image, one that's as much built on the foundations of persona-driven stand-up comedy (Jackie cites Sam Kinison and Andrew Dice Clay as inspirations) as it is on any sort of punk tradition. But this isn't at all to say that the music comes second. There are fewer than 15 recorded – and released – Urochromes songs, and each one is excellent.

You could call it bizarro punk – that's one that seems to pop up a lot. The internet likes the term "trash rock," whatever that means. What's apparent is this: It's guitar music, and it's icky-sticky-bodily-fluid gross. It's the aural equivalent of Trash Humpers, or maybe a John Waters flick. What else would you expect from a band named after the pigment responsible for the color of urine?

Riddick can shred, and Jackie Boy can sing (or shout, or sort of ... menacingly whisper). It's almost always about people who hate themselves – the people who populate Planet Urochromes are hung up on girls; they worry endlessly (Am I a bad fuck? Do I have a funny face?).

The third consistent member of the band is a drum machine, and they play with its constraints – dipping into proto-punk and industrial when they want to. If anything's apparent, it's that they love the Screamers.

Urochromes come from an American late-2010s punk scene that can seem frustratingly limited: in scope, in content, in accessibility. Somehow, Urochromes' reputation – of raucous live shows, of willingness to push boundaries – has shoved the band out from under the woodwork of the potentially stifling internet punk K-hole, and into the (also potentially stifling) spotlight of recent recognition from Major Music Media.

Unprecedented, and maybe uncomfortable? Definitely. But Jackie's grateful, he says, "for anyone that takes the time to get something I make out to more ears."

And if anything encourages more people to show up, ready to sing out the words "pissing in a bottle in my room" – we are here for it.