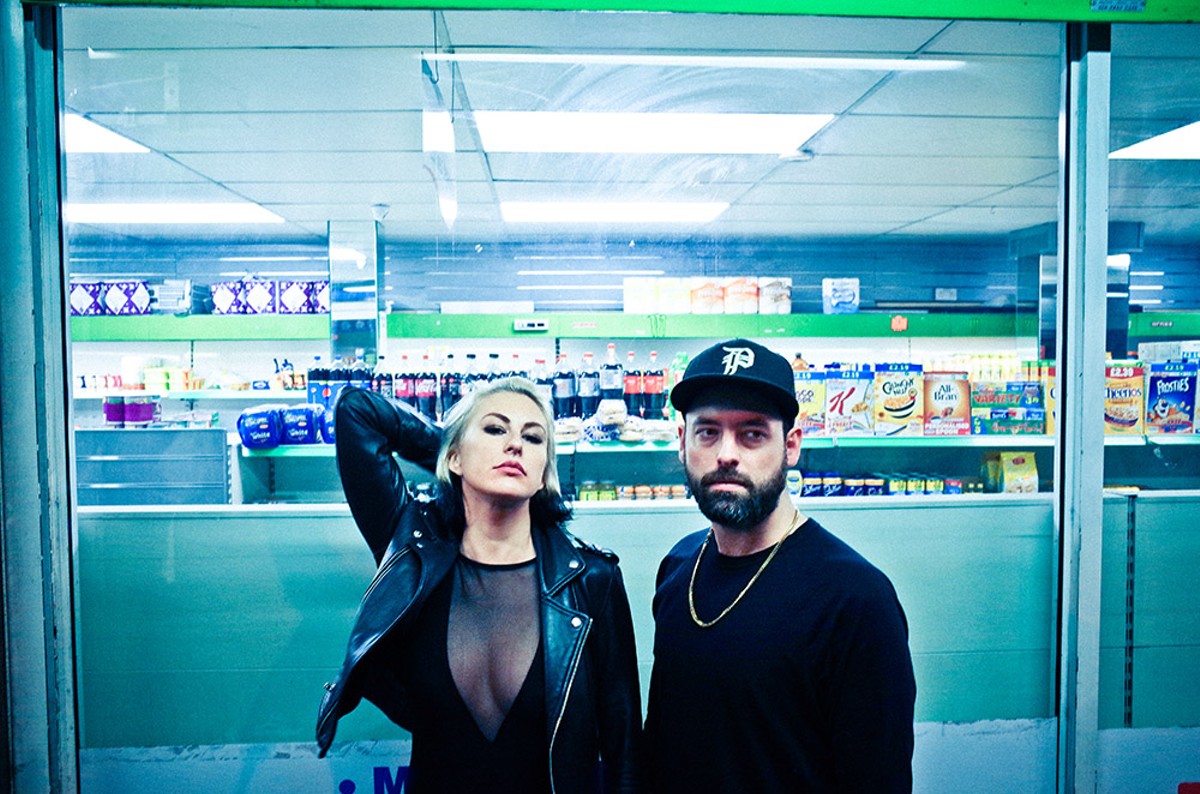 "Darkadelic" is as it seems: a portmanteau of "dark" and "psychedelic" used as a descriptor by Sarah Barthel and Josh Carter of Phantogram to sum up the tone and mood of their third album Three out now via Republic Records.

"'Darkadelic' is psychedelic in a darker way. ... Our lyrics can get pretty dark, but very real, and tie that to the darkness of the beats we make [and] darkadelic sounds right," offers Barthel.

Produced by Carter and Ricky Reed (CeeLo Green, Kesha, Bomba Estéreo), Barthel and Carter have referred to their previous purist attitudes regarding the privacy of their music during the creating and recording process as snobby; only more recently did they collaborate with others, when they recorded with Big Boi (Outkast) for their collaborative Big Grams release, before getting The-Dream and Tricky Stewart in the studio for feedback on the music they were writing for Three. "It was a completely different way of working – we grew up doing it [writing and recording] and taught ourselves everything. It's also really incredible to collaborate with other artists because you never know what is going to happen, and you put two different brains on a song or idea, and it can turn out to be so much cooler than you would ever be able to make it," muses Barthel.

Phantogram have toured extensively since before the release of Eyelid Movies in 2010. Barthel describes the experience thus: "A pretty fucking whirlwind of a life. There's a lot going on and it's not easy, and it's also extremely exciting and intense at the same time." As they toured Eyelid Movies, they realized their desire for their next record to sound more "boombastic" than the last: "When we write a song we have a very visual connection to something like a little scenario, or an emotion, or a scene from a movie, or whatever makes you feel."

Barthel and Carter also dealt with the dark reality of Barthel's sister's suicide during the writing and recording of Three. "It affected the creative process for a while. I was pretty fucked up after the fact. Josh and I both were. I had to go deal with things for awhile," Barthel remembers. Once again resilience prevailed: "It's a hard thing to understand and accept suicide in general. I wanted to get back in the studio and try to write. It was really really hard at first. You think you'd just spill your guts and everything is OK. Honestly, I went back in after two weeks and tried to work and focus, and there were some really great things that happened, and days I couldn't even focus and Josh took the rails, or Ricky Reed. They were all so helpful."

Writing and recording wasn't the last challenge for the musician. Afterward, Barthel figured that all of her "emotions and all of the heartache and toughness that it was to make the record" was behind her. But the reality was different: "I didn't even realize that performing these songs would be 10 times harder than writing them. We went on tour for a while and I could barely compose myself up on stage to get through some of these songs ... but it's very cathartic."

It should come as no surprise that Barthel and Carter are best friends. They've known each other since preschool, and each was involved in music separately before working together on songs. Carter, as her best friend and musical partner, taught Barthel how to produce her own music, write, play the guitar "and just be more creative." She describes her opportunity to work with her best friend as "fucking incredible." "We get to enjoy this whirlwind of a life and we have fun together doing it. We know each other so well, we love the same types of music, and we have the same kinds of ideas for what Phantogram will be, and we can't wait to start writing for the next record."