Band of the Week: Travis Adams 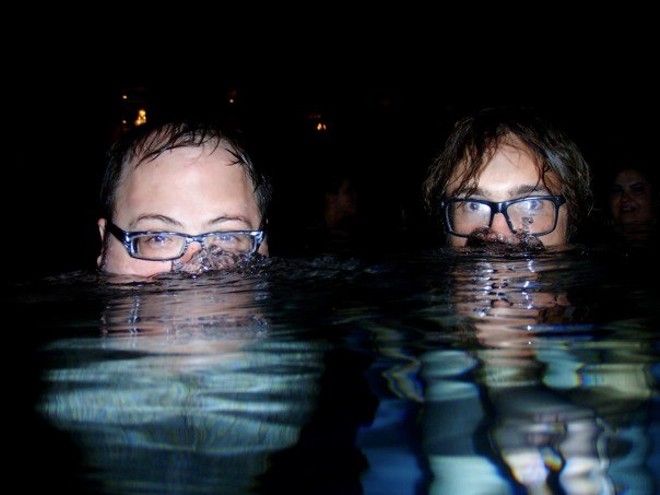 Inkwell (Travis Adams, left, and Davey Pierce)
This week, we're presenting a special – and somewhat sad – edition of Band of the Week. Longtime Orlando musician Travis Adams is departing the city next week for Seattle, leaving behind a legacy of bands like My Hotel Year, Inkwell and Field Kit that have been a cornerstone of this city's sound. He'll play a farewell show at Will's Pub on Thursday, Dec. 22, performing songs from all three bands' releases. Before he heads west, we wanted to ask him a few questions.

What was your first Orlando band? When did it start?
I technically started My Hotel Year in Atlanta in 2000. I wrote and recorded the record in Atlanta with the goal of moving to Orlando by the summer of that same year. I released the first MHY record in Orlando and I absolutely consider it an Orlando band.

Which Orlando bands have you played with, either as a primary member, or as a contributor?
My Hotel Year, Inkwell and Field Kit. I recorded and produced records for several Orlando area bands as well: Band Marino and Country Slashers, for example.

What are your currently available releases?
Unfortunately, due to a record label shelving our first release, the first My Hotel Year record is not available anywhere. I look to change that. Other than that release, all records can be found digitally on whatever digital music service you choose to use.

MHY:
The Composition of Ending and Phrasing (out of print)
The Curse

Field Kit:
I Have Sent You a Deadly Animal
I Am Error


What has been your most memorable show, either in Orlando or outside Orlando?
Wow. Too many to choose from. One that sticks out to me was one of Inkwell's first performances. It was for the Florida Music Festival and there was a huge buzz around the band. Tons of industry folks were in attendance and we sold the night out. Davey (my partner in Inkwell) and I decided to see how drunk we could get before we played. It was a sloppy mess but it was so funny!! It was our "fuck you" to the music industry. And they heard us loud and clear. Haha. In hindsight it probably wasn't the best decision. But it was hilarious.

Which local band has been your favorite one to play a show with? Why?
Back in the day we used to play with Unsung Zeros and Agent Felix. We really had no business playing together as our styles were in different worlds, but it worked. We were fans of each other as people and wanted our fans to like them and vice versa. We had some really great shows with those guys.

What description gets used for your music that you would most like to correct people on? Why?
I've noticed people don't try to describe music much anymore. There are too many gray areas to be able to define a group and it is all so subjective. It used to be you were able to define an act by its clear influences. People now have access to any kind of music, at any time, in the palm of their hands. Bands now are influenced by everything. Emo is the easy choice, but it's true. I write catchy sad songs. I hate the word "emo." Can I coin the term "post-pop?"

What’s your favorite thing about being an Orlando musician? What’s your least favorite? Why?
My favorite thing has always been the people. If I'm being honest, the MHY material was not well-written. We just hit Orlando right at that perfect moment. The band was immediately embraced. Shows were less about the music and more about a city getting together to sing at the top of their lungs. I am very proud to be part of that vehicle.

I do not like how the city has stopped supporting their local artists. I remember countless shows where we were put as an opening act for a large national act. The thought process was, expose your local artists to larger crowds to build the drawing power of the local act. We would support the clubs in slower times and they would support us by expanding our footprint. You don't see that anymore. I also don't see a unified "scene" anymore. What do I know, I'm an old man now.

There are some great local bands out there that need more attention: The Pauses, Expert Timing, Dikembe, Overdale/Summer Spiders, Elevators, Teen Agers and Fictions, just to name a few.

What's next?
I have my ninth record written. I believe it is another Inkwell record (still in debate) but I think I will give No. 9 to Seattle.