Band of the Week: A Place Beyond Giants 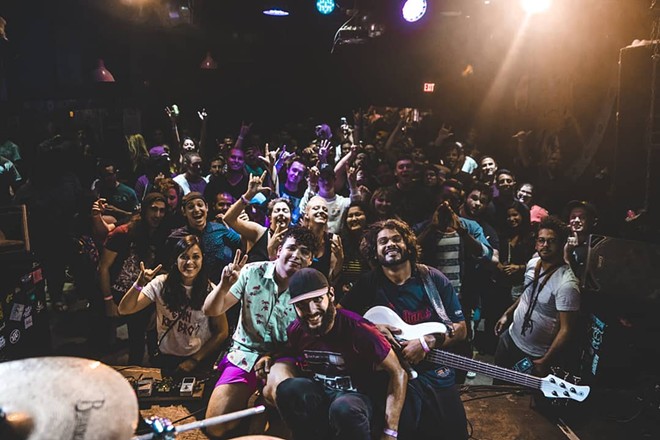 Welcome to Orlando Weekly's "Band of the Week." Every week, we highlight one of our favorite local bands. This week, we're pleased to bring you A Place Beyond Giants.

A Place Beyond Giants is playing their album release show on Aug. 10 at Henao Contemporary Center.

When did the band form?
The band or originally got formed in 2014 by a different lineup in Puerto Rico. Later in September 2017, Orlando Muniz and Steven Rodriguez (original guitarist from 2014) decided to pick up the name where it left off. The bass player was later added.


"A Hemisphere Built by Mr. DeLang"

What has been your most memorable show so far?
We have to say our most recent one at Will’s Pub with Strawberry Girls, Night Verses and Andres. The energy from the crowd was intense. At the end of the show we felt like the crowd treated us like one of the touring bands.

Which local band is your favorite one to play a show with?
Sweet Cambodia and Raising Cadence We all played together at Will’s. The flow of the show was like a tour package. We all became really good friends after that night.

What description gets used for your band that you would most
like to correct people on? Why?
We have been classified as instrumental Math-rock in the beginning but it's become more than that now. We began to add elements of our Caribbean roots and aim to experiment more on our upcoming songs.

What’s your favorite thing about being an Orlando band? What's your least favorite? Why?
Our drummers name is Orlando so we can say we owe it all to Orlando Haha. We also love all the touring bands that come through this area.

[Our least favorite is] the limited number of quality venues in the area.

Any big news to share?
Follow us on spotify to stream our full self titled album Aug 10th! Message us on facebook to pre order tickets for our shows. Support local bands buying show tickets thru them. Much love!