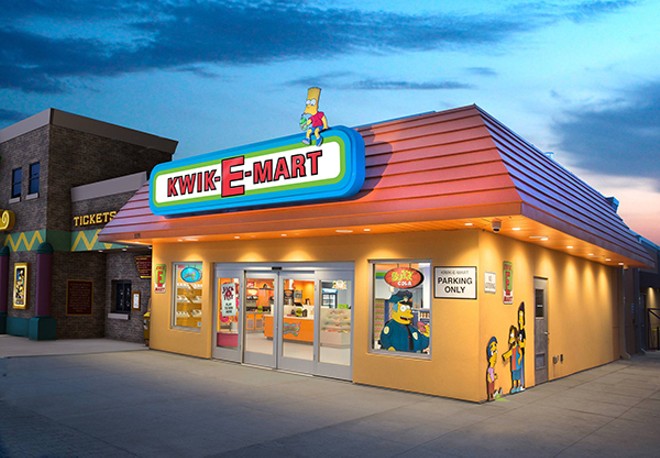 Image via SimEx-Iwerks
The Simpsons are one of the biggest draws at Universal Studios theme parks, but a new attraction in Myrtle Beach might create some surprising competition for Universal.

When “The Simpsons in 4D” opens at Broadway at the Beach, guests will be able to explore the famous Kwik-E-Mart, experience a 4D movie, and take Hollywood premiere-style souvenir photos.

This is just the latest attraction for the ever-growing Broadway at the Beach entertainment district, which is also home to , a WonderWorks, a King Tut museum, a minor league baseball team, a water park and many other attractions.

Both the Kwik-E-Mart and the Aztec Theater have been meticulously re-created as part of the new attraction. The Aztec Theater facade is filled with authentic-looking neon and movie posters. Entering through the lobby, guests encounter a red carpet photo opportunity before the SimEx-Iwerks Entertainment 4D film that was custom made for the attraction.

Unlike the Simpsons attraction in Orlando, which used the former Back to the Future attraction building and much of the same technology, the new attraction in Myrtle Beach is custom-designed from the ground up.

"We are thrilled to bring The Simpsons to Myrtle Beach in a way that this incredible brand deserves," says Michael Needham, founder CEO of SimEx-Iwerks Entertainment. "Launching this experience will be the culmination of years of passionate effort to bring The Simpsons to life beyond the screen. We are creating a series of memorable moments enriched with tremendous detail throughout the attraction so that guests feel they are part of The Simpsons universe."

Image via Mr Myrtle | Youtube
The Aztec Theater still under construction at the new Simpsons in 4D attraction in Myrtle Beach
Details on what characters aside from of the five Simpson family members are to be featured in the attraction have yet to be confirmed, but numerous characters can be seen on the building in a similar fashion to those found around Springfield at Universal Studios.

The same level of detail as the Orlando and Hollywood Simpsons lands is found at the Myrtle Beach attraction, but here the buildings are set apart, so guests can walk all around them. A large building seen behind the Kwik-E-Mart advertises Lard Lad doughnuts.

Also, like Universal’s Simpsons land, the new attraction in Myrtle Beach will have a life-size Kwik-E-Mart where guests can purchase all kinds of Simpsons-themed merchandise, including Buzz Cola, Heat-Lamp Hot Dogs and Lard Lad doughnuts.

One item that seems to be missing from the lineup of items is Duff Beer. At Universal Orlando, Duff Beer is locally made and sold at both a brewery-themed bar overlooking the park’s lagoon and a life-size Moe’s Tavern.

Neither of those are planned for the Myrtle Beach attraction, but the Broadway at the Beach Kwik-E-Mart is more accurate to the one seen in the television series than either of the Universal versions.

This will also be the first time the Aztec Theater has been thoroughly and accurately realized, with guests able to explore both the outside and inside of the theater.

The Kwik-E-Mart opens this weekend, and the 4D theater opens later this year. Tickets for the 4D attraction have yet to go on sale.