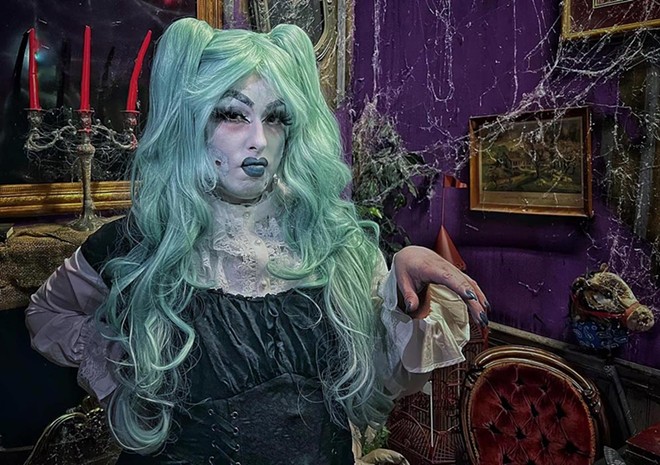 Central Florida’s performing arts opportunities include plenty of paid productions inside and around the theme parks, plus a wide range of semi-professional shows at both private and publicly owned venues. But if there’s one thing Orlando could use more of now — nearly eight years after the loss of Theatre Downtown — it’s community theaters, which offer many promising young artists without privilege their first chance to shine. That’s why last week I happily hazarded tourist traffic to visit an I-Drive Holiday Inn Express: so I could watch Little Radical Theatrics (littleradicaltheatricsinc.com) producer Fatima Viegas and director-designer Travis Eaton putting the cast of The Addams Family through their paces ahead of the musical’s July 29 opening, and aim a spotlight at this rapidly growing all-ages nonprofit as it puts forth its fourth show in just over a year.

Founded more than a dozen years ago in Westchester, New York, Little Radical Theatrics successfully mounted 27 full-scale musicals just outside Manhattan, before the COVID-19 pandemic prodded Viegas and her family to permanently move into their pre-existing Orlando-area vacation home.

“We found how much we really loved Central Florida,” recalls Viegas. “I started to reach out to other arts organizations and see what was around, and I found that everyone was so welcoming. … Even though the pandemic was hard for everyone, we really felt so at home here.”

After presenting Urinetown, Into the Woods and The Sound of Music here — all since last February — Viegas observes that Orlando’s talent community is similar to the one she left behind, in the sense that both locations “have a big mix between older people who do it because they love it [and] young professionals who are trying to get their start,” whether on Broadway or at Disney.

As a 501(c)3 community theater, Viegas emphasizes, “We do not want to be a professional theater; this is about the community. It’s about bringing people of all ages, all genders, all ethnicities together, and working together to create a show.”

To that end, incorporating children into every cast is something Viegas says she’s “very, very big on, because we see how everyone learns from each other … adults learn from the kids, and the kids definitely learn from the adults.” And as the company’s name — which was coined by Viegas’ daughter and her friend — implies, Little Radical isn’t afraid of shaking up the traditional casting status quo when it comes to gender, color or body shape. “We always believe in opening opportunities to everyone,” Viegas says, promising their shows “will never be the same as every other production; we will always put our own twist on it.”

That attitude was on full display during the run-through of Act One I watched, because although Andrew Lippa’s Tony-nominated songs and the book by Marshall Brickman and Rick Elice remain the same, this certainly isn’t your father’s Addams Family.

Wednesday Addams (Alyssa Dowling, a dynamite vocalist) is still the gloomy proto-goth daughter of Gomez and Morticia (Noah Clark, Giovanna Ciccone), pestered by her masochistic little brother Pugsley (Macallister Caracciolo). But in this interpretation of the creepy kooky clan, Lurch (Ryan Bassett) wears heels and a French maid’s outfit instead of the traditional butler’s uniform, and Grandma Addams (Yinelly Arnold) is a bruja dropping witchy wisdom en español, among other tweaks.

All those unconventional choices emerged from the actors themselves, according to Eaton. He’s a veteran of Universal Orlando and Central Florida Vocal Arts and is directing his first show for Little Radicals after previously performing with them and doing technical designs.

“I allow them the space in the room to play with that,” Eaton says, beginning with improvisations during auditions, freeing his actors to “flavor” the script with their culture: “Where is it in this script that you can find those beats and those moments to make this more yours?” That expansive approach appears ideal for The Addams Family, which, as Eaton points out, has always been about “blended families.”

After Addams Family, Little Radical’s upcoming season will continue with four more musicals. For now, they’re renting stage space at Orlando’s Lowndes Shakespeare Center, but in the future Viegas dreams of having their own space where they can present classes or “maybe do more huge shows.”

But for now, as a small company, their focus is on their education-forward mission of “diversity, inclusion and making sure that anyone can play anything,” says Viegas. “We don’t want people to be limited by what they think something looks like, and we don’t want our audiences to be limited [by] what this is supposed to look like or be. That’s not going to be us; that will never be us.”