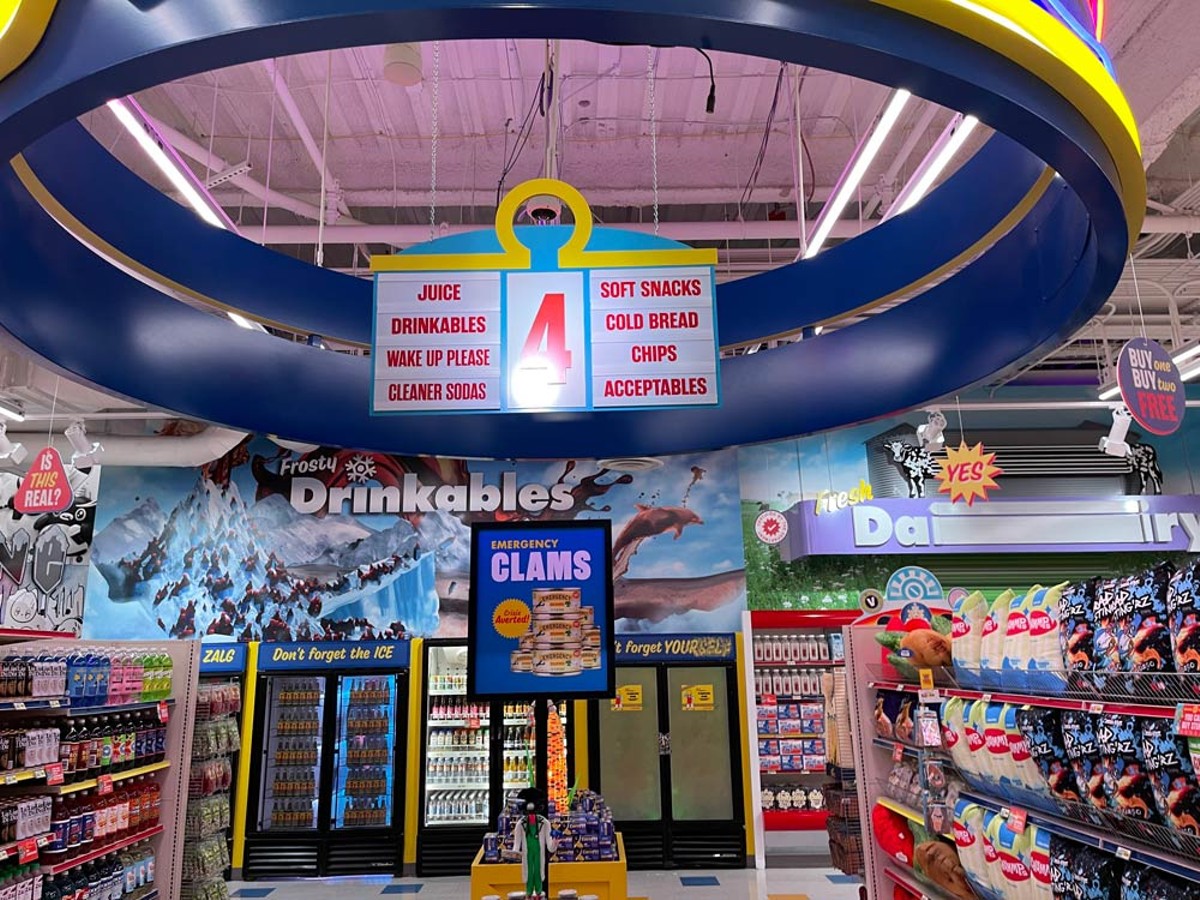 Running low on Emergency Clams? Pick some up at Omega Mart photo by Seth Kubersky

The tourism industries of Las Vegas and Orlando have long been intertwined, with attractions at one destination frequently influencing or inspiring those in the other, from the Hilton's much-missed Star Trek Experience (the spiritual ancestor of Star Wars: Rise of the Resistance) to the Strip's fantastic new Flyover flight simulator by the creator of Disney's Soarin'. So when I heard real estate developer and Burning Man devotee Winston Fisher was building his second Area15 entertainment complex on 17 acres alongside I-4, I knew I had to pay pilgrimage to the original location during my first post-pandemic visit to Sin City earlier this month. Area15 was by far the highlight of my recent nine-day trip to Vegas, but celebrating the 2024 arrival of its Central Florida sibling, I have to sound a warning: This anticipated project could come to town without its star attraction.

Located alongside the I-15 freeway from which it takes its name, Las Vegas' Area15 is a curated collection of immersive interactive experiences that blur the line between theme park and art gallery.

Housed inside a series of massive warehouses with "Does Not Exist" emblazoned on the roof (a cheeky nod to the mysterious mythology of Area 51), the complex is surrounded by a sculpture garden housing massive metal mementos of past Burning Man festivals, including a full-sized retired airplane and Tyler Fuqua's Iron Giant-esque android Mechan 9; his brother Mechan 11 is already standing watch on the Orlando site. Once inside the main exhibit hall, visitors are free to explore the shops and eateries before entering one of the independent, separately ticketed attractions.

The headliner at Vegas' Area15 — occupying 52,000 of the main building's 200,000 square feet — is Omega Mart, the second permanent installation by New Mexican art collective Meow Wolf, whose House of Eternal Return in Santa Fe was famously funded by George R.R. Martin. Imagine if a walk-through funhouse (without cheap jump-scares) was merged with an escape room (minus the pressure of a ticking clock) then dosed with satirical anti-corporate surrealism, and you'll have an inkling of what's in store for explorers of this one-of-a-kind attraction.

Soon, you'll stumble across a hidden portal inside the janitor's closet or the soda freezer leading to the Factory where Omega Mart's absurd inventory is manufactured, or to Seven Monolith Village, source of the interdimensional alien element that is Dramcorp's secret ingredient. Each of OmegaMart's environments is designed by a different artist, but they all share an interconnected storyline and complementary aesthetics. You might be searching the bedroom of a missing teenager for clues to her disappearance one moment, then scaling a rocky wall inside a candy-colored cavern the next, only to emerge into a dazzling forest fashioned from recycled chicken wire.

Omega Mart is the type of experience that gives back as much as you invest in it: While I felt I'd only scratched the surface after over three hours inside, one of my colleagues was satisfied after an hour, and another exited after 20 minutes. While you can approach it passively, digging into all the mutilayered details is both satisfying and exhausting; to follow the two-hour plot into Dramcorp's back offices and relive your adventure at home, invest in the $3 employee ID card used for "booping" the numerous interactive touchscreens.

Thus far, Meow Wolf's name has been conspicuously absent from the official information released about Orlando's Area15. In fact, the only confirmed tenants — Liftoff, a constrained five-minute outdoor balloon ride; and Haley's Comet, a minute-long indoor zipline — were two of Vegas' least impressive attractions and didn't operate often enough to even add kinetic interest. If Meow Wolf isn't coming here, it's hard to imagine another anchor that would be as exciting. But either way, Meow Wolf's installation represents less than half of what Area15 has to offer. No matter what happens with Meow Wolf, here are five other things at Nevada's Area15 they absolutely must import to Florida:

Lost Spirits: A richly themed distillery where you sip strong straight rum in fog-shrouded alleyways haunted by sideshow performers. Worth the $50 admission for the entertainment alone, even if you aren't downing all five included shots.

Illuminarium: Dozens of 4K projectors, aided by floor-shaking speakers and scents, transform a 7,500-square-foot room into a garden of Georgia O'Keeffe's flowers or the African savanna; this delivers what the reviled traveling Van Gogh exhibit at the Orange County Convention Center promised.

Free parking: Casinos in Vegas are increasingly charging for parking garages that used to be free, but Area15 bucks the trend with ample free lots. Orlando ought to offer the same if it wants to attract locals.

Local discounts: Speaking of which, Omega Mart and other tenants give attractive discounts to Nevada residents. Hopefully Orlando's Area15 will do the same for Floridians, or (better yet) offer annual passes, because I'll be first in line.

Things to do in Orlando, May 11-17: John Mulaney, Wanda Sykes, Impact Wrestling, Gatorpalooza and more

Your horoscope, May 11-17: ‘The winner will be the one who knows how to pick the right fights’

Ahead of Citrus Brawl in Kissimmee, Impact Wrestling debuts Pride-themed shirt and partnership with CFSL

Ahead of Citrus Brawl in Kissimmee, Impact Wrestling debuts Pride-themed shirt and partnership with CFSL

Things to do in Orlando, May 11-17: John Mulaney, Wanda Sykes, Impact Wrestling, Gatorpalooza and more

Your horoscope, May 11-17: ‘The winner will be the one who knows how to pick the right fights’