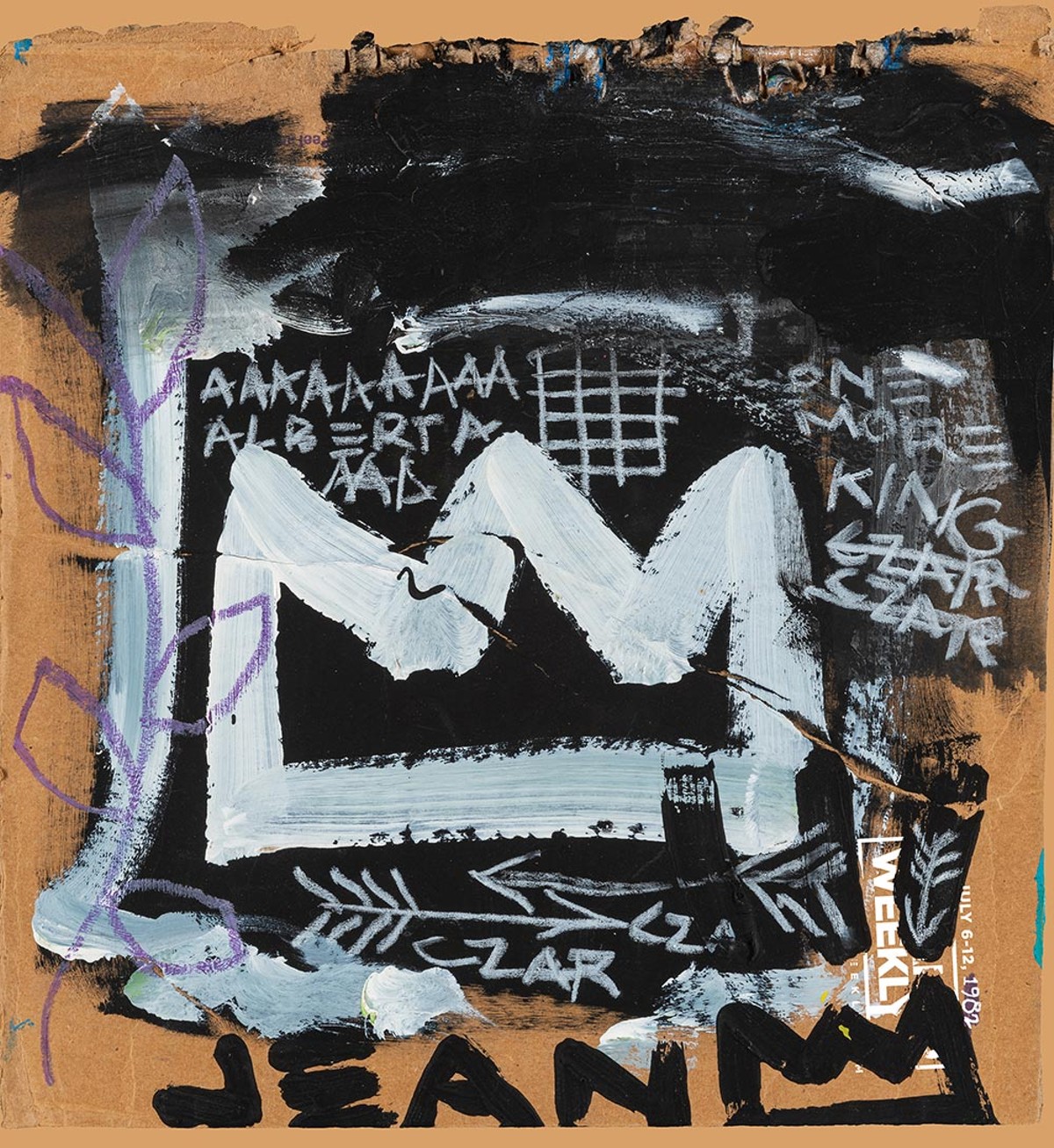 "Shut up. You took the money. Stop being holier than thou."

Was this amateur tough-guy exchange between Dr. Aaron De Groft and Dr. Jordana Moore Saggese — from a bombshell FBI affidavit released last week — the moment the other shoe dropped for the now-former Orlando Museum of Art director De Groft? Possibly. It's definitely a torrential downpour of other shoes falling from the sky — each with a commemorative Basquiat sock stuffed inside — right over OMA and De Groft.

Dogged by questions of provenance from day one of the exhibit, the troubled saga of the Heroes & Monsters exhibition reached zugzwang over the last two weeks. And even a skilled television writer — like, say, Thaddeus Mumford Jr., but more on him in a moment — couldn't have written a more bizarre series of twists and turns, resulting in an FBI raid on the museum and De Groft being kicked to the curb by OMA's board in short order.

The last act of this saga started on June 24 when the FBI raided the museum bright and early Friday morning, days before the exhibition was set to close and the exhibition pieces to head off to Italy. (The subgenre of "paintings as flight risk" is a conceptual art movement we weren't ready for.) The FBI team bundled off all of the Heroes paintings — more than two dozen — though no arrests were made.

The news of the raid got somewhat, rightfully, overlooked as the national news of the Supreme Court overturning Roe v. Wade dominated the headlines, but there was no missing what would come next.

Last Tuesday, mere days after the raid, the New York Times released excerpts from the aforementioned FBI affidavit, included in the search warrant that allowed the feds to raid the museum and seize the 25 paintings on Friday. The revelations were damning, to say the least.

Saggese told FBI investigators how she was dismissed and told off by De Groft after casting doubt on the paintings' origin. Saggese — a professor at the University of Maryland, and a noted Basquiat expert — was originally called in by OMA to help authenticate the paintings. Named as Expert 2 in the FBI affidavit supporting the FBI's search warrant of the museum, Saggese said she was pressured to keep quiet by De Groft.

"You want us to put out there you got $60 grand to write this? Ok then. Shut up. You took the money. Stop being holier than thou," De Groft reportedly wrote in an email after Saggese asked for her name to be removed from the exhibit. "Do your academic thing and stay in your limited lane."

Saggese alleged that an interview about the paintings that the museum touted was in fact entirely fabricated and never took place. Her attorneys added in a statement to Orlando Weekly that she never agreed unequivocally that the paintings were genuine.

The affidavit contained more eye-popping revelations. According to the document, Thaddeus Mumford Jr. — the impeccably credentialed television writer untruthfully alleged by the paintings' owners to have bought the works from Basquiat for $5,000 in 1982 and then socked them away in a storage unit — told federal agents in 2014 that he had neither met Basquiat nor purchased any of his paintings. He signed a sworn statement in 2017 to that effect. Mumford added that he was pressured by the paintings' owners to corroborate the story, in exchange for 10 percent of the sale price.

In other words, the FBI knew before the exhibit ever opened at OMA that the narrative set forth by the museum's exhibition materials was a fairy tale, and were more than fairly certain that the paintings were just as fake as the story.

That Tuesday edition of the NYT was still on stands when De Groft was summarily dismissed by OMA's Board of Trustees. The board shared the news at 11 p.m., saying that they were concerned about the exhibit as well as the way De Groft handled himself while representing the museum.

"[The Board] is extremely concerned about several issues with regard to the 'Heroes and Monsters' exhibition, including the recent revelation of an inappropriate e-mail correspondence sent to academia concerning the authentication of some of the artwork in the exhibition," they wrote. "We have launched an official process to address these matters, as they are inconsistent with the values of this institution, our business standards, and our standards of conduct."

For those following the story since February when the exhibit opened, the news is long overdue.

The provenance of those paintings has been called into question repeatedly from different angles. The owners of the paintings have a history of shady dealings in the art world and beyond. Mumford, who is said to have purchased the paintings directly from Basquiat, told federal agents he never met the late painter. A brand mark under the paint on the cardboard pieces and another on the back of one seems to suggest they weren't made at the time that the exhibition claims. The Los Angeles art dealer who was providing Basquiat a living space at the time the paintings were allegedly made said he found the whole story unlikely — as did a close associate of the artist interviewed by Orlando Weekly.

OMA's Board of Trustees has appointed Joann Walfish, who has served as the museum's chief financial officer, to serve as interim director of the museum while they seek out new leadership. 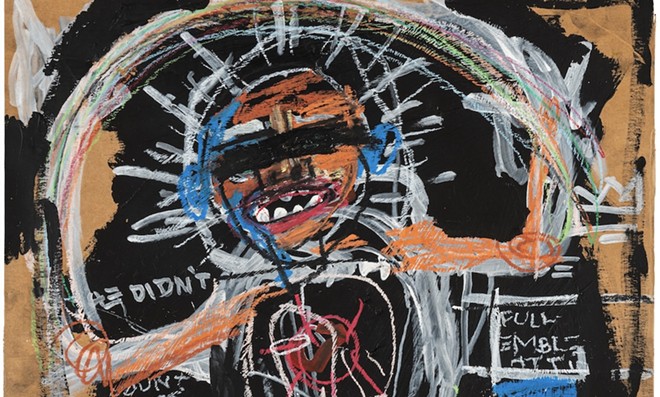 image via Orlando Museum of Art
"He didn't."

The museum has a long road ahead of them in restoring the public's trust in the institution. Response in the community at large was disappointed and dismayed.

"Displaying fake art is not only deceitful and connected to larger crimes, but it gives legitimacy to those who wish to profit off another person's legacy, and in this case an artist of color too," said State Rep. Anna Eskamani, D-Orlando. "I also am pleased to see that Aaron De Groft is no longer Director and CEO of Orlando Museum of Art — it's clear that he ignored warning signs from others concerning the authenticity of this art, and accountability matters."

Director of Orange County Arts & Cultural Affairs Terry Olson reflected on the hype and bombast behind the exhibition: "P.T. Barnum said that all publicity is good publicity. I'm not sure I'd 100% agree with that for the arts, that have a more civic mission than just to make money, but bringing more people out to experience the art does further the mission," said Olson. "Being aggressive in bringing new experiences to Central Florida is certainly admirable as long as it is done with integrity."

In an open letter written on the day of the FBI raid to the chairwoman of the Orlando Museum of Art Board of Trustees, Cynthia Brumback, Orlando art supply dealer Sam Flax forcefully laid out the steps that he thought should be taken by the museum to regain some credibility in the eyes of the public at large — including the entirety of the Board resigning and an apology issued to the people of Orlando.

Elsewhere in the letter, Flax waxed philosophical on the fallout: "Museums experience scandals, just like any other institution, maybe even more than most. What sets the OMA apart is its foolishness in burying its head in the sand. The New York Times did not accuse nor imply that in being duped (at best) or being accomplices (at worst), we are yokels," wrote Flax. "This seems to be the elephant in the room that only locals see. In my opinion, the museum were not yokels in your stupidity to deal with criminals, but did act like yokels in deciding to do nothing to remedy the situation."

With additional reporting by Kyle Eagle.