Image via The Trek Collective
Red Sea Astrarium Star Trek attraction proposed for Jordan
After a five-year run, one of the first attractions to close at Universal Studios Florida, just six years after the park opened, was a Star Trek-themed video production attraction. More of an elaborate scheme to sell guests on $30 VHS recordings of themselves than an actual attraction, the Star Trek Adventure left a lasting impression on countless guests and many have dreamed of Star Trek returning to Universal Studios in the decades since the attraction’s closure.

Various rumors regarding Star Trek have filled message boards and fan blogs over the years, but last year multiple industry insiders began reporting that Universal was in late-stage talks to bring a new Star Trek attraction to the parks. With production already underway on the two new Star Trek movies and a second season of the Star Trek: Discovery series heading to CBS All Access, it’s not surprising that Viacom and CBS would be interested in cashing in on the popularity of Star Trek with a major theme park presence.

A Star Trek-themed coaster opened at a theme park in Germany last year, but very few of the other announced theme park attractions around the world have been realized. Now it looks like Viacom is done dealing with second-class developers and attractions, instead opting to release the theme parks rights to a world-class theme park operator, like NBCUniversal, that would ensure the attractions are built.

Alain Littaye, a French writer and Disney historian with extensive contacts throughout the industry, is reporting on his Disney and More blog that an inside source with knowledge of Universal’s future plans has confirmed to him that while a Star Trek show at the Universal Studios Florida park is still a possibility, the primary focus is now on the rumored fourth park where “a Star Trek Sci-Fi area is being highly considered to hit back [at] WDW DHS Star Wars land.”

Universal Orlando has been acquiring hundreds of acres of land south of Sand Lake Road and east of Universal Boulevard. With an agreement earlier this year, the company now has full rights to develop a theme park on that property. During the legal hearings leading up to the land use agreement, a representative for the Universal Orlando was quoted referencing the rumored new park saying that it was “obviously super, super secret commercial information.” Many viewed this as a tongue-in-cheek acknowledgment what some have called the worst-kept secret in Orlando tourism history.

It’s expected that the new park will open in 2022, just after Disney World’s massive 50th Anniversary in 2021. Previous rumors have pointed to the new park including a land based on Lord of the Rings, an extensive Super Nintendo World area, and a Fantasyland-like area filled with DreamWorks properties such as Shrek, How to Train Your Dragon and Kung-Fu Panda.

In his blog post detailing the Star Trek plans, Littaye goes on to explain that the new land would essentially play the role of Tomorrowland for the new park. Littaye quotes his unidentified inside source as claiming that "the days of random themed areas with 5 IPs around each other are gone and they are going to transition each area nicely.” This lines up with the previously reported rumors for the DreamWorks version of Fantasyland.

Instead of having attractions for various intellectual proprieties sitting side by side, the land would be filled with mini-lands for each of the franchises. A similar design can be found in the DreamWorks area at the MOTIONGATE Dubai theme park, which opened last year. Disney also used this concept, though to a much lesser degree, with the Fantasyland expansion at the Magic Kingdom. 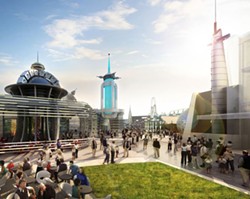 Image via The Trek Collective
The Star Trek themed land planned for the never built Paramount Park Spain.
Few details of what the new Star Trek land, if it does happen at all, will include but Littaye quotes his source saying the land itself will draw design inspiration from the Sci-Fi City area found in Universal Studios Singapore. That area, while somewhat similar to Islands of Adventure’s Marvel Super Hero Island, features a brutalist meets space style design with greys and whites dominating the land’s color scheme.

According to Littaye, the source goes on to point out Universal Studios Beijing will also have a similar designed area but instead based on Transformers. Renderings of that land feature a near carbon copy of The Incredible Hulk Coaster from Islands of Adventure but re-themed to Transformers. The design aesthetic of the new Star Trek land isn’t surprising; formerly planned but never realized Star Trek attractions in both Spain and Jordan featured a very similar look.

There’s no word on what or how many attractions the land will include but both Sci-Fi City at Universal Studios Singapore and the new Transformers land in the new Beijing park feature at least one indoor attraction and one outdoor one.

Image via The Goddard Group
The planned but never realized full scale Starship Enterprise in Las Vegas
The new land may also feature one of the most impressive centerpieces in Orlando; a full-size Starship Enterprise. In Vegas, where a standalone Star Trek attraction operated for a decade before shutting down in 2008, there were plans drawn up for a full-size Starship Enterprise to be constructed at an estimated cost of $200 million. While prices have gone up dramatically since then, some, including Littaye, have suggested that the cost of construction is surprisingly low considered the challenges such a building would entail. For Universal, those costs would be even less since the schematics have already been developed and could likely be purchased at a much lower rate than having to start from scratch.

The likelihood of a full-size Starship Enterprise being built in Orlando are still very slim, but these latest rumors are the closest we’ve been to the famed ship since at least 1996.

Luckily, if the 2022 opening date is correct, Universal Orlando would need to begin constructing the new park very soon. Shanghai Disneyland took nearly five years from groundbreaking to opening day while Universal Studios Singapore took almost three years to the day from groundbreaking to its grand opening though the entire park didn’t open for another year. Universal Studios Beijing is on a similar four-year construction timeline.

If the new Orlando park had a similarly aggressive construction timeline as Universal Studios Singapore did, and if the 2022 opening is correct, then the park would need to begin construction sometime next year. With the extensive approval process required for projects of this scale in Orange County it seems very likely that Universal Orlando would need to begin the public approval process before the end of this year, though at that time we may still not learn what intellectual properties the park will include, but a building shaped like a giant Starship Enterprise might give it away.