Disney has big plans for Tomorrowland beyond Tron. Here's everything we know right now 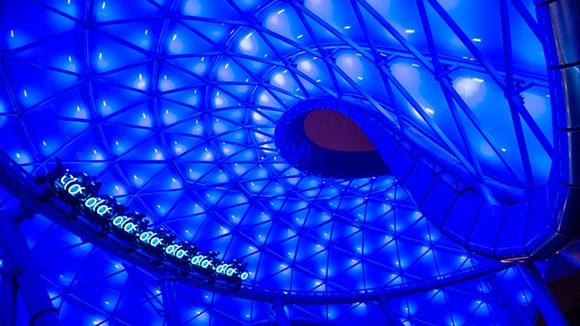 Image via Disney
A Tron coaster car in the outside portion of the ride under the roof strutcture at Shanghai Disneyland
As the new "TRON Lightcycle Run" motorbike roller coaster readies to open at the Magic Kingdom later this year (or early next year), the rest of Tomorrowland is in the midst of a multi-year update that may be far larger than most fans had previously realized.

Even before Tron was confirmed for the Magic Kingdom in 2017, there were strong rumors that Tomorrowland would be receiving a significant overhaul. Beyond closing Stitch's Great Escape soon after the announcement, however, there's been very little evidence that the rumored overhaul was moving forward.

Notable insider and former Orlando Weekly columnist Jim Hill began signaling in the middle of last year that he was hearing the overhaul was moving forward. Around the same time, Disney started to cleanse the land of its steampunk-meets-Buck Rogers aesthetic, added in 1994. Signage began shifting back to the mid-century, space-age style the area first opened with. That cleansing is ongoing with specific props that are unable to be easily removed instead painted to better blend in with the rest of the land. 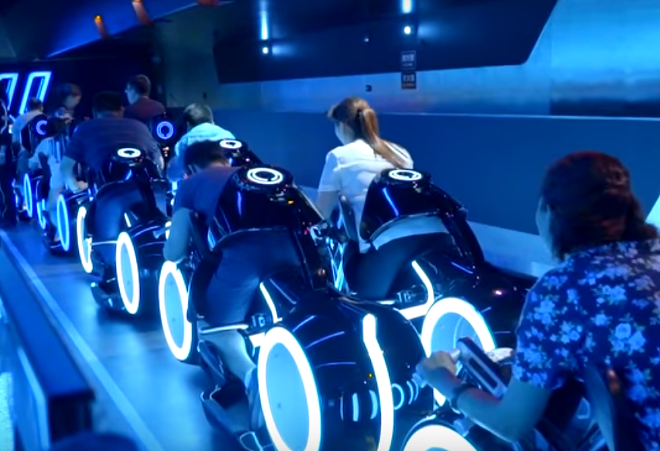 Image via SoCal Attractions 360/YouTube
Tron coaster at Shanghai Disneyland
It now looks like the most substantial changes in the land may happen after Tron's opening. According to Hill, the Monster’s Inc. Laugh Floor may close at the Magic Kingdom, with a possible replacement heading to Hollywood Studios. Laugh Floor currently requires higher-paid performers to operate it. With newer technology, it may be possible to replace it with an AI or video-based system that could lower the cost to run an attraction that no longer pulls in large crowds.

Beyond Laugh Floor, both the go-karts and Space Mountain are also rumored to be receiving updates. The Tomorrowland Speedway was thought to be undergoing a Tron redo that would include electric go-karts and special lighting. New temporary holiday decorations debuted this past holiday season that are surprisingly similar to the rumored Tron-inspired decorations. This may have been a test to see how the more permanent light decorations would look.

Next door at Space Mountain, the iconic coaster is expected to close for a multi-year refurbishment once Tron opens. The closure is rumored to begin sometime in late 2022 or early 2023, with it reopening mid-decade. Details on the refurb are still slim, but it's thought that it may include new ride vehicles with in-car audio, improved special effects, a new exit, and multiple safety improvements.

At Disneyland, their version of Space Mountain has seen multiple overlays to keep the attraction popular with locals. With Disney World expecting many to visit for their 50th-anniversary celebration in 2021 and 2022, the park may be giving certain rides similar temporary overlays to draw visitors back. While uncommon in Orlando, those overlays are a standard tool many other parks use to keep their rides fresh.

Image via Disney
A now slightly outdated piece of early concept art for the upcoming Tron attraction at Magic Kingdom
In recent months, the Carousel of Progress has seen maintenance issues, including one audio animatronic's hand falling off during the middle of a show. It's unclear if the Carousel will receive an update or become a completely new show.

Also unclear is if the rumored intellectual-property-driven re-imagining of the PeopleMover is moving forward. Some of the projects, like the replacements for Stitch and Laugh Floor, have yet to confirmed by Disney, but even as those projects await approval and announcements, it’s clear Tomorrowland will see plenty of new attention – well beyond the Tron coaster.