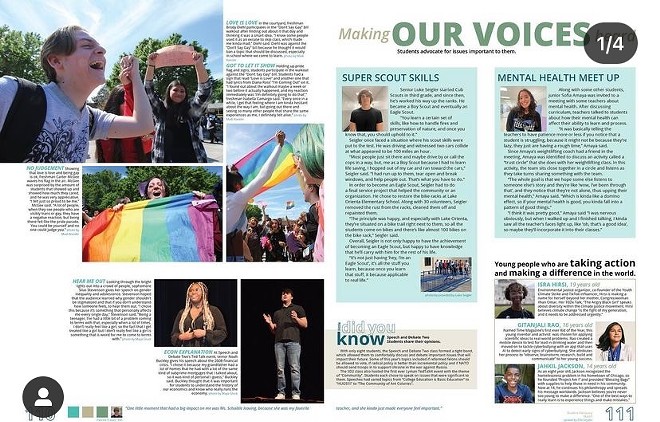 The “Don’t Say Gay” era has arrived in Central Florida schools with controversy over photos in the Lyman High School yearbook. The Longwood school has postponed release of the publication because of images of students protesting House Bill 1557, the Parental Rights in Education legislation that “prohibits classroom discussion about sexual orientation or gender identity in certain grade levels.” The bill goes into effect on July 1.

The photos in the Lyman yearbook show students holding rainbow flags and a sign that reads “Love Is Love” during a walkout earlier this year. Rather than reprint 600 yearbooks without the unsanctioned images — at an estimated cost of $45,000 — the school has opted to cover the photos with whiteout stickers. Hence the trending #StopTheStickers campaign spreading on social media that has caught the attention of local politicians, including state Reps. Carlos Guillermo Smith and Anna Eskamani, both D-Orlando.

“The whole goal of [HB 1557] is to silence the community and not let them have their voices,” Ella Snyder, co-editor-in-chief of the Lyman High School yearbook, told Orlando Weekly. “If we were to cover them up with stickers, that would basically be giving in to the bill and silencing them again.”

Snyder edited and provided copy and interviews for the page in question. She said Lyman was buzzing with talk of the decision on campus Tuesday, including a morning announcement from principal Michael Hunter.

In an email to Lyman families, Hunter announced the yearbook delay, saying the photos did not meet school board policy because they depicted a “non-school sponsored” event. Hunter also noted in the message that overall, “the yearbook celebrates Lyman’s history, diversity and inclusivity.”

Some students and staff smell hypocrisy. Snyder said yearbooks at Oviedo and Hagerty high schools also contain spreads with photos of walkouts over the “Don’t Say Gay” bill. However, those publications didn’t include prominently displayed rainbow flags like in the Lyman yearbook.

Michael Lawrence, communications officer for Seminole County Public Schools, wrote in an email to Orlando Weekly that he hadn’t seen other schools’ yearbooks and so couldn’t comment directly on them. But he said it’s possible the context and manner was different in those instances, making them compliant with school board policy. 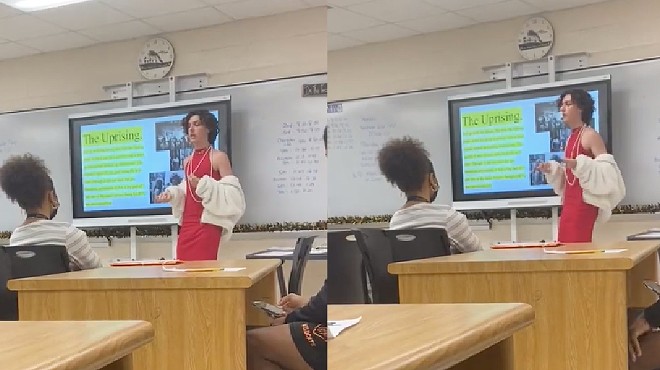 Madi Koesler is the 2021 Lyman graduate who took photos of the walkout for the yearbook. She’s been actively spreading the word about the high school’s decision to cover up the spread. Koesler believes it’s directly related to political controversy surrounding the “Don’t Say Gay” legislation.

“We do have an LGBTQ spread that’s been in the book for a few years now and they said that was OK,” Koesler told Orlando Weekly. “In that spread, I took pictures of the Come Out With Pride parade in downtown Orlando and those are there in the book and those are fine.”

Koesler said she attended a meeting of the Gay–Straight Alliance at Lyman on Monday and spoke to some of the kids that were in the photos.

“It was heartbreaking. They're just so upset because exactly what they were protesting is happening to them,” she said.

Danielle Pomeranz, yearbook advisor at Lyman, said books have covered walkouts in the past, including the 2018 March for Our Lives protest after the shooting at a high school in Parkland. (The school board policy referenced by Principal Hunter and Seminole County Public Schools was not adopted until Oct. 30, 2018.)

Pomeranz said they have not been asked to cover up the photos, but “we have told our principal that as a staff we will not be the ones doing that because in our views it would be supporting censorship.”

Ella Snyder and other students from Lyman plan to speak at the Seminole County School Board meeting on Tuesday. Snyder says it’s the job of the yearbook staff as journalists to cover events that happen during the school year.

“This was such a big event at our school,” Snyder said. “It was exciting and it gathered, like, 150 people in the courtyard and people were happy, people were chanting ‘love is love.’ It was a very positive event and I feel like the county has just turned it into something so negative.”

For LGBT students in Florida, the controversy at Lyman is likely a preview of hardships to come as the “Don’t Say Gay” bill becomes the law of the land.