The Florida Democratic Party is perhaps the most inept state wing of our two-party system in the entire United States.

For proof, you need look no further than last night's election results. In a state that is pretty evenly split between Republican and Democrat registered voters, the Dems managed to get absolutely trounced in the first election post-widespread banning of abortion rights.

Following the uprisings against police violence that spread across the country in recent years, the best that Florida Democrats could manage to muster against a genuinely unlikeable career politician ... was an actual cop. The best candidate they could muster to challenge sniveling shitheel (and future president?) Ron DeSantis was another goddamn Republican. It's a move so out-of-touch with the wants and needs of their voter base that it borders on negligence.

It simply didn't have to be this way. But the people with money and power in the state's Democratic apparatus assured us that pulling toward the center would peel off enough disaffected GOP voters to get over the two-decade hump that Democrats can't seem to summit. These prognosticators and consultants  held onto their knowing, shit-eating grins until the exact moment that they got kicked in the teeth.

The statewide bloodbath for Democrats was highly predictable. The last candidate for governor — despite his many personal problems — advocated for progressive ideas and came within a hair of taking Tallahassee. Instead of seeing an opportunity to energize their base, state Democrats learned the wrong lesson and trotted out a conservative that excited no one. They reaped a nearly 20-point ass-kicking.

To be fair, Florida Dems aren't entirely to blame for thinking that their future lies in disaffected Republicans and "independent" voters. It's the same model that's made the Democratic Party a loser on the national level. Rather than offering new ideas and proposals that will energize the largely immiserated American public, Democratic Party planners have spent the last several decades questing after the votes of mythical suburbanites who feel disgusted by the direction of the GOP.


These people do not exist. They are people like our governor, who may not agree with all of the rhetoric of QAnon-addled idiots and venomous, anti-trans activists, but are willing to go along with it if it cements their power. Mitch McConnell doesn't worry about how his moves play in the exurbs of Lexington and all he has to show for it is everything he's ever wanted. Moderates and independents will inevitably vote for the more conservative party when the chips are down.

The Democratic Party continues to kowtow to these people at their own peril. The GOP and its acolytes are so far gone that they think Joe Biden (Joe fucking Biden!) is a socialist dictator hell-bent on instituting sharia law in your local pre-school.

Biden's years of work in defense of every major corporation as the senator from the country's biggest tax scam don't matter. The fact that he was the prominent Democrat voice defending Clarence Thomas in his eventual appointment to the Supreme Court doesn't matter. His work to make sure that student loans are the only loans that can't be discharged in bankruptcy doesn't matter. To the average Fox News viewer, he has the views of a young Mao Zedong and the brain of an old Ronald Reagan.

National Democrats have responded by cutting their own policy proposals off at the knees, means-testing them to the point of uselessness so that they won't be painted as radical bomb-throwers. It doesn't matter, because the right-wing machine is more than willing to call anything they do a Communist plot for pedophiles. 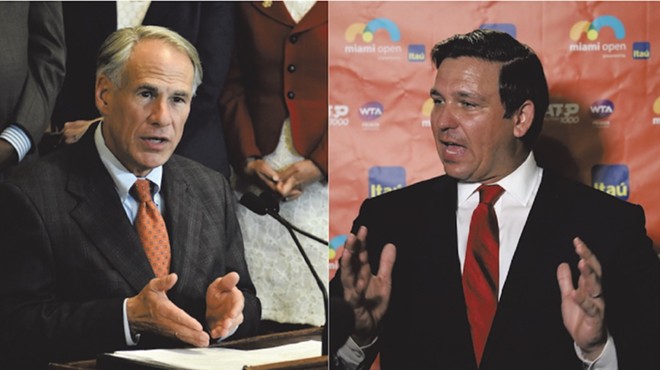 Florida Gov. DeSantis and Texas Gov. Abbott are in a race to the bottom trying to capture the MAGA zeitgeist: ‘Anything you can do, I can do Trumpier’


"Take your ideas from the Republican Party platform of 1993 for a long walk on short pier, Stalin," the endless string of Fauntleroys on Fox News' primetime slots regurgitate directly into their viewers' mouths.

Funnily enough, the actual solution is to become the stuff of Republican grandparents' nightmares. With the climate crisis and ongoing inequality, we are fast reaching the point of socialism or barbarism. It's too much to expect the Democrats — whose job, like the Republicans, is to keep the money spigot flowing for the impossibly wealthy — to start setting up barricades, but they could run candidates who nod toward the progressive views of the people who might actually vote for them.

But we've been in this game long enough to know better. We look forward to the 2026 gubernatorial  race between Republican Marco Rubio and Democrat Randy Fine.