Republican presidents have won the popular vote once since 1988, yet they’ve appointed six of the Court’s nine justices. 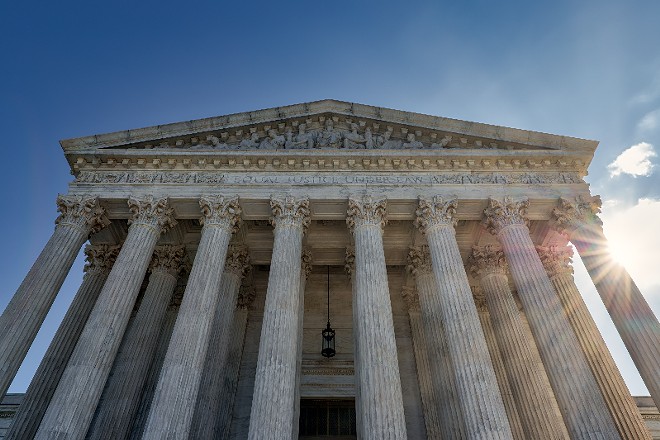 It’s possible that, by the time you read this, five extremists on the Supreme Court will have dismantled abortion rights by giving states the right to dictate women’s health care choices. [Editor’s note: They did; that decision was announced an hour before publication.]

A few hours before I wrote this, on the heels of a series of mass shootings, those same extremists — plus a chief justice who appears moderate only by comparison — ruled that the right to carry guns is so sacrosanct that it matters not whether states’ restrictions do silly things like save lives.

In both cases, the majority will likely have drawn on erroneous (Justice Samuel Alito on abortion) and selective (Justice Clarence Thomas on guns) historical interpretations to wrap their ideological fanaticism in originalist flim-flam. The defining principle of contemporary jurisprudence, it seems, is that we’re stuck with whatever the 18th-century patriarchs who founded this country failed to envision — assault rifles, women not being their husband’s property, etc. — because “historical tradition” trumps not just democracy but common goddamn sense.

To drive home how absurd this “historical tradition” rationale is: The New York gun law the Supreme Court struck down on Thursday is more than a century old. Roe v. Wade will die just short of its 50th birthday. The Supreme Court first recognized an individual’s right to own a gun for self-defense — not to carry a gun outside of the home, just to own it — in … 2008.

As Michael Waldman, president of the Brennan Center for Justice, pointed out in the Washington Post: “In 1791, when the Second Amendment was ratified, New York City had 33,000 residents. Today it has more than 8 million. To me, as a resident of New York City, the notion that thousands or hundreds of thousands of people might be walking around armed, thinking themselves a ‘good guy with a gun,’ is, frankly, terrifying.”

Justice Thomas, who hasn’t resigned despite his wife’s participation in Donald Trump’s coup attempt, shrugged that aside.

“It is true that people sometimes congregate in ‘sensitive places,’ and it is likewise true that law enforcement professionals are usually presumptively available in those locations,” Thomas wrote. “… [But] there is no historical basis for New York to effectively declare the island of Manhattan a ‘sensitive place’ simply because it is crowded and protected generally by the New York City Police Department.”

Think about Thomas’ logic: New York can’t stop people from carrying guns in Manhattan just because Manhattan is already swarming with armed cops to protect masses of soft targets. Again, safety is secondary to Thomas’ belief that James Madison — who wrote the Second Amendment 44 years before the Colt revolver hit the market — didn’t mean anything by the words “well-regulated militia” but was fine with randos packing Glocks in Midtown.

Make no mistake. This ruling will lead to preventable deaths. Bruen directly affects about a quarter of the country’s population — residents of New York and six states with similar concealed-carry laws. Coincidentally, they include the five states with the lowest per-capita rates of gun violence, as well as California (No. 7) and Maryland (No. 18).

That’s not to say New York’s law didn’t have problems that needed to be addressed. As a group of the state’s public defenders explained: “New York enacted its firearm licensing requirement in the early 20th century to prevent immigrants and people of color from possessing guns. Since its enactment, the law has justified discriminatory policing and criminalization of Black and brown people living in urban low-income communities.”

In more capable hands, the Court could have struck down New York’s law because of its discriminatory nature. But fighting discrimination doesn’t jibe with Thomas’ apparent goal of returning the United States to a time before flush toilets.

The effect of Bruen doesn’t bother me as much as the reasoning that delivered it. Because as much as the majority tried to minimize the scope of its radicalism — Alito: “All that we decide in this case is that the Second Amendment protects the right of law-abiding people to carry a gun outside the home for self-defense” — the practical effect of Bruen’s “historical tradition” demands will eviscerate gun laws for decades to come.

But the real takeaway from Bruen — and, soon, from Dobbs, the abortion case — is that the majority doesn’t care about torching what little legitimacy it has left. It cares only about furthering its ideological agenda.

As I’ve mentioned before — as we should always mention when discussing this iteration of the Roberts Court — Republican presidents have won the popular vote once since 1988, yet they’ve appointed six of the Court’s nine justices. Democratic senators represented about 40 million more Americans than the Republicans who confirmed Trump’s appointees.

A Court installed by a minority is enforcing the whims of the minority on the majority — claiming federalism when doing so is convenient, ignoring it when it’s not.

In 1937, fresh off a landslide re-election but with a conservative Supreme Court blocking key elements of the New Deal, President Franklin Roosevelt told the American people, “We cannot yield our constitutional destiny to the personal judgment of a few men who, being fearful of the future, would deny us the necessary means of dealing with the present.”

The court-packing plan he laid out in that radio address famously failed — though not entirely. Support collapsed only after court-packing became unnecessary; after FDR’s threat, the Court grew suddenly amenable to his reforms.

There’s a lesson for modern Democrats watching a revanchist Court unravel a century of progress. So long as the Court’s radicals feel unassailable, the more radical they’ll become.