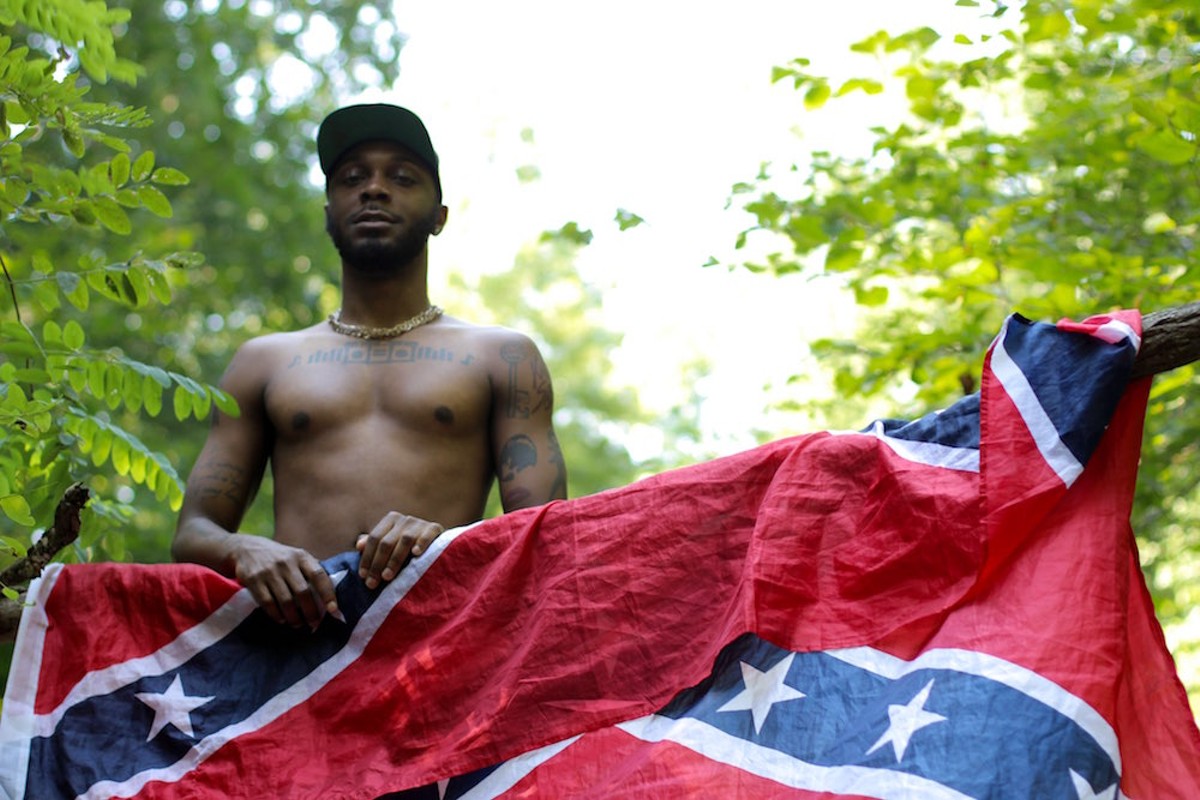 The fiery MC/producer JPEGMAFIA first pinged Orlando Weekly's radar last year with the music video for his collab with Freaky, "I Might Vote 4 Donald Trump." Over discordant, near-industrial beats, the two MCs perform the song in a lily-white suburban cul-de-sac, as suspicious residents peer out from behind windows and locked doors. Brandishing Trump campaign flags, when JPEG deadpans, "I might vote for Donald Trump / Just to say I did it," it's an incredible and jarring bluff. Or not? (To say nothing of when he sneers, "Trump era / I'll be killing the feds" at the very end.)

JPEGMAFIA aka Barrington Hendricks aka JPEG aka Peggy was born in New York, spent years in Alabama and began making music in Japan while stationed there during a stint in the military. Upon returning to the States in 2015 (Baltimore, specifically), Peggy found his sound as JPEGMAFIA on apocalyptic and wickedly funny albums like Black Ben Carson and Communist Slow Jams. These early albums kept one foot solidly in hip-hop, while running hard with the city's noise scene. He speaks affectionately of the harsh noise scene back in Baltimore, enthusing, "I don't want to be one of those dudes that forgets where I came from with the noise shit. They're the type of people that when I was younger the preppy white people would make fun of. Those are the type of white people I fuck with usually off the bat." And though he calls L.A. home now – "Every time I go [down Hollywood Boulevard] I see this fat-ass dude in a Spiderman suit. That doesn't exist in Baltimore" – his caustic edge hasn't dulled a bit.

Peggy's new album, the freshly released Veteran, is his most fully realized body of work yet. Eschewing anything in the way of a marketing strategy, the praises of Veteran are still being sung by tastemaking outlets like Pitchfork, Bandcamp and Afropunk. Peggy is sanguine about the praise: "Critical acclaim is cool and all but Rolling Stone used to give Black Sabbath [one star] and shit. ... If people fuck with it, no matter what the critics think at first, they will come around to it. I saw it last year with SZA."

Veteran is one of the more freeform and unrestrained hip-hop albums in recent memory, going beyond contemporaries like Death Grips and Clipping into way-out interzones. With Peggy handling beat-making, production and vocals, it's harrowing, angry, funny as hell and vulnerable all in turn. Steeped in punk, trap, space-age R&B and noise alike, Veteran is a dizzying work of autobiography and cultural critique.

And though the beatscapes and electronics on Veteran are undeniable, it is Peggy's vocals on Veteran that impress most. He employs a whole host of different voices, deliveries and personas along the lines of a Prince or Bowie. He screams, spits, whispers, croons, threatens and comforts all throughout the album. "Some people try to ... they have a signature style and they try to force it onto things," he says. "Fuck that, man, I'll morph into whatever the beat needs. If I need to be a country singer on a beat, fuck it, I'll do it."

The lyrics on Veteran are packed to bursting with pop culture, social and political references, working Lemmy, Mulder and Scully, feminism, Giuliani, gentrification and Tomi Lahren into his dense rhymes. Peggy points out that it's just a symptom of the internet age: "I feel like I'm no different than most people, we just get on our phones and browse and end up down a hole. ... I'm just into a lot of things – other people are too! People are into politics – and they like to smoke! I respect people like Killer Mike and Run the Jewels but I'm just a regular nigga at the end of the day. Me talking about all of this is like a reflection of society."

Peggy is happy to return to the South as part of his touring with Milo – "I like the South, it has more character than other places" – and deals with anticipation over his first Florida show with deadpan humor: "I can't wait to disappoint everyone." Judge for yourself when JPEGMAFIA opens for Milo at an early show at Will's Pub on Tuesday.