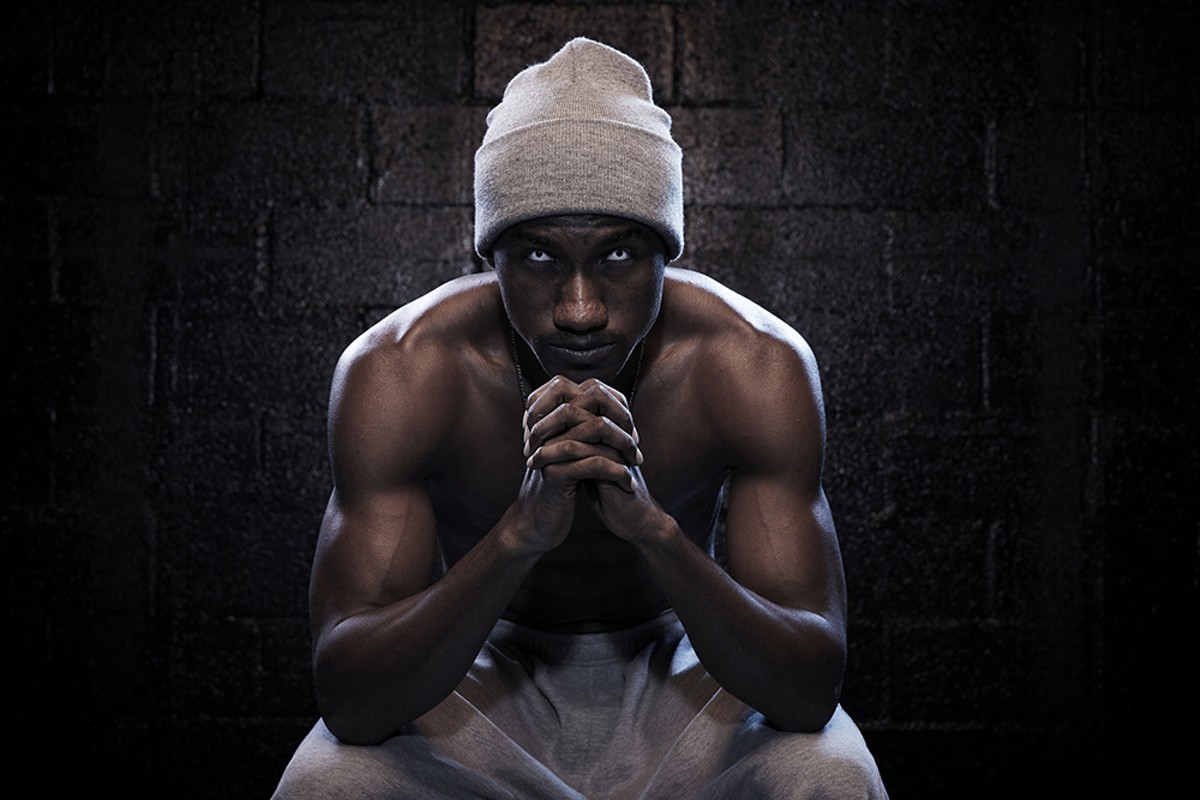 "I just don't care no more," says 30-year old rapper Hopsin, explaining the impetus for the provocative, God-doubting track "Ill Mind of Hopsin 7" off his new album, Pound Syndrome. "As I get older, I get more mature. I see life from a different perspective and it's just like, 'Why not?'"

In the video, he wanders a parched desert while intoning equally bereft and searching lyrics.

"Is this where I belong? Is it wrong to not believe in right and wrong," he asks, before ultimately turning his back on the Christian faith he fervently embraced all too recently. "My gut feeling says it's all fake ... I'll be damned if I put my own pleasures aside for an afterlife that isn't even guaranteed."

God and rap have never been close. (Maybe it was that phase when it kept saying it was gonna bust a cap in someone's ass.) That hardly inhibits Hopsin. From his clothes and white contacts to his musical choices, he's always charted his own path.

"'Ill Mind 7' is a gospel record in a way, but it doesn't feel like gospel because it's done in my way," he says, still weighing his blasphemy. "God is maybe a thing kids never heard a rapper even mention, other than saying 'ohmigod,' so at least I put the thought in their minds."

The song's the product of a spiritual crisis the author of gold-selling singles "Sag Your Pants" and "Ill Mind of Hopsin 5" has grappled with the past year. The Los Angeles-based performer even went so far as to announce he was going to quit rap in December before backing away from that decision this year.

It follows an incident in late January 2014 when a disillusioned Hopsin walked out the back door of the venue without performing, spending the show sitting at a construction site. He recounts the event on Pound Syndrome track "Fort Collins," featuring his friend and label/tour-mate Dizzy Wright.

Wright convinced Hopsin to stick with it.

"It took a lot of time to get what I have, so many years, and he just didn't want to see all that work go to waste," Hopsin recalls. "He just made me see it from a different perspective. So everybody had made an album for 2015, so I just decided to make another one as well. I didn't want to be the weakest link on the label."

The main issue seems to be one of disgust for his peers and what radio endorses.

"It's just that the mainstream world is very sided towards bullshit music," he says, citing the Auto-Tune boom. "If it was me with my control over it, I would just be, 'I don't care, if this guy can't rap, he will not be played' ... because that would keep rap alive. If Dr. Dre worked at a radio station, I can't see this bullshit getting through."

Hopsin has taken time during this past year to heal himself and balance the work/life demands that amplified his frustrations. He's trying to compartmentalize his life to keep it away from the backdraft of this Hopsin character he's created. Wearing that mask for weeks at a time can be exhausting.

It's sort of Hopsin's personal take on "No Sleep Till Brooklyn."