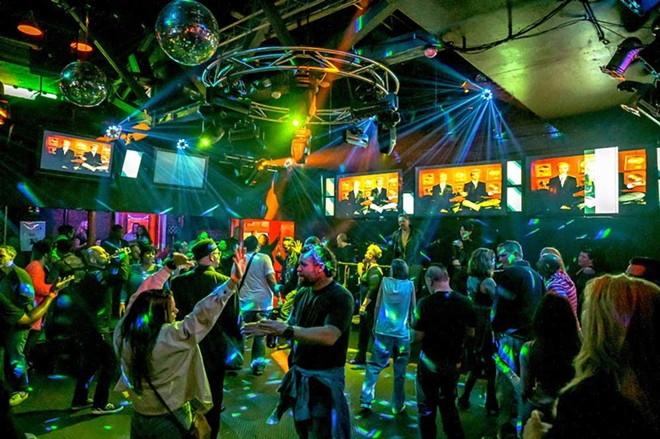 Legendary nightclub Barbarella has officially left the building — its original one downtown — after nearly 35 years. In Orlando club history, this is as momentous as it gets.

It breaks the brain to imagine this nightlife cornerstone outside of downtown. No one’s ever had to before. The very idea of such a hallowed institution no longer being in the original and prime location that it’s earned is inconceivable, sacrilegious even. But it’s not just a changing of the times that’s happening right now, it’s a changing of the guards. And downtown has definitely been pivoting into a post-cool era.

Back when downtown was a total urban desert in terms of night culture, Barbarella (in its original iteration as Beach Club) was one of the earliest settlers on that frontier as an upstart alternative music oasis in a barren cityscape. It went on to become the longest running club on the Orange Avenue strip.

In that time, though, downtown Orlando has gone from gritty underground playground to mainstream nightlife mecca, with all the diminishing returns that gentrification entails. Now, like the exclamation point on the succession of changes that’ve steadily drained downtown of much of its organic soul and substance, Barbarella joins the exodus of the OGs.

Departing a place with roots for generations will always be painful and fraught. But context plays into the setting, too. For a very long time, I was as much of a downtownie as they come. A predominant fraction of that time involved, and often even revolved around, Barbarella. From the original alternative music days, to the acid-jazz age, on through the indie-rock years, Barbarella was the beacon and the bastion. Downtown, however, isn’t the same.

So Barbarella is making the audacious move to relocate itself — and a significant chunk of nightlife heritage with it — out on an exurban fringe. Specifically, it’s moving into an industrial park by the developing but not yet actual Packing District. It’s a prospect that probably raises a lot of eyebrows and anxiety, but there’s some precedent here.

Barbarella itself set a historically defining one back in the 1980s when it made a gamble on a then-desolate downtown. So Barbarella breaking unestablished ground again is in many ways a return to the club’s original underground spirit.

Now, it’s back out to the edge of the scene. And eerily enough, it leads full circle back to the old warehouse days of seminal and likeminded nightclub Visage in attitude, setting and even location. (Visage was less than three miles away from Barbarella’s new digs.)

Still, the move’s an extraordinary leap of faith. But so was the original Barbarella. Will the new one capture magic again? We’ll begin to see this weekend at the club’s grand unveiling on Saturday, April 16, at 4141 N. John Young Parkway. In my book, though, it’s Barbarella forever.