Send a News Tip
THIS LITTLE UNDERGROUND
Del the Funky Homosapien and Sean Shakespeare, The Social, May 23 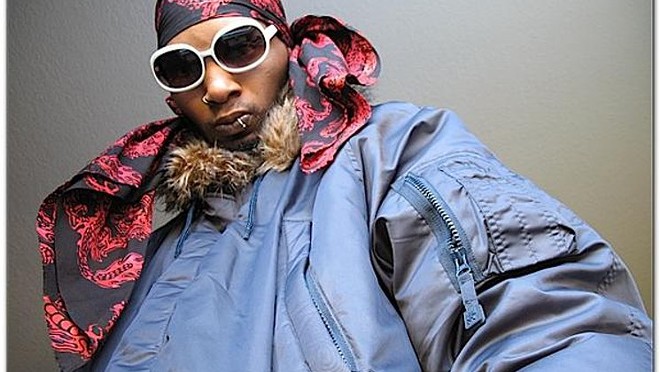 Del the Funky Homosapien
In perspective and aesthetic, Del the Funky Homosapien has often seemed more from outer space than the West Coast. The chill step and left lean of his signature lyrics and flow have made him one of the most consistently intriguing rappers of his generation. That he sports a résumé that includes Deltron 3030 and Gorillaz is no accident. Del the Funky Homosapien at the Social
Backed by fellow Hieroglyphics crew member Domino, Del did a career-spanning performance including material from the aforementioned high-profile side projects. The set went from golden old-school vibes on out to his odder orbits, all done with easy charisma and skill that neither tries too hard nor needs to. Dude killed it from the pocket all night long. Once the crowd started sending shots up on stage, Del’s stream of consciousness only got more outlandish, mixing life observations with allusions to Hellboy. The more real he got, the clearer it became that he’s far more indie hero than glitzy star. Even more, he’s a true original who comes from a time and school where being weird wasn’t license to slack on your technique. Talking to all you mumble rappers out there right now. Sean Shakespeare at the Social
Opening was local MC Sean Shakespeare, who blends modern outlook with classic hip-hop style. With clean, tight lines and acrobatic fitness, he rolls in a natural cadence that’s technical but never tense. Backed by good, interesting tracks, he’s one of the most complete of the young artists the Orlando-based Second Subject crew.