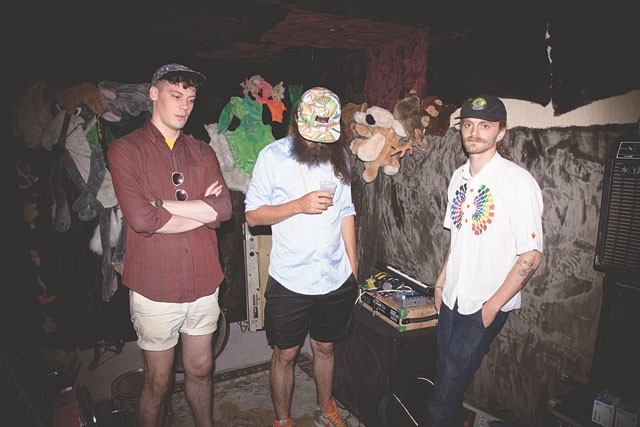 ZS with THE UCF PERCUSSION ENSEMBLE

For a lot of people, the live experience of electronic music is rather dull. Watching someone push buttons on a laptop is nowhere close to the live experience of a full band or a hip-hop show. It's like, as Zs frontman Sam Hillmer puts it, for all we know, that guy is up there checking his email. But while his band's name calls to mind a certain sleepy state, the snooze factor of this rampantly growing genre fails to apply to the avant-garde Brooklyn band's carefully cultivated live experience.

"You have to address performance, somehow. You have to deal with the fact that that's what you're doing up in front of people and think about why that's interesting to people," Hillmer says of commonplace electronic bands. "That's a shortcoming of that musician in creating an interesting performance."

For Zs, a band that features different musicians pivoting around Hillmer with each release, the music seems to transcend any of the typical criticism associated with this genre for a mildly surprising reason. Two current members are classically trained: Hillmer on the sax and Patrick Higgins on guitar. Whereas most who go that route tend to become obsessive over clinically mastering their instruments, the conversation that Hillmer started 13 years ago was focused more on "transcending and extending that repertoire of sound" associated with classical and jazz music, as Higgins puts it.

"I think I had a growing dissatisfaction with what jazz had to offer me creatively, so I think I was just interested in developing new types of sounds and music that was not restricted by the expectations of a genre," Higgins says.

But the dialogue that Zs is furthering does not, as some might expect, exclude those who aren't classically trained. Their drummer, Greg Fox, admits that reading sheet music is not among his strengths, but what Hillmer saw in him was a reactive quality that, from lineup to lineup, remains the common thread between different Zs albums. Rather than seek out sounds on their instruments as independent components to a song, like a layer of drums, a layer of guitar, then a layer of sax, they instead combine each player's creatively manipulated sounds into collaborative layers that form the building blocks of a process that sounds nearly identical to classical arrangement.

Due to the interest of local audiophile organizations like the Civic Minded 5, Accidental Music Festival and Tiny Waves, the Orlando date on Zs' tour was actually the impetus for the tour itself. Their set at Timucua will accompany an immersive performance by the UCF Percussion Ensemble, playing Iannis Xenakis' "Persephassa" in a setup attempting to re-create the listening experience close to how it was originally performed: with the audience in the middle and musicians positioned around them in the balconies, on the floor and on stage. Additionally, each member of Zs will perform at Lil' Indies the following night to share their other projects, Diamond Terrifier (Hillmer), Guardian Alien (Fox) and Higgins, who just released his solo album, Stereo. These will be inimitable nights, but it seems we have something to offer the musicians in return.

"One of the first shows that was booked for this tour was the Zs show in Orlando. Things were kind of built around it, actually," Fox says. "I also know that Orlando has really good Vietnamese food. I'm really glad we're going to be there for two days, because I'm going to eat as much pho as I can get."