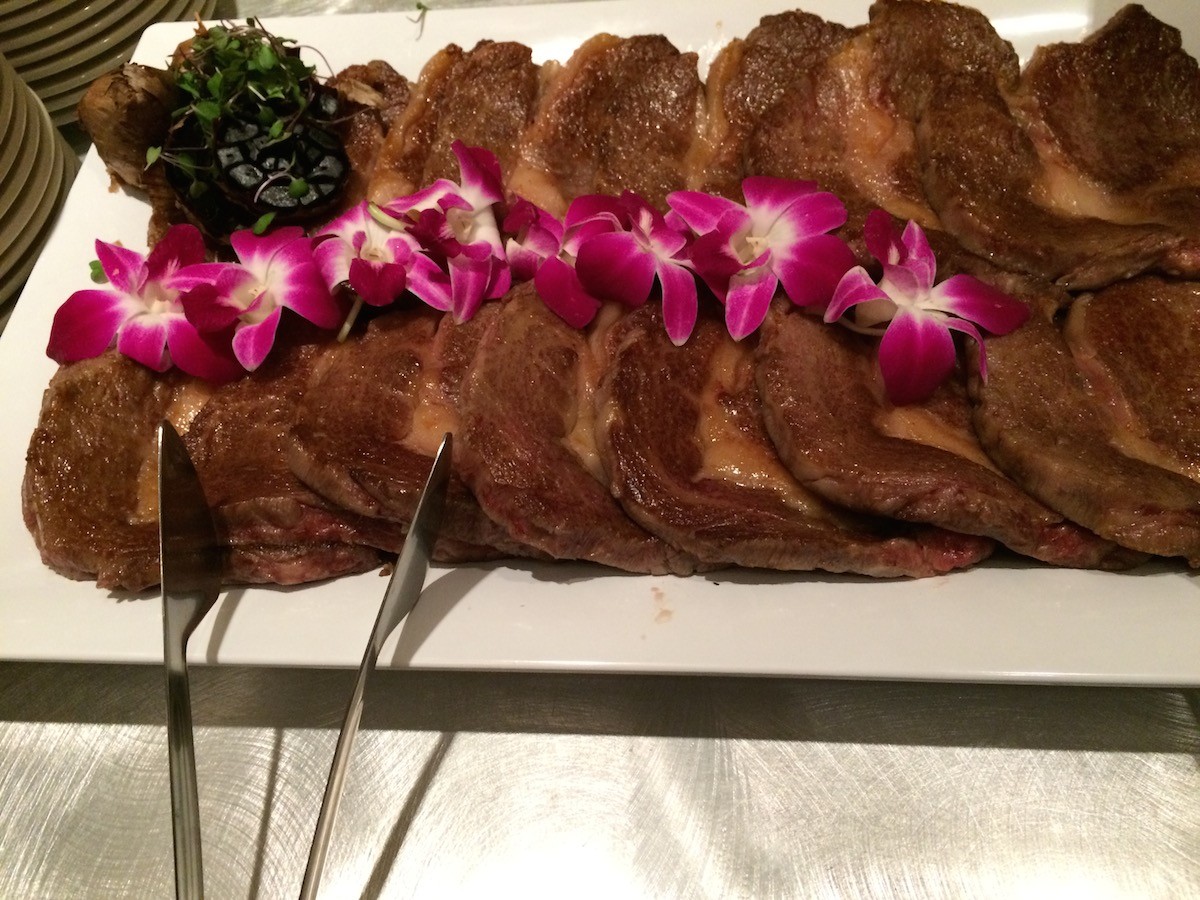 When it comes to Japanese beef, we’ve all heard of Kobe, but what of its main rival, Matsusaka beef? On Jan. 22, 2015, a Japanese delegation from Mie Prefecture (of which Matsusaka is a main city) introduced their superlative brand of beef to the United States for the very first time, and it happened right here in Orlando.

Why Orlando? “Because visitors from all over the United States come here,” said vice-governor Eiichi Ishigaki through an interpreter. “Matsusaka beef will be very expensive,” he continued, “and visitors to Orlando like to eat good food.” Indeed, those with hefty expense accounts will certainly relish the opportunity to savor what’s widely considered to be the finest of Japanese beef. The Special Grade Matsusaka Beef we enjoyed on this historic occasion came from virgin cows that were fattened for at least 900 days, were fed beer to stimulate their appetites, massaged and groomed regularly, raised in individual pens and, as noted in the press release, “showered with affection. The result is supremely marbled beef that literally melts in your mouth (and in your hand – we tested it). So what can diners expect to pay for Matsusaka beef? We posed the question to Matsusaka mayor Mitsushige Yamanaka, who whipped out a pen and scribbled “¥5,000 for 100g,” which roughly equates to $200 per pound, and that’s wholesale. To lend some perspective, a Matsusaka cow was auctioned off last year for $200,000, with the highest auction price to date being $500,000 in 2002. Bottom line: When high-end restaurants get their hands on Matsusaka beef, they’ll surely pass the skyrocketing cost onto the customer, just as they do with Kobe beef.

We’ve seen a lot of restaurants advertise “Kobe beef” on their menus of late, be it Kobe burgers, Kobe sliders or Kobe what-have-you. The fact is, Kobe beef – that is, genuine Kobe beef from Kobe Prefecture in Japan – is only available in miniscule quantities in this country, and only at a scant handful of restaurants – Mizumi and SW Steakhouse at the Wynn Resort Las Vegas, Jean-Georges Steakhouse at the Aria Resort in Las Vegas, and 212 Steakhouse in New York City serve it. You’ll pay up to $45 per ounce, with 4- or 6-ounce required minimum orders. In fact, it was only on Aug. 27, 2012, that the USDA even allowed the importation of Kobe beef into this country. Forbes magazine’s Larry Olmstead did an in-depth, four-part exposé on purported Kobe beef in the restaurant industry, calling it “food’s biggest scam.” You’d be well-served in reading it. More and more often, the words “domestic” or “American-style” precede “Kobe” on menus (as in Rusteak’s menu), but it’s all just a ploy. This isn’t Kobe beef – not even close. In fact, it would be a heartbreaking waste to grind superbly tender, richly marbled, buttery-textured Kobe or Matsusaka beef for the purpose of making a burger.

Should Matsusaka beef become available in restaurants in the U.S. (a marketing plan is currently being initiated), here’s hoping the gimmicks and duplicity cease, though something tells me the appearance of “American-style Matsusaka” and “Domestic Matsusaka” on restaurant menus is an inevitability. At current production standards it seems the genuine product will be difficult to come by; just 10,000 cows are certified Matsusaka beef each year, and the Special Grade beef we tasted is just the top 3.5 percent of those 10,000. If you want to be absolutely assured that what you’re eating is authentic, just ask the restaurant to see the certificate of authenticity. All Matsusaka beef is traceable, thanks to an intricate identification and tracking system, so if the restaurant has truly procured the pricey beef, they should be able to produce the certificate. It never hurts to be certain you get what you paid for, because when it comes to Matsusaka beef, there ain’t nothin’ like the real thing.