Ban on front-yard vegetable gardens: "like punching a baby" 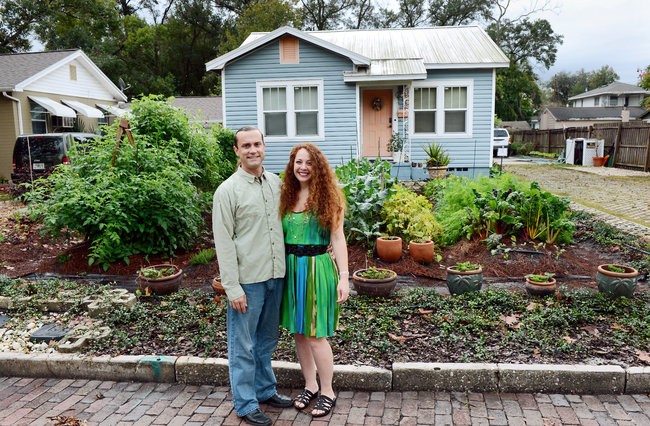 Photo by Todd Anderson for the New York Times

"Orlando’s growing season is nearly year-round, and Mr. Helvenston, a self-employed sustainability consultant for the building trade, said he saw the garden as 'a budget thing' — a money-saving supplement to the chicken coop he and his wife, Jennifer, installed a few months later behind their house. Since his backyard doesn’t get much sun, Mr. Helvenston ripped out the lawn in his front yard and put the 25-by-25-foot, micro-irrigated plot there. The unorthodox landscaping went largely unnoticed for months, perhaps because he lives on a dead-end street next to Interstate 4."

The Helvenstons, who live and plant in College Park, aren't alone in finding themselves at odds with neighbors and/or municipal bureaucracy simply for tending edible plants on their own property. With the rise in sustainability consciousness – and, let's face it, the dive in paychecks – more and more people are turning to DIY. Municipal codes may come as a nasty shock, though, says Kurutz: "Orlando’s code, for instance, specifies that planted shrubs 'shall be a minimum of 24 inches in height' and 'spaced not more than 36 inches apart,' while berms 'shall not exceed a slope of 3:1.' The code goes on to list no less than 295 approved and prohibited species."

Of course, none of it was a problem until one of Helvenston's neighbors, absentee landlord Pedro Pedin, complained.

Mr. Helvenston, who has begun referring to his yard as a “patriot garden,” an overt reference to the Victory Gardens planted during World War II, got back on the line, expressing disbelief at the response by Mr. Pedin and the city of Orlando: "Who doesn’t like a garden? It’s like punching a baby."

(I guess that means if you have a neighbor you don't like, you can call code enforcement about his 4:1 slope berm or stupid little 18-inch shrubs? But we digress.)

The story goes on to quote Jon Ippel, sustainability director for the city of Orlando (wait, we have that? That's awesome): "Mr. Ippel ... said Orlando is all for sustainability at the grass roots level. 'We’re not opposed to gardens,' he said. 'We allow chickens in the community. In our view, the story got blown out of proportion.'"

So grass roots are OK in Orlando ... as long as it's JUST grass, and not kale or something "messy" (Pedin's word) like that.