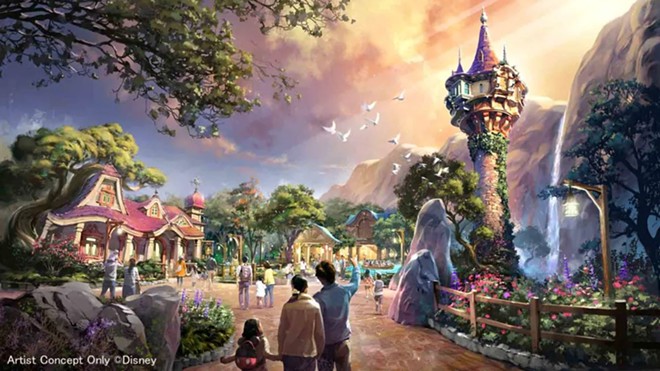 Image via Disney
The Tangled area of Fantasy Springs
Every single Disney resort in the world is now adding new attractions.

Meanwhile, in Orlando, Epcot is in the midst of the biggest overhaul in its nearly 40-year history. The Magic Kingdom is getting its first thrill ride since Splash Mountain’s opening in 1992, the Jungle Cruise is getting overhauled, and the aforementioned flume ride is about to be completely rethemed. Tokyo Disneyland just welcomed a new Beauty and the Beast trackless dark ride and a Big Hero 6-themed whip-style flat ride. But none of the expansions are to the scale seen at Tokyo DisneySea.

The estimated $2.5 billion expansion will cost two and a half times what it cost for Disney to build Stars Wars: Galaxy's Edge. It will see a brand-new theme park land, with three new rides, three new restaurants, a large gift shop, and a 475-room luxury hotel that will be home to two additional restaurants, a lounge, and a gift shop. In recent days, Disney has released new video footage of a scale model of the land, giving us a better understanding of what to expect. 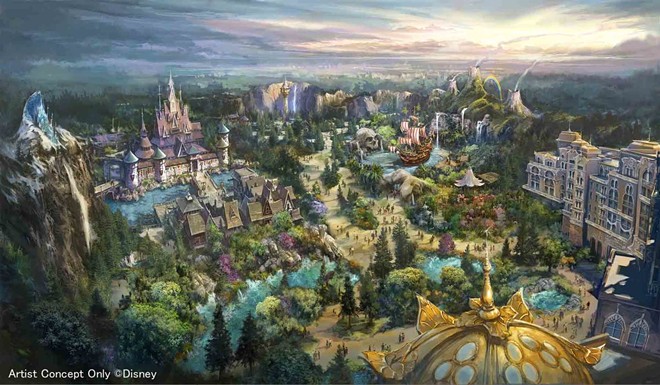 Image via Disney
Fantasy Springs, a new land coming to Tokyo DisneySea
Known as Fantasy Springs, the expansion is viewed as the evolution of the Fantasyland concept that first debut with Disneyland in 1955. Peter Pan, Frozen, and Tangled will all be present within the land, each receiving their own fully immersive mini area. The design is similar to New Fantasyland at Magic Kingdom but with a far grander scale. Like New Fantasyland, the different intellectual properties will live alongside each other but with little visual intrusion between one another thanks to rockwork and buildings designed to block sightlines.

The use of multiple properties within a single land has fallen out of favor with many theme park designers in recent years thanks to the success of fully immersive lands such as Universal’s Wizarding World and Disney’s Pandora – The World of Avatar. Still, the move to incorporate multiple franchises within a singular land allows it to reach a larger audience. As top-shelf franchises, like Star Wars and Marvel, are realized in theme parks, the remaining options may not see comparably high demand from guests.

Similar Frozen-themed lands are in the works for Disney Studios Paris and Hong Kong Disneyland, with the Hong Kong version including a Frozen version of Seven Dwarfs Mine Train known as Wandering Oaken's Sliding Sleigh.
image-5] The Tokyo version of the Frozen ride is larger than Epcot or the ones under construction at the other parks, leading to speculation this one may use the magnetic boat guidance system first seen on Shanghai Disneyland’s Pirates of the Caribbean. An attraction using this technology has also been rumored for Walt Disney World, with the strongest rumors of it going to Animal Kingdom or Epcot.
Fantasy Springs is similar in design to New Fantasyland and uses some of the concepts first imagined for the Florida land. Within the Peter Pan section of the land, a carnival-style flat ride themed to Tinker Bell is identical to one proposed for the Pixie Hollow area of the original New Fantasyland. That section eventually was cut, and the more thrilling Seven Dwarfs Mine Train and an expanded Dumbo area were instead added to the plans.

A brand-new Peter Pan attraction is planned for Fantasy Springs. While no official details of the ride have been shared, the shape of the building and public documents showing some details of it have led some to believe it will use a ride system similar to Pandora’s Flight of Passage. That attraction was previously rumored for the Tokyo resort as part of a new third theme park. Ultimately, the resort opted for an expansion to Tokyo DisneySea instead of the third gate. 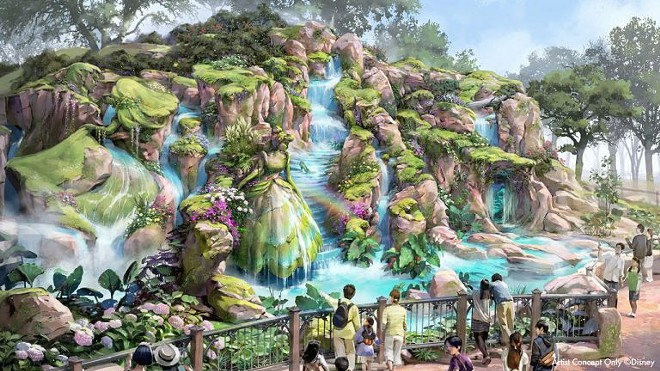 Image via Disney
The entrance to Fantasy Springs
Guests will enter the new land via a cavern system surrounded by lush tropical waterfalls, slightly resembling the Moana-themed water-based walk-through attraction now under construction at Epcot. 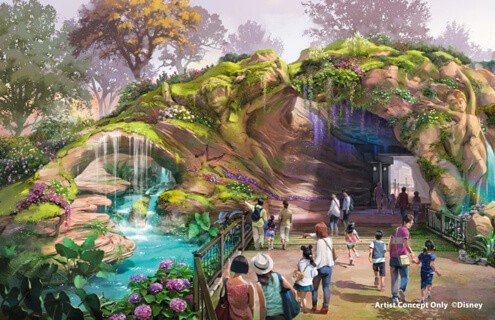 Image via Disney
The entrance to Fantasy Springs
All three mini-lands in the expansion were mentioned in marketing materials published by Disneyland in California as part of their push to update the zoning plans for the Anaheim-based resort. On a website sharing details on the DisneylandForward proposal, Disney calls the Tokyo DisneySea expansion “the perfect inspiration or the future of Disneyland Park.” The site also explains, “With DisneylandForward and more flexibility within our existing properties, new lands and adventures like those underway at Tokyo DisneySea and Shanghai Disneyland could inspire new experiences here.”

The likelihood of the Tokyo DisneySea land being realized within another Disney park any time is slim. The Tokyo Disneyland Resort is fully owned by a third party, the Oriental Land Company, which works within a franchise-style agreement with Disney. The unique arrangement allowed the resort to be realized during a period when the Disney company was struggling due to lagging box office returns and cost overruns related to expansions to its Florida resort.

Even when compared to Shanghai and Hong Kong, where Disney is a minority shareholder, the Tokyo resort stands apart thanks to its numerous unique attractions and ambitious theming. When developing attractions for their Asian resorts, Disney typically provides an undisclosed exclusivity agreement which doesn’t allow for the attraction to be replicated at another Disney park for a pre-determined time period.

While it is understandable that both Frozen and Tangled were included in the plans, thanks to their ongoing popularity and lack of in-park representation, the addition of Peter Pan comes as a bit of a surprise. With a rise in awareness of racial inequities, the film’s racist portrayals of indigenous peoples have come increasingly under fire. The 1953 film features is a song where multiple racist terms are used to describe a group. The scene is replicated in most Peter Pan attractions, where guests fly over a village of teepees and see the group sitting in a circle playing drums while wearing stereotypical attire. 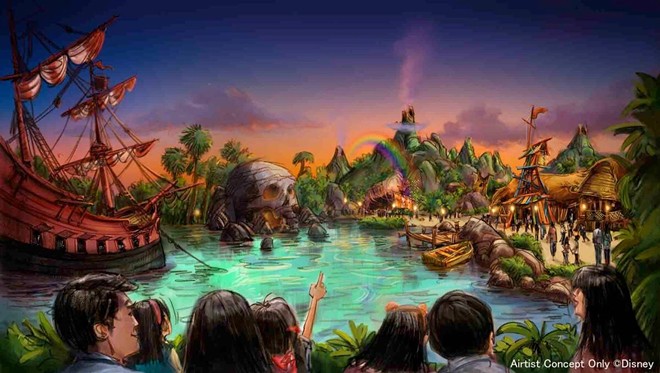 Image via Disney
The Peter Pan area within Fantasy Springs
The highly problematic scene from the film was updated when it was reworked as a musical, with the song rewritten to focus on bravery. On Disney+, the film is one of only a handful to receive a warning label that in part states, “This program includes negative depictions and/or mistreatment of people or cultures. These stereotypes were wrong then and are wrong now.” Earlier this year, Disney+ removed Peter Pan and other films which have received the cultural warning labels from being accessible via kids profiles.

Within the parks, the leaked list of attractions to receive culturally sensitive updates included Peter Pan, and the dark ride is thought to be the next major one to see an overhaul. In a video of the attraction published by Disneyland Paris earlier this year, the ‘Indian Village’ scene and references to Tiger Lily, the daughter of Neverland's indigenous ‘Indian Chief’ and one of the characters who feature numerous racial stereotypes, were digitally removed. The Fantasy Springs logo features lilies, which some have pointed to as a possible reference to Tiger Lily.

The Oriental Land Company has been more hesitant to acknowledge problematic scenes within their rides. Many of the updates seen at other Disney parks have yet to make their way to Tokyo. After Disney announced it would be updating Splash Mountain in Florida and California, the Oriental Land Company remained noncommittal to having its version of the attraction updated. 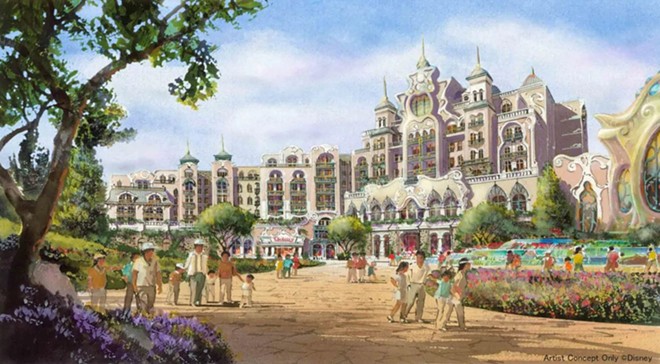 Image via Disney
The yet-to-be-named hotel within Fantasy Springs
Also featured within the new land is a hotel. The yet-to-be-named hotel will be the most luxurious at the resort and has a whimsical, art nouveau style. Little is known regarding the 475-room hotel, but it will be the second ‘in park’ hotel at Tokyo DisneySea, which is also home to 502-room Hotel MiraCosta. That hotel is widely viewed as one of the best hotels Disney has ever built and is a bucket list stay for many Disney fans.

The trend of in-park, or park-adjacent, hotels seem to be heating up after a lull. Disneyland Paris debuted their  hotel, which sits above the park’s entrance, in 1992. The next park linked Disney hotel opened in 2001 with Disney's Grand Californian, which overlooks Disney California Adventure. That same year saw the opening of Tokyo DisneySea and the Hotel MiraCosta.

With its use of an in-park hotel and the mix of intellectual properties all found within their own fully immersive areas, Fantasy Springs is a good representation of the future of theme parks. 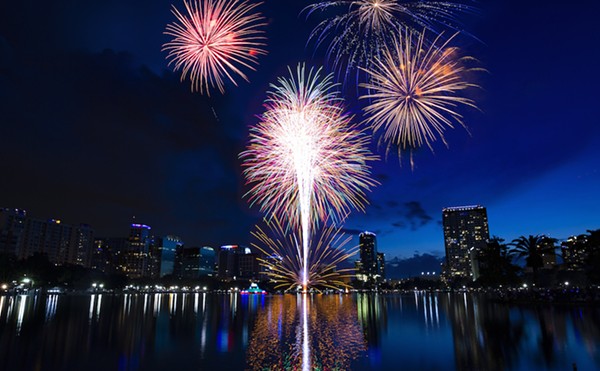