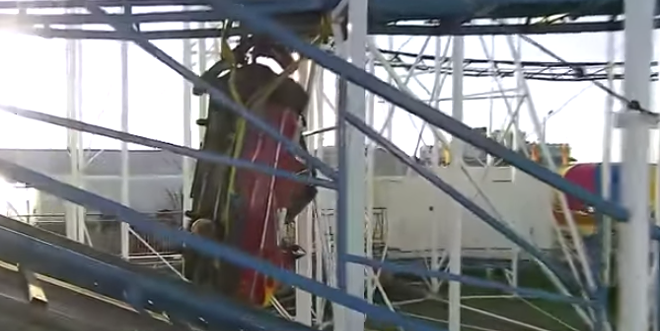 In 2013, things were looking up for Daytona Beach. A Hard Rock-branded hotel was just announced, the speedway was in the midst of a nearly half-billion-dollar update, and for the first time, the city’s historic beachside boardwalk was home to a roller coaster.

Daytona Beach officials declared a “renaissance” was taking place. They were spurred on by Gov. Rick Scott, who pointed to the eight-story-tall Sand Blaster roller coaster in Daytona Beach as the latest initiative to help draw more tourists and future residents to the state.

By the spring of 2017 things had changed. NASCAR viewership was down, meaning fewer people saw that shiny new Daytona track. Numerous hotel projects across that city had been scaled back, delayed or canceled altogether. And that coaster that was supposed to make people flock to the state was instead becoming known for questionable operations.

The coaster was shut down in May of 2017 with the owners owing tens of thousands in back taxes after it failed an inspection due to more than a dozen violations, including excessive corrosion, cracked bracings, damaged bolts and an undefined electrical problem.

Many thought that this would be the last of the Daytona Beach roller coaster, but by the end of the summer, the rides along the Boardwalk were reopened after a deal between the coaster’s owners and a new operator who brought in other rides to the same lot. Local business partners Ed Kennedy and Stan Manousos were, after numerous updates to bring it up to code, able to keep the Sand Blaster and operate it in a partnership with Daytona Beach Boardwalk Amusement Rides Inc., who brought in a dozen new rides to the lot.

In an interview with the Daytona Beach News-Journal, the owner of the lot where the coaster and other rides operate said Kennedy and Manousos had planned to close the coaster by September, but that closure never happened. Instead, the area was hit by Hurricane Irma, causing wide-spread damage across the city. Some rides at the Daytona Lagoon were damaged beyond repair but across the street, the rides at the Boardwalk, including the aging coaster, were mostly spared. The coaster reopened just days after the hurricane.

By the beginning of this year, things were looking up once again for Daytona Beach. The Hard Rock Hotel, while in a different location than originally planned, opened. The massive One Daytona shopping and entertainment complex is drawing in record crowds, and Daytona’s new retirement community, Latitudes, ranked top in the nation. But things were not the same over on the Boardwalk. 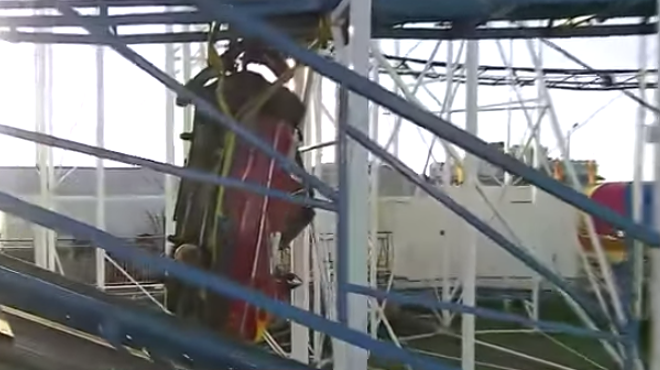 
The Sand Blaster hit yet another bump when in May it again failed an inspection. This year’s report included more mentions of excessive corrosion and issues with bracings. It finally reopened last Thursday. Despite passing a state inspection (by the same department overseen by Adam Putnam that also didn’t correctly vet more than 350 concealed weapons permits), some issues seemed unaddressed.

Riders Thursday afternoon took cell phone video of workers welding the ride even as the riders rode by. Then, just hours later, Central Florida was rocked by one of the most severe and well-documented ride accidents ever to hit the region when nine people were sent to the hospital after two passengers fell 34 feet, with others screaming as they dangled off the edge of the track.

Altogether, 10 riders were rescued from the coaster.

Manufactured in 1975, the Sand Blaster opened as the Super Italian Bobs at a small amusement park in Illinois. Two years later the park shut down and the coaster was moved to Phoenix, Arizona, where it operated under the name Sidewinder. When that park closed in 1983, the ride was moved to DelGrosso's Amusement Park in Tipton, Pennsylvania, where it reopened in 1987. It stayed at that park until 2003. DelGrosso’s then sold the ride to the Blue Diamond amusement park in Delaware where the ride opened with the 2004 season. Known as the Blue Diamond Streak, the coaster was the central icon for the small park. Once that park closed in 2007, the third park to shut down after purchasing the coaster, the ride was moved into storage. By 2010 it was listed on eBay for $225,000. It sat in storage for sale until 2012 when Kennedy and Manousos purchased it.

After pouring a million dollars into upgrades on the coaster, including updates to make the lighting more sea turtle-friendly, it finally opened in Daytona Beach. Many of the original features, including a manual brake for the station, remained. Despite the million-dollar upgrade, ride operators were still pushing the ride vehicles out of the station by hand and occasionally needing to push the vehicles back into the station.

Seven of the past 18 months have seen the Sand Blaster closed for failing to pass inspections. Now the ride may never reopen, meaning the history of Daytona Beach’s only roller coaster may finally come to an end.