After years of delays, Daytona Beach finally has a Hard Rock Hotel and less beach to drive on 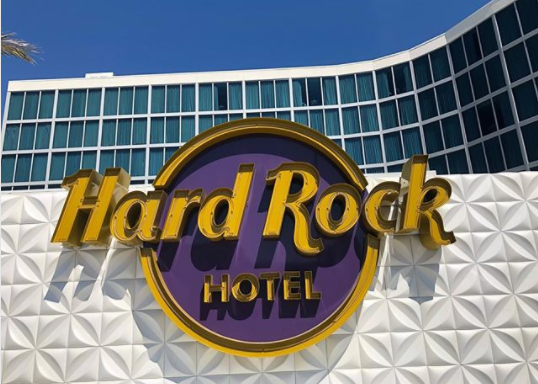 Back in 2014 a Hard Rock hotel was first announced for Daytona Beach, which began the long, tumultuous journey that led to the recent opening of the hotel.

The hotel finally opened last month, after a phased opening that began in mid-February, and it's nothing like the one announced four years ago. I not even on the same site.

Originally, the Hard Rock Hotel was to have 240 rooms in a luxury setting. The high cost of the condo-hotel rooms meant that investors were difficult to find. One of the big reasons investors pulled out was a tidal wave of lawsuits regarding beach driving behind the hotel. As part of an attempt to draw new luxury hotels to the city, officials had agreed to ban beach driving behind the new hotel developments. Blocking driving behind certain developments was less than popular with many residents, but despite the dozens of lawsuits the city refused to backpedal on its decision. Even with the city sticking with Hard Rock, the lawsuits were enough to scare off more investors.

Just as the Hard Rock project began to falter, another opportunity opened up just down the street. The infamous Desert Inn, which was at one rated as the third dirtiest hotel in the nation by TripAdvisor, was seized by authorities after the owner’s son was convicted of possessing child pornography – some of it created at the motel itself. According to a Department of spokesperson, the $6 million sale of the motel is the largest child porn-related forfeiture in U.S. history. The sale was viewed as a major win for the city, with Volusia County Sheriff Mike Chitwood calling the motel “veritable hive of criminal activity.”

The new owners announced a Westin resort, and also negotiated a beach-driving ban behind the hotel. With the Hard Rock development dying, the Westin developers, Summit Hospitality Management were able to secure the Hard Rock brand for its new development on the Desert Inn site.

The new Hard Rock Hotel is one of the first major hotel investments on Daytona Beach in more than two decades. At roughly a fifth of the cost of the original $150 million the new hotel offers 20,000 square feet of meeting space along with three new dining options.

Sessions, the signature restaurant of Hard Rock Hotels, is included. The beer selection at the outdoor pool bar and at Sessions includes a focus on local breweries, along with an expanded wine menu compared to a typical Hard Rock Hotel.
Interestingly, one of those three dining options isn’t the Hard Rock Café that many had hoped for. It’s not uncommon for Hard Rock Hotels to not feature the cafes. The Seminole Hard Rock Casino in Tampa didn’t have a café for years, though it added one a more recent remodel.

Part of the issue is around what was exactly required by the hotel. The hotel was required to be certified by the Hard Rock brand by the end of February. That did happen but some residents point to the fact the hotel wasn’t fully open by the date as a potential breach of contract, promising even more legal action.

With seven stories and more than 200 rooms, the new hotel is filled with the classic Hard Rock touches, including a Daytona-inspired memorabilia collection. A spa, numerous pools, an outside bar and a kids’ club round out the hotel’s amenities.