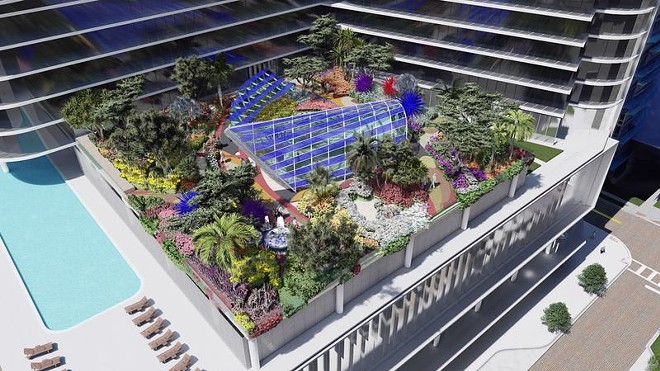 Via Pelli Clarke Pelli
Orlando Museum of Art's planned downtown location isn't going to rest on the laurels of the nearly 100-year-old institution. Per a new report from GrowthSpotter, the OMA campus will include the first-ever rooftop garden of glass sculptures by artist Dale Chihuly.

OMA plans to create both a sculpture garden and a garden garden on the ninth floor of the 33-story planned development. The tower will be a hybrid convention center, museum, hotel and condominium building. The garden will only be accessible via the museum's ninth-floor gallery, per the request of its funder, former OMA trustee Alan Ginsberg.

“Without Mr. Ginsburg, this would never happen,” OMA Director Aaron De Groft told GrowthSpotter. “And in talking with me about our plans, he came up with this.”

The garden will be designed as a lush "oasis" with Chihuly sculptures throughout. The garden plans to capture both rainwater and solar energy, so that it might sustain its plants and be lit up at night. The garden will also include an all-glass conservatory on what was originally going to be unused rooftop space.

“They were not going to use the roof,” De Groft said. “Until I kept pushing and pushing and saying, I would like to have an event space on the roof.”

Rendering via SDG
Pelli Clarke Pelli architect William Butler will design the space and he said the Chihuly pieces will be chosen for their weather-readiness as well as aesthetic considerations.