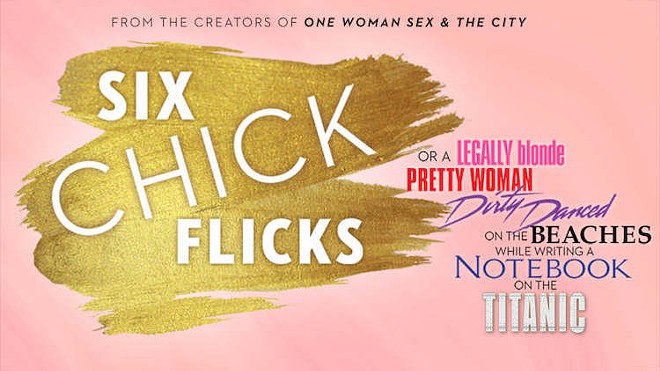 In ancient times — say, the mid-2000s — you could go to a movie theater and see a movie that did not involve superheroes or interstellar explosions, but rather focused on female characters and romance. Today, unless its title is Little Women, those films have been banished from cinemas to streaming services and the Lifetime network. Luckily, the crack comic team Kerry Ipema and KK Apple are here to affectionately skewer six classics from the era when so-called “chick flicks” could still succeed at the box office.

The show, which was created in collaboration with “Fringe God” TJ Dawe, consists of 10-minute, two-person parodies of a half-dozen movies, beginning with Titanic (whose buoyant doors become a running gag) and ending with a ridiculous recreation of Dirty Dancing’s iconic choreography.

Eighty percent of the script is a straightforward spoofing of the movies’ plots and performers, which Ipema and Apple execute with SNL-worthy aplomb. But they also occasionally step outside the narrative to point out how these supposedly female-friendly films reinforce the patriarchy by pitting women against each other and reinforcing unrealistic expectations; their repeated references to the “Rose Effect,” which often infects screenplays written by men, are particularly pointed. Although I laughed out loud even at the lampooning of The Notebook, which I’ve never actually seen, I ultimately wished the subversive elements were even sharper, so fans of these films couldn’t so easily laugh off their problematic elements. By the time Ipema and Apple took their well-deserved final bow, I mostly just wanted to watch Legally Blonde again, which I’m not sure was their intention.

[Note: This review was originally published during the 2020 Fringe Winter Mini-Fest. The current show is the same, with some minor updates referencing the imminent repeal of Roe v. Wade.]

Tickets and show info: Six Chick Flicks or a Legally Blonde Pretty Woman Dirty Danced on the Beaches While Writing a Notebook on the Titanic