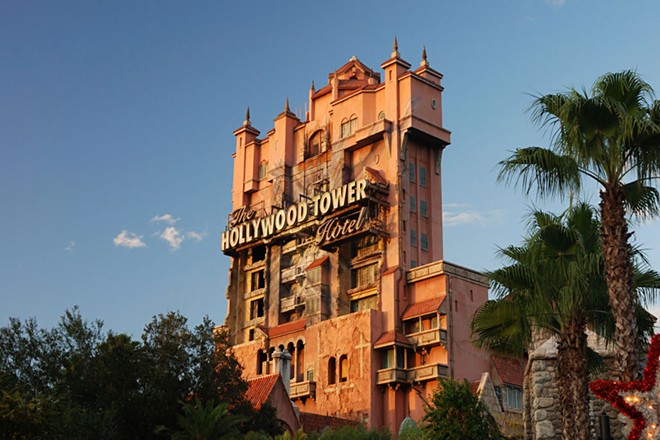 Photo by Alexf via Wikipedia
As Disney's Hollywood Studios prepares for record attendance this coming winter when the highly anticipated Stars Wars: Galaxy's Edge opens, many of the smaller items around the park that have needed some updating in recent years are finally getting the attention they deserve.

Pathways are being refreshed, and restaurants are getting better crowd-flow features. Over on Sunset Boulevard, the Rock 'n' Roller Coaster has received a new FastPass+ entrance. Next door at the Tower of Terror, a refurbishment is planned to begin within the next few months and last until this fall.

The extended refurbishment will see Tower of Terror operating at half or less capacity during the busy summer months. In recent years, the shafts have operated with different programming abilities, with only one reportedly having the ability to be truly random. In recent weeks, guests have reported loud mechanical sounds coming from the ride and doors not opening like they should.

Insiders, including seemingly always in the know Martin on the WDWMagic forums, have noted that the refurbishment has been planned for some time.

The timing, though, might have something to do with the new Star Wars attractions planned for the park. The Rise of Resistance ride will be using a similar ride mechanism to that of Tower of Terror as part of the climactic final scene on the ride. Disney might have been waiting to work on both of these rides near the same time.

While most of the refurbishment will be focused on the ride itself, guests will notice small touch-ups to the pre-show area where newer televisions and lighting enhancements are likely.

What is less likely to occur during this refurbishment is the rumored name change for the attraction. Despite reports last year of a coming name change, there is no indication at this time that the Twilight Zone branding will be dropped from the attraction.

With CBS now partnering with Jordan Peele to revive the iconic television series come April, some speculated that Disney's use of the intellectual property would come to an end. Most of the marketing and merchandise related to the attraction doesn’t feature the Twilight Zone branding, though those familiar with the agreement have stated that has more to do with royalties than theme park plans.

Eventually, the Twilight Zone branding will likely be replaced with Disney's own internal branding, but that doesn’t seem to be the plan for this quick refurbishment because such an update would require far more extensive remodeling, forcing the attraction to close. Such an option isn't practical while the park has only a handful of attractions.

To accommodate the lower capacity, FastPasses for the attraction will be more limited this summer, but longer than normal standby lines are still expected. The refurbishment should be finished ahead of this fall's massive influx of fans seeking to be some of the first to experience Star Wars: Galaxy's Edge and Mickey and Minnie's Runaway Railway.

Sadly, the long-forgotten rumors of a Tower of Terror-themed bar also seem unlikely to happen with this update.