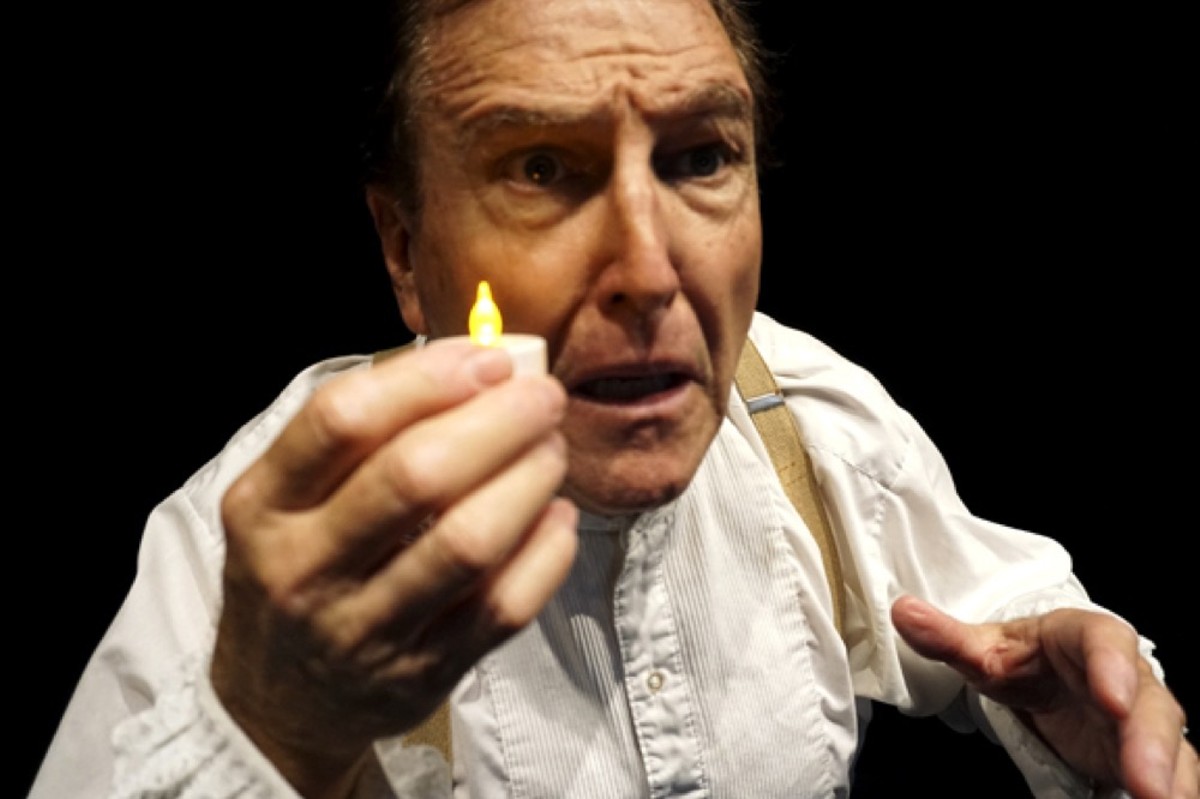 As a secular Jew, during the holiday season you're far more likely to find me at a winter solstice celebration than Midnight Mass, but there is one Yuletide ritual I attend to religiously: the annual recitation of the Book of Dickens, better known as A Christmas Carol. Orlando's theaters have observed this sacred rite for ages, and while some beloved long-running local productions of Scrooge's story (such as Theatre Downtown's full-cast adaptation and Robin Olson's three-person Dickens by Candlelight) have ended, you can always count on other area troupes [full disclosure: including Phantasmagoria, which I co-produce] to carry on the annual tradition.

However, one recurring take on this ghostly tale has been haunting Central Florida's stages even longer than I have. On Sunday and Monday, Dec. 22 and 23, David McElroy presents his One Man Christmas Carol at Penguin Point Productions (pen guinpointproductions.com), making 2019 the 22nd consecutive year he has transformed into the avaricious Ebenezer, the tremulous Tiny Tim, and 35 other characters from Dickens' holiday-defining chestnut. I recently spoke with McElroy and his partner, director Marylin McGinnis, to learn about the development of their take on this cherished classic and how they've witnessed Orlando's theater community evolving along with it. 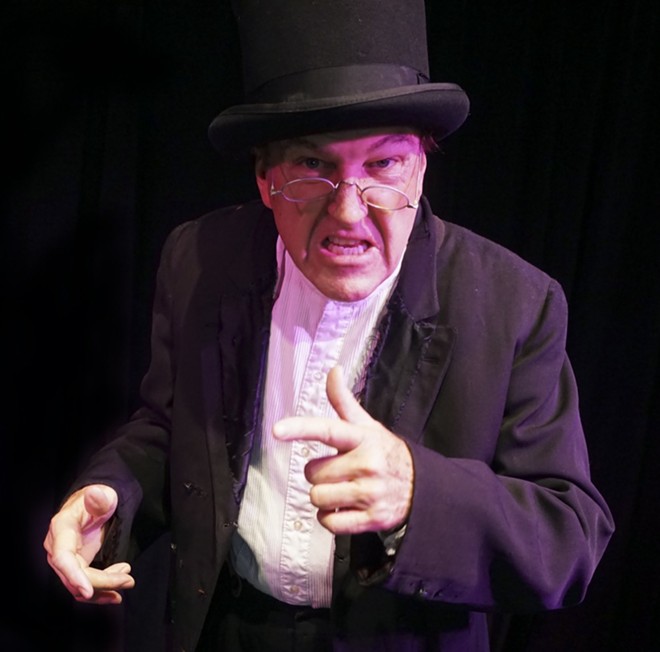 McElroy has been an actor for "probably over 40 years" and has been writing plays since the 1980s, with five produced one-man shows to his name. An Oklahoma native with a master's degree from University of Arkansas, McElroy was a self-described "nomad" wandering from coast to coast until meeting McGinnis while they were both performing summer stock in Wisconsin. After spending several years in both New York and Minnesota, the couple and their children moved to Orlando in 1995. "We heard all about the great stuff that was going on at Universal and Disney, and all the different television shows that were going on," says McElroy.

That was the era of the Civic Theatre and Mark Two Dinner Theater, before many of today's major theater companies existed. When nobody else showed up for a scriptwriting seminar, McElroy and McGinnis joined with friends to found Playwrights' Round Table, which has now mentored emerging authors for over 20 years. The pair also created Southern Winds Theatre, which produced the very first play I ever reviewed for Orlando Weekly.

Even after all these years, "we still don't have a theater space," says McElroy, a common refrain among local producers. "We kind of pop up here and there when we have something going on, and of course Christmas Carol every year." That show itself started at a Thornton Park venue that has long since vanished, and originated in 1997 after McElroy heard a recording of Patrick Stewart's one-man Christmas Carol on Broadway. Their adaptation began as a full-scale production featuring a substantial set and elaborate masks, but "we found that was a bit cumbersome," says McElroy, "so the next year we ditched all that and just used a chair, and that's what we've been doing for the last 21 years."

During those decades, McElroy has performed the show at Seminole State College, Stardust Video & Coffee and Blue Bamboo, not to mention countless private houses, churches and retirement homes. This year, they're helping James Brendlinger (whom McGinnis calls "a really solid guy") celebrate Penguin Point's first Christmas at Oviedo Mall. Brendlinger in turn calls the show "a true Central Florida holiday tradition," saying that he's thrilled that Penguin Point is "the latest stop in the 22-year journey."

Although it has been edited slightly over the years, eliminating a few minor moments, the script still sticks close to Dickens' original text, aside from some elaborations inspired by McElroy's other favorite interpretation, the movie musical Scrooge starring Albert Finney. And while he admits he loves playing Scrooge, McElroy says his favorite character to inhabit is Mrs. Cratchit, because "she is very strong, and very vulnerable, and that's the way Marylin has shaped her for me." 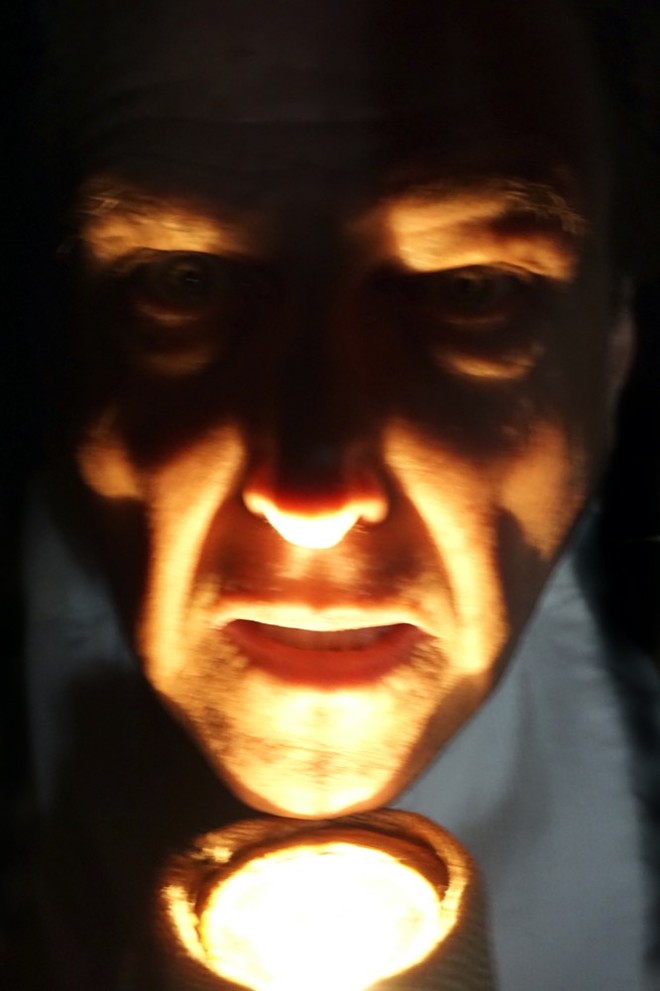 For her part, McGinnis says that "keeping it fresh" has been her main job as director over the years, which she accomplishes by concentrating on "delving into the characters more and more" and adding more interaction between McElroy and the audience, without losing sight of the simple story at the heart of what she suggests has become a kind of nondenominational Testament.

"It really doesn't matter what religion you are," she says. "I think everybody relates [to Scrooge's redemption], no matter what religion: Christian, Jewish, atheist, whatever. That there's always a possibility of change for the good. I think that's why it's played for so many years."

This year's production is extra special for McGinnis and McElroy, because it's the second time that their daughter Chloe – a UCF graduate who made her Christmas Carol stage debut at age 6 as a caroler – will be running the sound board.

"It's really great, she knows most of the lines," says McGinnis. "She's actually really fabulous with script analysis ... it's really fun to have her opinion in there as well." McElroy says he hopes that family feeling will extend to the audience as well, adding, "What's it's all about for me is to bring everyone together in a holiday spirit of camaraderie, because there's so much division nowadays with things, it makes me feel good to say 'God bless us, every one.'"

– This story appears in the Dec. 18, 2019, print issue of Orlando Weekly. Stay on top of Central Florida news and views with our weekly Headlines newsletter.