This move will expand access to care for up to 9 million, or roughly half of U.S. veterans who are not already enrolled in the VA. Under a new policy from the U.S. Department of Veterans Affairs, the VA will cover all emergency mental healthcare services at no cost for veterans experiencing an "acute suicidal crisis" — including for vets who are not enrolled in the VA healthcare system.

An "acute suicidal crisis" is defined as a person who "was determined to be at imminent risk of self-harm by a trained crisis responder or health care provider," according to department documents.

"This is a policy that will save lives," U.S. Rep. Darren Soto, who represents Osceola County and parts of Orange and Polk Counties, wrote in a tweet Tuesday.

According to the VA, this move will expand access to that emergency healthcare for up to 9 million, or roughly half of U.S. veterans who are not already enrolled in VA healthcare services.

Under the policy, the VA will provide or pay for costs for emergency suicide care at VA facilities, or reimburse veterans for care received at non-VA facilities. The department will also cover transportation costs, appointment fees and expenses for up to 30 days of inpatient care and 90 days of outpatient treatment. Referrals for clinically appropriate VA programs and benefits following the period of emergency care are also made available under the policy.

According to the Orlando VA Medical Center, this will apply to all veterans with at least two years of service with any separation status except dishonorable discharge, as well as former members of the armed forces (including reserve service members) who served more than 100 days under a combat exclusion or in support of a contingency operation, and veterans who were victims of physical assault of a sexual nature, battery of a sexual nature or sexual harassment while serving in the armed forces.

"Emergent suicide care ensures, to the extent possible, immediate safety for the individual and reduces the severity of distress, need for urgent care, or likelihood that the severity of distress or need for urgent care will increase during transfer of that individual from the facility where they received care," a spokesperson for the Orlando VA system told Orlando Weekly over email.

The goal of the new policy is to help curb suicide among those who've served by reducing cost barriers and bureaucratic barriers for veterans with mental health struggles. It's part of the VA's 10-year National Strategy for Preventing Veteran Suicide, first released in 2018 and a "top priority" of the Biden administration, per the VA.

Risk factors for suicide among vets include easy access to lethal weapons, a history of trauma, mental health and substance use conditions, very stressful life events (like living through a pandemic or the loss of a loved one), financial strain and housing insecurity. For instance, eviction, homelessness or foreclosure — problems not uncommon in Central Florida's unaffordable housing landscape.

The Orlando VA Health System, the fourth-largest VA medical center in the country, provides healthcare services from 13 locations across east Central Florida including the Orlando VA Medical Center, various community outpatient clinics, and a mobile unit based at the VA clinic in Winter Park. According to the Orlando VA's public affairs officer, their system serves about 141,000 veterans across their Central Florida service area.

While veterans are at an elevated risk for suicide, there are factors that can help mitigate that. Comprehensive suicide prevention, according to the CDC, includes coordination across healthcare, housing, employment, public health and other sectors to address the issue holistically.

Veterans experiencing a mental health emergency can contact the Veteran Crisis Line by dialing 988, then pressing 1, or by dialing 1-800-273-8255. You can also text 838255 or visit VeteransCrisisLine.net for help. Locally, you can find additional resources here from the Orlando VA and other veterans resources in Orlando. 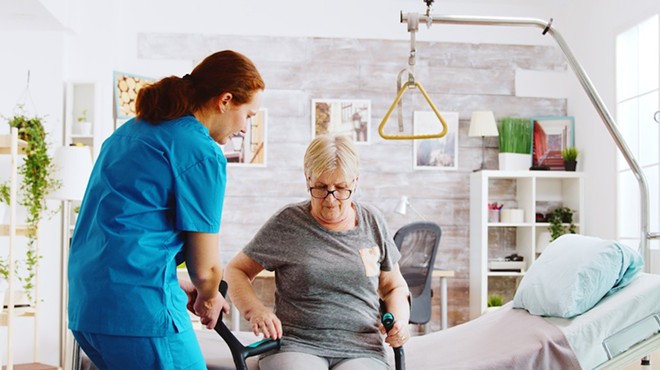 Florida military veterans’ nursing homes struggle with staffing shortages: Many veterans homes have had to turn to costly staffing agencies.