Speaking up about Orlando Speaks 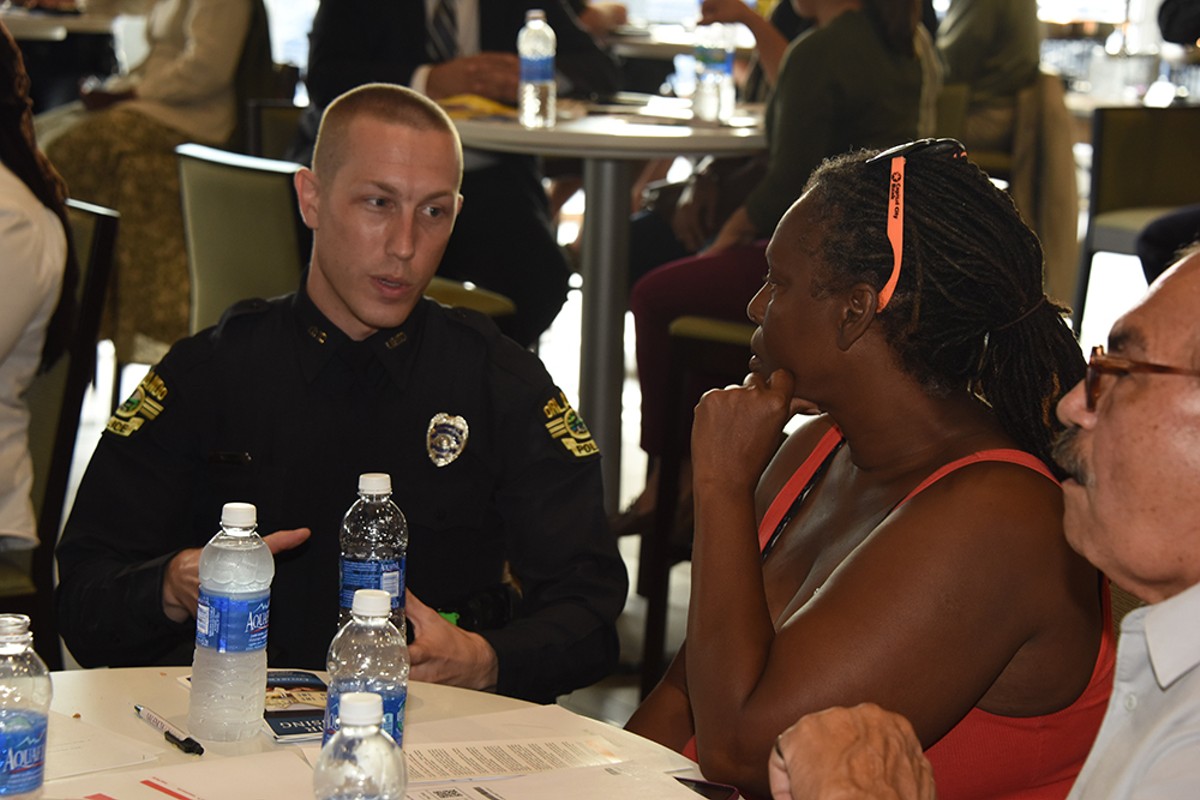 Held at the premium indoor club in the Citrus Bowl, the event was prefaced by a protest by National Action Network Central Florida Chapter president Lawanna Gelzer, other organizers and members of the community, who were later invited inside. Gelzer said the event, which was advertised as using "innovative communication strategies to foster ongoing citizen engagement and conversation" between city residents and police, did not truly include the community.

Gelzer said she received an email inviting select individuals to the event, but that it should have been open to all. Michelle Guido, public information officer for the Orlando Police, says that participation in the event was initially open to the public for sign up, but it filled up quickly. The event was organized into 40 tables of four participants each, with at least one OPD representative at each table. By this calculation, 160 people would have attended the event, with about 120 of them having no affiliation to the police (three days after the event, the city said that "nearly 200" people were in attendance).

"I question the process," Gelzer said. "The city can't conduct its business like this and not invite the community. I got an invite, but I can't speak for everybody."

Mayor Dyer said he thinks the Orlando Police Department has a good relationship with the community, but the city is committed to improving upon it. There is already another Orlando Speaks session scheduled for Oct. 13 at Edgewater High School.

"We've seen on the national level when departments aren't working, the divide that can come out," he said. "This process is going to get some of you out of your comfort zone ... but it really is a positive experience."

Chief John Mina says that 30 officers were at the event, but more wanted to participate. He said that he would not put up with excessive-force cases.

"[Police officers] are human," he told participants. "We make mistakes. But what I promise you is that those incidents will be thoroughly investigated, and if appropriate those officers will be held accountable."

(Just three days after Orlando Speaks, a cell phone video of an Orlando police officer fighting with a homeless man was aired on WESH 2 News. The Orlando Police Department is investigating the incident, but police say the officer's body camera video, which will be released when the investigation is complete, shows that the homeless man threw the first punch.)

Police officers and residents shared their stories about law enforcement among their small groups of four and then some of them shared with the general group. One retired officer said he recalled that as a young officer, he stopped a black man riding a bicycle for a small city ordinance infraction, with the intention of searching him. The situation escalated because the man was angry he stopped him and verbally threatened the officer, leading to his arrest. Later in his life, the officer realized the man was probably stopped constantly by police and felt harassed.

"From my perspective, it was a common police practice, and I had a legal basis for the stop," he says. "I didn't see him as a person. I saw him as an outcome. Looking back at my actions, if I had seen him as a person, maybe I wouldn't have stopped him."

The mood turned somewhat tense when Peace and Justice Institute instructors Rudy Darden and Mollie McLaughlin acknowledged systemic racism and white privilege. "Being colorblind is not a solution for us," McLaughlin said. "I hope we live in a world one day where that is true, but to move too quickly to that place covers up a festering wound."

Many participants, like Charlotte Fleming from the First Unitarian Church of Orlando, said the workshop was a positive experience. She called it "the best diversity training" she's ever been to and learned more about police perspectives.

Others, like T.J. Legacy-Cole, disagreed, calling it a "missed opportunity," and not what the community needed. Legacy-Cole stood during the event and outlined what he and other organizers wanted from police, including mandatory body cameras that can't be shut off, an independently elected citizen police review board, immediate termination of police officers caught lying in a report, a tracking system for police complaints and training for responding officers that focuses on mental health issues.

"We talked about white privilege, but where were the tangible solutions?" he asked. "They keep talking and we still see instances of excessive force. ... We want a meeting with police, elected officials, the community, the clergy and others to come up with a comprehensive agenda with policy changes."

Natalie Jackson, the attorney for Noel Carter, a man who was was kicked, struck with a baton and pepper-sprayed by two OPD officers during his arrest in June because they said he was resisting, was also at the event.

"It was a nice race-relations workshop," she says. "I thought it was valuable, but it wasn't dealing with people's concerns, which is the use of a government entity to abuse. It was not a meeting between this community and police."

Quoting Martin Luther King Jr., Jackson says the workshop's goals to change sentiments between police and the community would be difficult and near-impossible to do without actual policy changes.

"Morality cannot be legislated, but behavior can be regulated," the quote says. "Judicial decrees may not change the heart, but they can restrain the heartless."