Raising a toast to the legal system 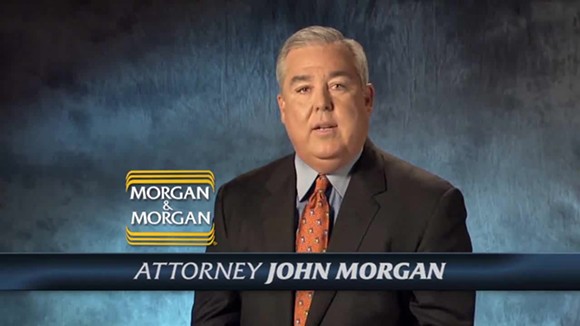 FLORIDA FLASHBACK, Feb. 5, 2020 | This gem from the Orlando Weekly archives from 22 years ago reminds us that the man who ensures justice "For the People" has been a defendant himself, and quite the tough one. A spoiler for those wondering: Morgan, then only 41, escaped severe penalties and has successfully practiced law ever since.

Morgan, 41, a managing partner and the designated mouthpiece of that most visible of law firms, Morgan, Colling and Gilbert — "For the People" — faced up to five years in jail after being charged with battery on a police officer. According to police reports, Morgan twice head butted, then hit with his left hand, the Casselberry officer who had pulled him over on Dec. 10 on suspicion of driving under the influence of alcohol.

The officer, who reported that Morgan also verbally assaulted him with taunts of "baldy" and "fat fucker," arrested Morgan and lodged the felony battery charge, as well as DUI and three other minor traffic charges.

Prospects were dim for Morgan, a prominent Orlando figure, who has moved into other lines of business after helping to build the firm that pitches clients in radio and TV advertisements and files lawsuits involving medical malpractice, workers compensation and personal injury. The felony conviction could have cost him his license to practice law, not to mention his freedom or lofty community status.

On Jan. 29, Morgan was to appear before a judge for arraignment on the felony charge. Instead, assistant state's attorneys working in the office of Seminole County State's Attorney Norman Wolfinger announced they had come to an out-of-court settlement of sorts with Morgan and his attorney, Stuart Hyman. In return for a plea of guilty to DUI, assistant state's attorney James Carter says, Morgan will face no felony charge.

"Based on the facts, battery on a police officer was chargeable but not a really strong case," Carter says. A video of Morgan hitting the officer shows that the Orlando lawyer merely slid his hand over the top of the officer's head. And two other officers expected to support the headbutt allegations told prosecutors that they hadn't seen anything, Carter says.

"It comes down to the word of the police officer versus Mr. Morgan," he says.

Further complicating a successful prosecution of the battery charge: intoxication is an acceptable defense. Instead, Morgan has agreed to pay a $500 fine plus court costs, and attend seminars advocating against DUI and for victim awareness. Morgan also agreed to serve 50 hours of public service, although he can pay his way clear of that commitment. A six-month driver's license suspension runs concurrently with the one-year license suspension he was given because he refused the breath test designed to measure his intoxication level. Finally, while the law provides for up to six days in jail on a first DUI conviction, Morgan will serve no jail time.

"When you look at what's a fair and adequate handling of the case, this is what we came up with," Carter says. "I don't expect the officer to be too happy with it."

While insisting that Morgan's sweet deal "has nothing at all to do with who he is" and that "this is not an uncommon resolution," Carter concedes that his office was glad to be able to avoid a lengthy court fight with Hyman, who filed more than 10 motions before winning a reduction from DUI to reckless driving for Morgan in 1993. Had Morgan been convicted of DUI in that case, he could have faced a mandatory 10 days in jail this time around.