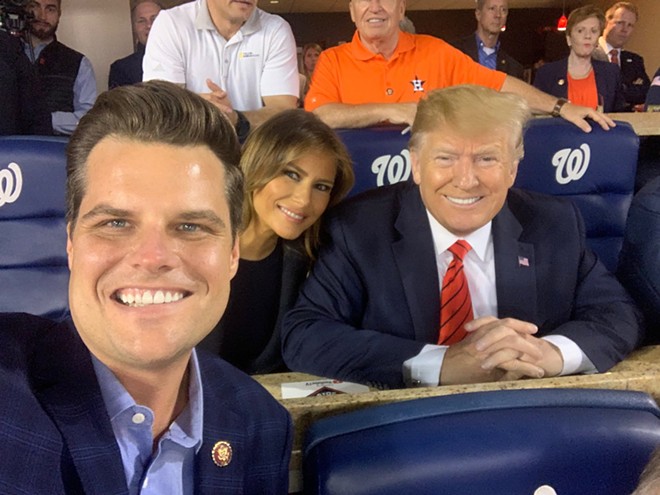 Noted creep and US House Rep. Matt Gaetz is not ready for a potential Ron DeSantis run for president.

Shortly after the Florida governor and presumed frontrunner for the GOP's 2024 ticket won re-election, Gaetz penned an op-ed in the Daily Caller saying that the next presidential election is Trump or nothing.

"The job President Trump started was not finished. Only Trump can be trusted to enact the 'America First' agenda he ran on in 2016. We won’t accept any imitation," he wrote, in a piece positioned as a counterpoint to a pro-DeSantis column. "Despite what many Washington, D.C., conservative elites want you to believe, we are not in the 'post-Trump era' or close to it. We are still in the midst of the revolution started by Trump when he rode down that golden escalator."

While Gaetz doesn't mention DeSantis by name, he swipes sideways at the governor by taking a shot at one of his biggest donors.

"Just look at who is lined up against Trump already in the 2024 primary," he wrote. "It’s folks like Paul Ryan or billionaire mega-donor Ken Griffin, who is planning to back a Trump challenge."

Gaetz has long been a Trump booster and is part of the wave of younger populists that make up the former president's base. That desire to stick close to Trump makes sense even outside of political beliefs as Gaetz was reportedly seeking a pardon from the prez when he was under investigation for sex trafficking allegations.

While allegations against him fell apart due to perceived witness credibility issues from investigators, it certainly can't hurt to be a visible booster in the very state where Trump's most likely challenge will arise, on the off chance that more allegations surface.