saved the puppy from getting eaten by an alligator and never dropped his cigar, a true legend pic.twitter.com/ryRSfZqOsy

A wildlife camera captured a man jumping into a pond, gabbing an alligator, ripping its jaws open, and pulling out his pet dog, all while never dropping his cigar.

According to Wink News, Richard Wilbanks, 74, was walking his Cavalier King Charles Spaniel puppy, Gunner, along a pond in Estero, Florida, when a gator jumped out and pulled the dog in.

“He just came out like a missile,” said Wilbanks to the station, adding that his adrenaline and instincts kicked in. “They’re like children to us, so there was no second thought whatsoever,” said Wilbanks.


The incident was caught on a surveillance camera from the Florida Wildlife Federation and the fSTOP Foundation, which usually captures clips of deer or bobcats.

Wilbanks told Wink that his hands were “chewed up” and Gunner suffered a few puncture wounds in his belly, but is expected to recover.

The Florida Fish and Wildlife Conservation Commission released a statement, saying while alligator attacks are rare, Florida residents should be cautious, especially when walking pets near water.

“We encourage everyone to take precautionary measures, particularly those who live or recreate near the water,” said the FWC. “Dogs and cats are similar in size to the natural prey of alligators. Do not allow pets to swim, exercise or drink in or near waters that may contain alligators. Keep pets on a short leash and away from the water.” 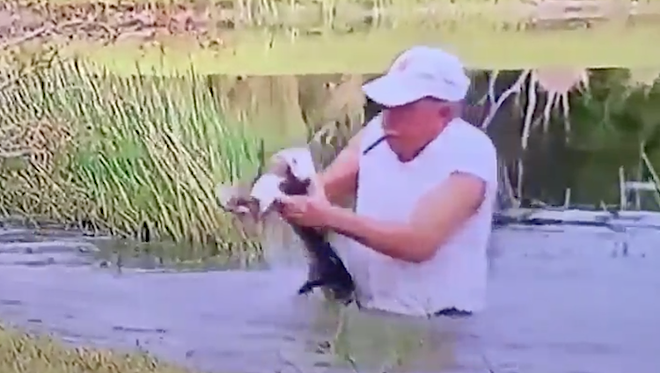