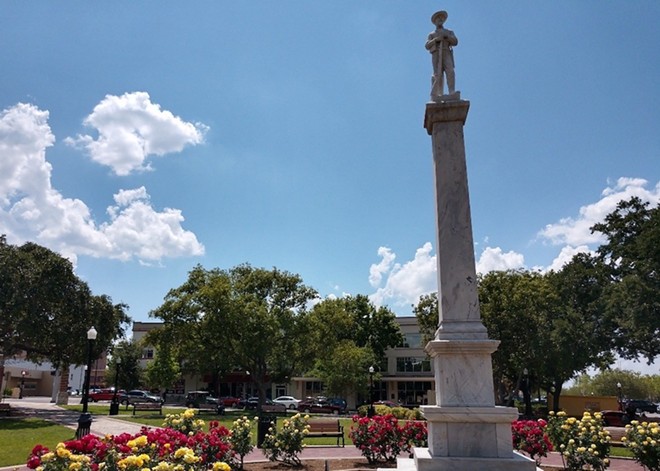 Photo via City of Lakeland

Amid national debate about symbols of the Confederacy, a federal appeals court Monday rejected a challenge to a decision by Lakeland officials to move a Confederate monument.

A three-judge panel of the 11th U.S. Circuit Court of Appeals ruled that opponents did not have legal standing to challenge the monument’s move, saying they did not allege “a concrete, particularized injury.”

Several plaintiffs filed the lawsuit after Lakeland officials in 2018 decided to move from the city’s Munn Park to Veterans Park a monument to Confederate veterans who died during the Civil War. Monday’s ruling described the monument as a “cenotaph” that is 26 feet tall, weighs about 14 tons and is engraved with the words “Confederate dead,” a poem and images of Confederate flags.

Munn Park is in Lakeland’s historic district, while Veterans Park is not, according to the ruling. The city in 1908 gave permission to the United Daughters of the Confederacy to erect the monument in Munn Park.

The plaintiffs, including individuals and groups or representatives of groups such as Save Southern Heritage, Inc., Sons of Confederate Veterans, Veterans Monuments of America, Inc. and Southern War Cry, alleged that the decision to move the monument violated constitutional First Amendment and due-process rights.

The city in 1908 gave permission to the United Daughters of the Confederacy to erect the monument in Munn Park.

The ruling said the plaintiffs argued that the relocation of the monument infringed on their interests in such things as “preserving the history of the South” and “expressing their free speech from a Southern perspective.” But the appeals court described such alleged injuries as “pretty amorphous.”

“At bottom, it seems to us, the plaintiffs endorse some meaning that they ascribe to the monument; they agree with what they take to be the cenotaph’s message because it aligns with their values,” said the 26-page ruling, written by Judge Kevin Newsom and joined by judges Beverly Martin and Diarmuid F. O’Scannlain. “And because they agree with that message, they disagree with —- object to —- the monument’s removal from Munn Park. But the plaintiffs’ inchoate agreement with what they take to be the cenotaph’s meaning or message —- and their consequent disagreement with the monument’s relocation —- does not alone give rise to a concrete injury for Article III (standing) purposes.”

While the lawsuit was filed in 2018, Monday’s ruling came during disputes in Florida and other parts of the country about whether Confederate monuments and symbols, such as flags, should be removed. The disputes have been refueled, at least in part, by widespread protests about abuse of African-Americans by police.