To: Mayor Buddy Dyer
From: Your friends at Happytown™
Re: The second coming

A few weeks ago, we celebrated the death and resurrection of our Lord and Savior Jesus Christ. And now it's your turn, Buddy.

Six weeks ago, you were the scorn of the city, shamefully indicted and suspended from office for hiring a consultant to collect absentee ballots. Just as the city geared up for a special election, prosecutor Brad King decided to dismiss the charges. Congratulations.

But there are some dark clouds on your horizon, Buddy. Your poll numbers are abysmal, and rumors are already in the mill that either the police union or someone else is going take a swing at a recall. (See second item.) And frankly, you've been a terrible mayor. At one time we thought you offered fiscal sanity, a government that operated in the open, a renovated Parramore and a downtown for adults. You're 0-for-4 on that scorecard, though developers seem to have a particular fondness for you.

The city faces a $27 million deficit next year. Can't blame this one on Glenda Hood, either. And now all this talk about a new or renovated TD Waterhouse Centre, about as unpopular an idea as you could conceivably hatch at the moment. Keeping the Magic is fine, but handing out taxpayer dollars to a billionaire is silly talk. The polls aren't wrong on this one, Buddy. If Rich DeVos wants to pony up some of his own lucre, and if the Magic want to negotiate in good faith, super duper. But if they want welfare, tell them to kiss your Irish ass. You're the mayor. You're allowed to do that.

And how much money are you willing to throw at a new performing arts center? How much for a renovated Citrus Bowl? Both are deserving projects, but they're for another day.

This talk about a new era of openness is great, but whatever good feelings your return inspires are tenuous at best. The first time you hook up a crony with another taxpayer subsidy this city will turn on you like you're a bleeding tuna in shark-infested waters. You were gone for less than six weeks and the city commission kicked David Dix to the curb. (See third item.) That wasn't a vote of confidence.

Fix the budget, get serious about Parramore and start treating your constituents like adults. Yes, that means extending drinking hours. It also means conducting city business in the open. If you make a mistake, admit it. We'll forgive you. This is your second coming, Buddy. There won't be a third.

Within hours of his return to City Hall, rumors were already swirling that a recall effort against Dyer is on the way, and should be here around June 1 – the one-year anniversary of the beginning of Dyer's first full term and the first possible date, according to the city charter, that the mayor becomes eligible for removal from office. A phone call later, those rumors became not-so-veiled threats.

"We've got no comment about that at this time," Orlando police union chairman Sam Hoffman tells Happytown™.

See, for the last eight months or so the union and Dyer haven't been bestest buddies. Dyer says he's trying to hold the financial line in the ongoing contract negotiations and give the cops the same raises he gave everyone else. The cops say Dyer negotiated in bad faith, and have tried to annoy him at every turn.

"We're always considering our options," Hoffman continues. "The city goes back to the bargaining table on Monday and Wednesday of next week `April 25 and 27`. Depending on the outcome, we may have additional comments for you … . If things go south, there will be additional reporting for you guys to do."

Subtle he is not.

And even if the police union doesn't haul Dyer into the alley, you can bet someone (read Doug "Ax the Tax" Guetzloe) will. Guetzloe came close to recalling Glenda Hood in 1999, and a state law change will prevent the city clerk from shelving the recall petitions and preventing the petitions from going to the ballot, as happened then. Whether Guetzloe has the political muscle to pull it off is debatable. But keep in mind that Dyer's a not-very-popular guy pushing a not-very-popular project (a new arena).

"It's gonna happen," Guetzloe says. "I have no doubt about it."

Doug Head, the former Democratic Party chairman who now runs CountyWatch, says the recallers would probably look "petty and vengeful." True, but that doesn't mean they wouldn't have a chance of winning. "`Dyer` gets a few months to turn it around," Head says. "`The question is`, is he going to be smart politically?" (See above item.)

Happytown™ missed the meat of the Dyer comeback party at the Embassy Suites April 20, but we're sure it was a wonderful time for those who stuck by Buddy and those now clamoring to get back in his good graces.

But to answer Doug Head's question above, some information passed along by one of our sources suggests that Dyer, indeed, might not have the political acumen to right his ship. Why? Two words: David Dix. Dix has been Dyer's right-hand man for as long as Dyer's been a politician. Dyer made him chief of staff when he first took office, but Dix later resigned that post after he became a lightning rod. A few months later, Dyer brought him back as a sort of unofficial chief of staff, and charged him with working a deal for the arena with the Magic.

Until Dyer was suspended, and the city council – most of whom loathe Dix – pounced. On April 4, Dix announced his resignation – again – but only because the council was going to can his ass at the next council meeting. Then Dix went to work for Cameron Kuhn, perhaps the biggest recipient of the Dyer administration's largesse. Coincidence?

With the return of Dyer, Dix may be popping up yet again. Our source tells us Dix wrote Dyer's victory speech, and was in the greenroom lining up the evening's speakers. At press time, the Mayor's office could not confirm whether or not Dix wrote the speech. 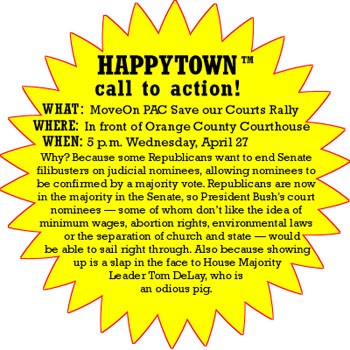