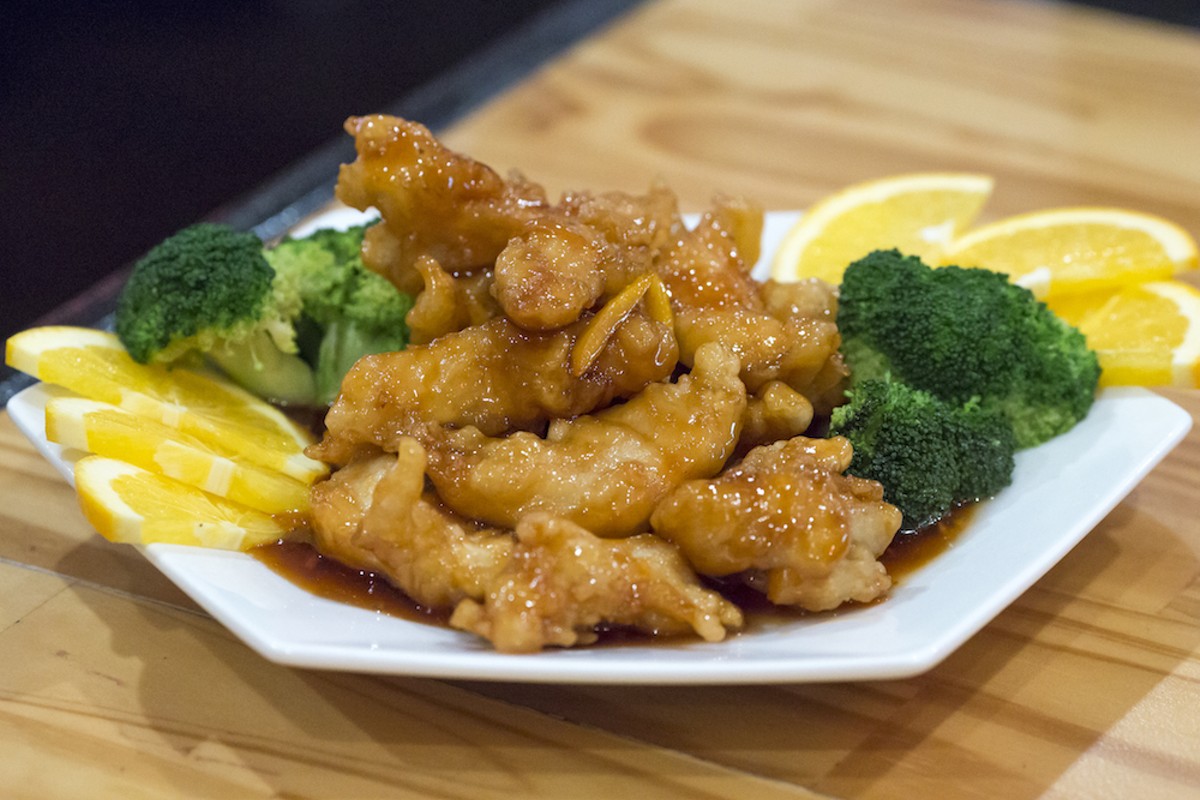 Peter Leung has been responsible for two of the finest Chinese restaurants to grace this city's streets. His fare drew the dim sum cognoscenti to Ming's Bistro just off Mills Avenue, and summoned beef chow fun fanatics to Tasty Wok on East Colonial Drive. Now, on relinquishing ownership of both restaurants, Leung has opened his namesake house of Hong Kong cuisine in a space that most recently served pollo a la brasa and other Peruvian staples.

In fact, much of the interior at Peter's Kitchen hasn't changed since its Gaviota Brasas days, but the vibe is a lot more lively and bustling, particularly during weekend dim sum service. That's when carts stacked with bamboo and metal steamer baskets roll out such delights as pork and shrimp siu mai dumplings ($3.85), chicken feet with black bean sauce ($3.85), pan-fried turnip cakes ($3.25), steamed egg custard buns ($3.25) and beef cheong fun ($3.85). OK, so the rice noodle rolls of the latter were a bit too delicate, but that'll hardly mar your dim sum experience here, where seemingly every taste and texture combination can be had.

If you can't make it to Peter's Kitchen on the weekend, dim sum is served off the menu (no carts) during weekday lunch hours. But other Leung specialties are generating a fair bit of lunch buzz – most notably, the orange chicken ($10.95). Yeah, it's a Panda Express specialty (and invention), but it's hard not to like the fried, thickly battered morsels coated in orange-zested chili glaze. Personally, I prefer my orange chicken spiked with plenty of tien tsin peppers, but the dish is a safe bet for those not wanting to get overly adventurous. So is the beef chow fun ($13.50) – if you flocked to Tasty Wok for it, you'll flock here for it too, and those wide rice noodles didn't disintegrate.

And then there are those who get off on being daring and exploratory. For you, my friends, there are special dishes like pumpkin with egg yolk. It's a complicated, intricate dish with Japanese pumpkin steamed, dredged and fried, then fried again in a wok with duck egg yolks. Or the bean-curd clay pot ($15.95) with cuttlefish, scallops, shrimp and white fish, which will certainly cater to the seafood lover in you. So far, the Chinese eggplant stuffed with pan-fried shrimp ($4.95 on the dim sum menu) has to be one of my favorite dishes here.

Leung's wife, Teresa, and daughter Melinda work the front of the house, and Melinda is at the ready to offer suggestions, as it's easy to get lost in the menu. Her suggestion of butter lobster ($28.95) is one I'd readily second, considering how gloriously buttery and garlicky the sauce was. The lobster is plucked live from a tank before being hacked and fired in a wok. Order this.

Orlando has never been blessed with great Chinese restaurants, but Leung has made a concerted effort to change that, and we've happily followed him from one venture to the next. When it comes to Chinese food, Peter is our pied piper.

Goff's Drive In to reopen July 18