The Monroe in Creative Village is a paradigm of modern comfort, in design and cuisine 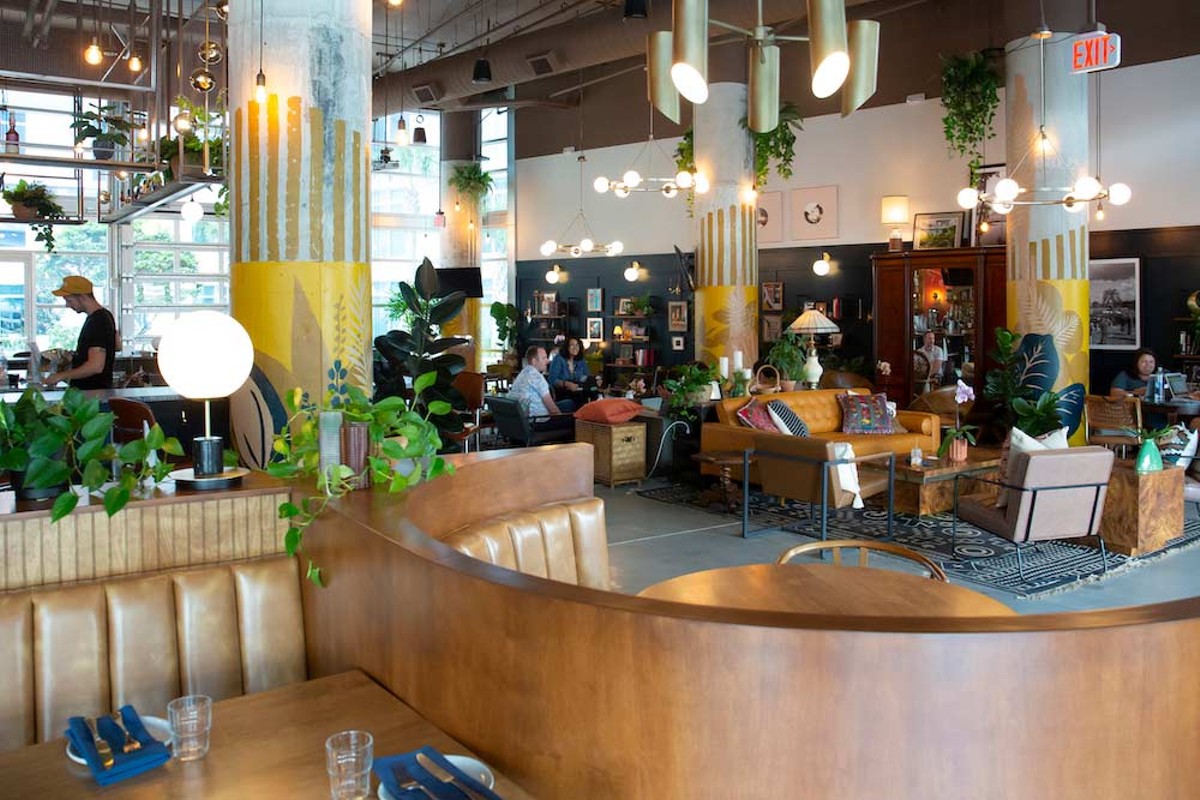 It's hard to overlook the contribution Asian Americans have made in moving our restaurant scene out of the dark ages of the '90s and early aughts and into an era of culinary enlightenment. Johnny and Jimmy Tung, Henry Moso, Hoi Nguyen, Tiger Tang, Lewis Lin, Nora Jain and Chau Trinh have all been instruments of positive change, but Jason and Sue Chin, the power couple behind some of the most well-received restaurants in the city have arguably wielded the most influence. Their latest, the Monroe, isn't just their most accessible, it's their most fetching, and if you've been to Seito Sushi, the Osprey and Reyes Mezcaleria, you know that's saying a lot.

Sue's design prowess in transforming a cavernous shell on the ground floor of the newly built Julian Apartments into a plush and stunning sanctuary of midcentury modernity shows. Its size reminded me of the now-shuttered Manufactory in DTLA, but the way the Monroe has been spiffed and furnished is unparalleled. Is there a more handsome restaurant in the city? I can't think of one. And is there a more handsome chef in the city than Josh Oakley? You bet there is, but the man does make some beautiful food, none more so than the fried chicken. He brines Bell & Evans chicken overnight before breading it in White Lily flour — "it's the Duke's Mayo of flours," he says — and what comes out of the fryer, be it thigh ($6), leg ($6), breast ($8) or wing ($10), is pure gold. Well, golden brown.

Oakley, of course, is no stranger to our food universe, having garnered a legion of devotees at the Smiling Bison for its Lil-Indies-meets-Ravenous-Pig vibe. Even after moving ops to Sanford, then leaving the Bison for 1921 Mount Dora, Oakley's wheelhouse has been in the realm of feel-good fare. It's of the approachably "modern" sort at the Monroe, and that works well in this Parramore restaurant named after Dr. William "Monroe" Wells, the man who opened the historic Wells' Built Hotel in the neighborhood back in 1926 for African American travelers.

That comfort is cooked into Oakley's menu makes it all the more fitting. He gets playful with chicken waffles ($14) — not chicken and waffles, mind you, but soft, springy waffles literally made of chicken and served with hot honey mustard. The Shake 'N Bake ham chop ($21) is another one to induce smiles and grunts of approval. On a recent visit, however, I noticed it was replaced with a BBQ Florida salmon ($24). That's right, salmon humanely and sustainably raised in a "bluehouse" in Homestead, Florida. It was a bit overcooked, but it didn't take away from the fact that this was a lovely cut of fish. In addition to local salmon (man, that sounds weird), local shrimp, eggplant, mushrooms, peaches, pumpkins and more seasonal items are a hallmark of Oakley's menu. I'm not sure where the pastrami-spiced sausages in the corn dogs ($11) came from, but I'm thinking out of this world given how addictive they were. That accompanying grain mustard, too. But if there are two dishes I'd put on the must-try list, it's the jerk-spiced chicken hearts ($8) served on skewers with pineapple, and the pan-roasted duck breast ($28) plated alongside a sour cherry-scallion relish spooned over purple-skinned Murasaki sweet potatoes. More, please.

Of course a hot chicken sandwich ($15) is offered. The one here comes with Sichuan-citrus oil, slaw and Duke's Mayo for plenty of twang, but what it needs is more heat. Given Oakley's Buffalo roots, I half-expected the sandwich to be served on a kummelweck roll, à la beef on weck, rather than a potato bun specked with sesame seeds. That said, I'm sure a contempo rendition of that Buffalonian staple will make an appearance on the menu sooner or later. In the meantime, a can or two of Thin Man's "Pills Mafia" ($7) should give homesick Western New Yorkers a fill of nostalgia. The bar program, by the way, is run by Shawn Newman (Prato, Bitter & Brass, the Guesthouse, Robinson Room), and the cocktails reflect the wealth of experience and knowledge he brings. He's part of a team that includes sous-chefs Robbie Lamison and Chris Parrett, who've done their part in placing the Monroe in contention for best new restaurant. Lamison also handles pastry duties, and his cheesecake ($11) — boldly dubbed "The perfect cheesecake" — with Luxardo maraschinos, sour cherries, fresh cherries and a cherry glaze lives up to the hype.

"He's kicking ass," says Oakley, then adds, "I'd be rudderless without those guys." Indeed, it's been relatively smooth sailing for Oakley and the Chins since the Monroe opened back in May and, if you ask me, it's the sort of restaurant that floats my boat.