The house that rice built

Paella headlines, but it’s seafood that features prominently at this East Orlando diner 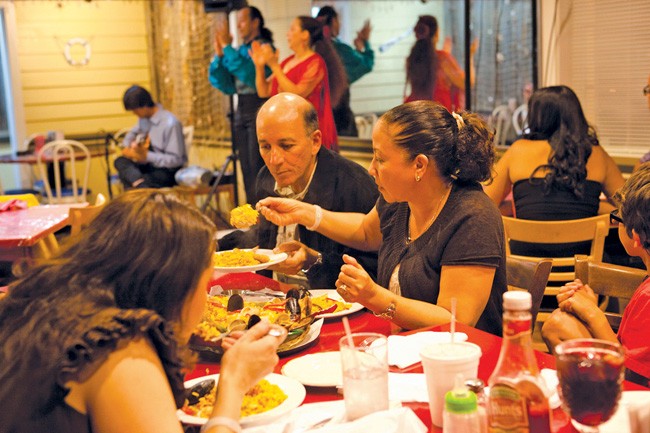 Of the 100-plus dishes on La Casa de las Paellas’ bill of fare, only seven are actually paella. I’m not suggesting there’s any fallacious advertising here, but “La Casa de los Pescados” or “La Casa de los Pollos” would be just as fitting. So why the emphasis on paella? Maybe because the exotic rice dish, like biryani and jambalaya, holds a special place in the pantheon of world cuisine. Many, myself included, find it hard to resist its enticing luster and heady saffron fragrance. In fact, paella’s cross-cultural and across-the-board appeal may explain the diverse group of diners inside the restaurant the night we visited. The fact that it’s located in the UCF corridor may have had something to do with it as well, but nonetheless, paella seemed to be the draw.

So when the pan of paella marinera ($34.95 for two) arrived, our immediate impression was a positive one: pimientos snaked, shrimp curled, mussels protruded and peas dotted the yellow-tinged rice. Then we noticed the expected sheen was lacking; the dish looked dry. Where were the lemon wedges? And where was the most prized component, the thing that could lead a mother and son to fisticuffs – the socarrat, the much-coveted layer of crisp rice on the bottom of the pan, was perhaps the most glaring omission of all. The paella wasn’t a bad effort at all, but with a few tweaks, it could have been so much better.

As at the restaurant formerly occupying this space, Captain D’s, seafood appears to be the focus. After poring over the countless options, we decided to try the chillo al ajillo ($17.95). The fact that the fried whole red snapper wasn’t heavy on garlic sauce let the flavors of the fish shine through. The cheeks, not surprisingly, were moist and succulent, though other portions of the fish weren’t.

Our pleasant server made every effort to see we were tended to and offered a recommendation in our search for a land-based creature to devour. After her enthusiastic endorsement, the bistec empanado ($10.95) arrived in a matter of minutes. The plate of pounded, breaded, pan-fried sirloin came with a side of sweet plantains, yellow rice and a bowl of red beans. The country-fried steak sans gravy allowed us to enjoy the crunch of the batter, but the finest fried fix of the evening was the chicharrones de pollo appetizer ($4.95). The morsels of bone-in fried chicken were crispy as pork rinds and the meat juicier than a Puerto Rican soap opera. We polished off the nuggets along with a basket – well, two baskets – of the buttered Cuban bread they generously served us.

Their generosity didn’t go unnoticed when a complimentary plate of quesitos (cheese-filled pastries) was brought to our table after we were told there was no flan or cheesecake available. Yes, the pastries were warmed in the microwave, but the kind gesture wasn’t lost on us. Such consideration fosters loyalty, even among those with an aversion to exotic rice dishes. Luckily for diners at La Casa de las Paellas, it’s easy to jump out of the paella pan and into the fryer.